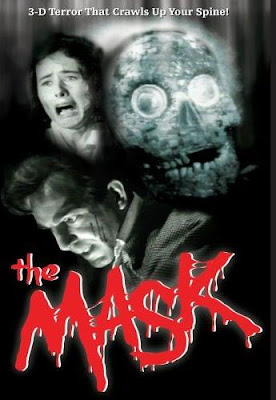 THE MASK
also called EYES FROM HELL
(1961, Canada)
Definitely a cult movie, early Canadian horror The Mask is finally out on DVD. In 3D!

I was going to include this in the Not On DVD movies. But after another viewing, I couldn't recommend it as a must-see. It's a cheap, dull story for the most part, only the 3D 'dream sequences' are really worth seeing. 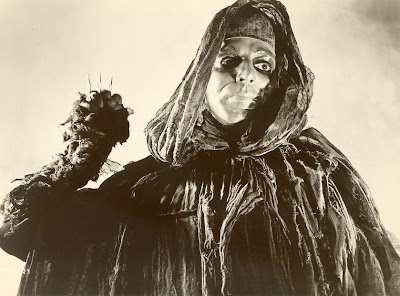 Really very good 3D effects and wild, horrific imagery, presumably shot by a different director. The 3D benefits from long tracking shots. I still think that the best 3D effects allow the viewer to 'get their bearings', like a camera moving through a deep hallway of cobwebs. The set designs and make-up effects are uniquely nightmarish and the shocks are carefully designed for 3D. A giant Aztec skull floating over a sacrificial ritual, a phantom firing fireballs from its palms, druids with razor-gloves... The stills you see from The Mask are always from these scenes, which tell their own dream-logic story. Joined together, they would make a far more famous 3D short film. 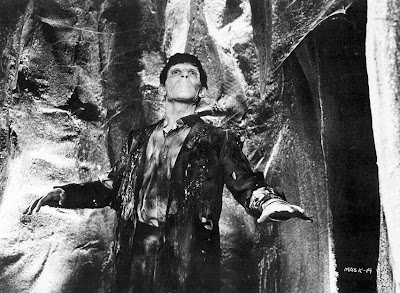 The Mask is OK to watch if you're used to low-budget fifties sci-fi. Most of the talky action takes place in small, functional three-wall sets. Where an archaeologist starts hearing voices coming from one of his artefacts, demanding that he wears it. When he does, he has nightmares about an ancient ritual... If you want a chance to see what a great 3D horror, or even LSD horror could look like, try out the dream sequences of The Mask... 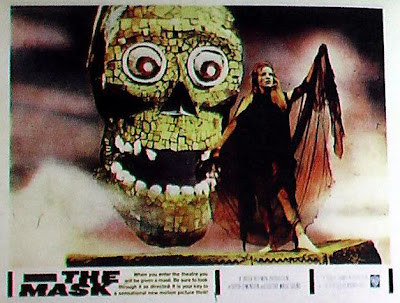 The DVD is from Cheezy Flicks. It's a black and white fullscreen movie (this lobby card was hand-coloured). It's misleadingly listed as colour, because it's presented in the red/green 3D process. From the reviews, it doesn't appear to have been digitally remastered. 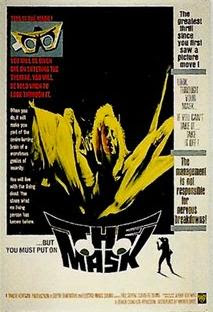 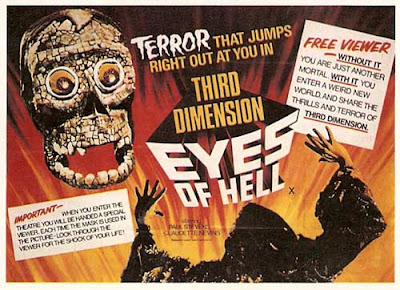