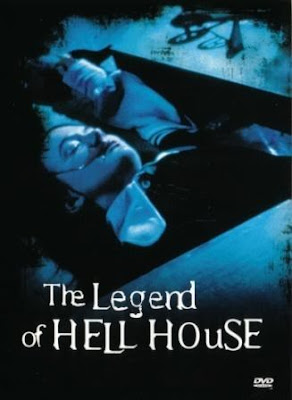 
In the 1970s, writer Richard Matheson set upon the foundations of gothic horror, with a mission to bring them up to date – placing a vampire on modern American streets in the influential The Night Stalker TV movie, and every other classic monster in the series that followed. In Matheson’s earlier novel, I Am Legend, he had vampires who could be explained scientifically rather than supernaturally. In his novel Hell House, he tackled a haunting from two directions, with psychics and scientists… 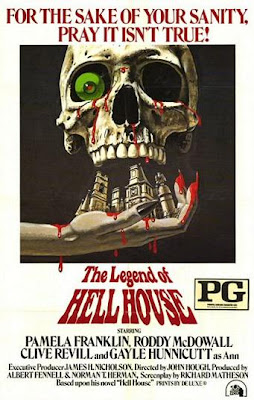 Four investigators come to “the Mount Everest of haunted houses” in order to solve its mysteries, even though the last attempt meant death for almost all of them. This is a similar plot to The Haunting (1963), which is far more critically acclaimed, but I much prefer Hell House, perhaps because I saw it in the cinema. The two titles are easily confused - Shirley Jackson’s book, The Haunting of Hill House, was shortened to the movie title The Haunting, while Richard Matheson’s novel Hell House had its title lengthened to The Legend of Hell House for the movie adaption. Are we clear?

The Legend of Hell House also beat The Exorcist into the cinema by six months in the US, they both have possessions, bad language and demons with sexual motivations. Hell House is far tamer, however and it’s structure is closer to Spielberg’s Poltergeist, while being far more serious in tone. There’s no comic relief in this old dark house… 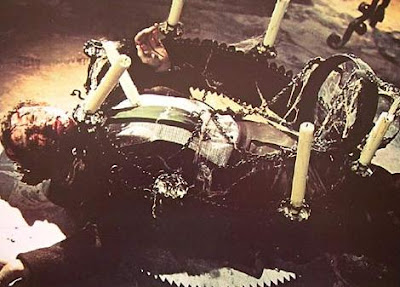 One of the team is temporarily possessed, and having a good experienced actress in the role makes Pamela Franklin’s performance an interesting comparison to Linda Blair, who was obviously a newcomer to the movies when she appeared in The Exorcist. Unlike the period costume horror films of the Hammer Studios, here was a British-made film in a modern setting. The devilish plot meant that here was one horror that kept on being re-released as long as movie double-bills survived in the seventies, which is how I got to first see it - in 1976 on a double-bill with The Antichrist an Italian Exorcist riff. 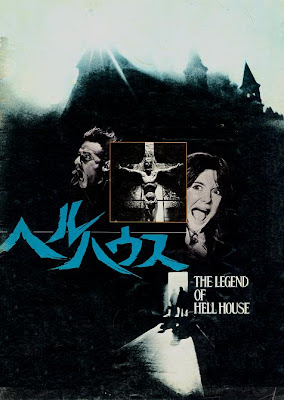 Hell House hits the ground running – there’s a brief set-up, then the team arrive at the house and they’re inside before the titles are over. The building is shrouded in fog (for days on end!). The movie is thick with atmosphere, created by the intense but largely restrained performances, aided by the distorting lens of wide-angle cinematography, and backed by Delia Derbyshire and Brian Hodgson’s electronic soundtrack. This superior accompaniment is more like vibrations than music. The two composers were from the BBC Radiophonic Workshop, and in 1963 it was Derbyshire who engineered the first extraordinary Doctor Who theme there, based on Ron Grainer's composition.

Though the reputation of the house is regularly refered to as a being a haven for murder and debauchery (loosely based on the stories about satanist Aleister Crowley), the film suffers by having no physical evidence lying around. Presumably to avoid censorship hassle, the resulting film is almost too tame, but still garnered an 'X' certificate in the UK. It’s creepy, violent, sexually violent, but tastefully pulls its punches. I think it’s still strong enough to please a modern audience. For a stronger version of the story, you'll have to seek out a copy of Matheson's book. 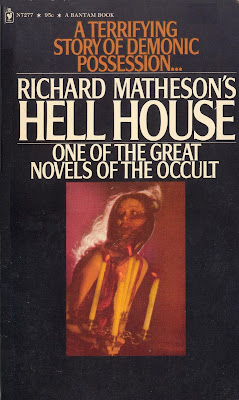 The small cast are marvellous, though Roddy McDowall’s American acting style is far broader than the rest of the cast, who successfully underplay. McDowall was just at the end of his many Planet of the Apes roles. Here he plays the only survivor of the previous incursion into Hell House, twenty years earlier. Another former child actor (her first role was in The Innocents) was the criminally underused Pamela Franklin, who made several cult horror films, like And Soon The Darkness, and then briefly returned to TV roles after the ridiculous The Food of the Gods. Pamela has the toughest part as an over-sensitive medium. 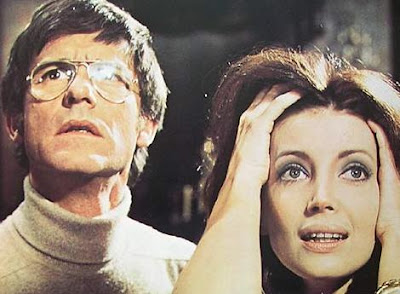 Clive Revill was better known as a comedy actor, as Dirk Bogarde’s sidekick in Modesty Blaise, and as a Russian aristocrat in Billy Wilder’s The Private Life of Sherlock Holmes. Here he excels as the project leader, designer of a machine that he hopes to cure the haunting with. Revill is still working, mainly in voiceovers – one of his famous early offscreen roles being the original Emperor Palpatine’s voice in The Empire Strikes Back. The lovely Gayle Hunnicut plays his wife – her other great horror role was Eye of the Cat.

I think this is easily director John Hough’s best film, over The Watcher in the Woods, and Twins of Evil, though more recently American Gothic (aka Hide and Seek) showed he’d still got it. The mostly ingenious special effects are all in-camera, apart from some eerie optical work for the manifestation of ectoplasm.

20th Century Fox’s DVD widecreen transfer restores the vibrant colour of some of the sets, particularly the sinful deep reds of the bedrooms. It’s never looked better, and there’s a 4.0 audio track too. It's available in the UK and US. 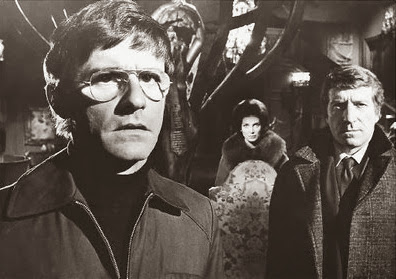 Recently, some of the striking camera compositions were recently plundered and copied for Edgar Wright’s superb pastiche trailer for the Tarantino and Rodriguez’ Grindhouse intermission, for the made-up film Don’t!. A keenly-observed and funny homage. 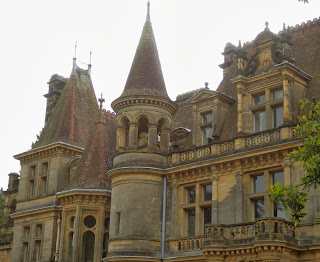 In 2013 - we visited the house used for the exteriors of Hell House - more photos here...