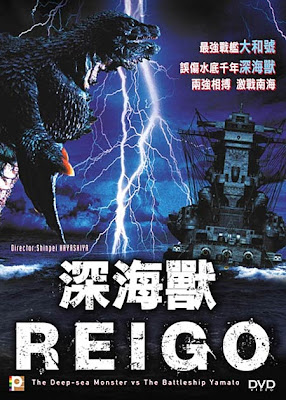 REIGO: THE DEEP SEA MONSTER VS THE BATTLESHIP YAMATO
(2008, Japan, IMDB: Shinkaiju Reigo)
After years of tantalising photos, various reports of screenings and half a dozen title changes, Reigo has finally surfaced on DVD in Hong Kong, released by Panorama (cover art above). Despite the lack of English subtitles, I could wait no longer.

Starved of new Japanese giant monster movies and with the current hibernation of Godzilla, I was looking forward to this, my expectations fuelled by various news sites. Reigo was made by Godzilla/Gamera fan Shinpei Hayashiya. His previous film was Gamera 4: Truth, a short unofficial sequel to the awesome 1990s trilogy. As a fan production, this is extremely impressive. But as a monster movie, it wasn't very satisfying.

The setting is World War II. Japan launches the Yamato, the largest battleship in the world, to lead the Japanese fleet. The mission gets complicated when the Yamato mistakes a huge undersea monster for an enemy destroyer and accidentally kills its offspring. The monster, Reigo, wants revenge and starts attacking the fleet. But if anything can stop it, the Yamato can...

The WW2 setting is deadly serious and quite daring for a giant monster movie, a genre usually reserved for escapism. What lets the film down are the obviously limited budget (small sets and few actors) and the variable special effects. For what should be a visual effects movie, there are very few scenes that work convincingly.

There are obviously some intricate creature costumes and models, but these are only shown in very short cuts. A potentially startling scene, when some man-sized 'bone-fish' leap up onto the deck and attack the crew, was kept very short. Perhaps because the bloody nature of the scene had to be toned down. There's hardly a good look at the bone-fish at all, which looked as interesting a creature design as the main monster.

The wider shots of the creature are mainly done CGI, a very difficult technique when depicting the ocean. The best of the effects shots are very impressive, some saved for the film's climax. The Battleship Yamato is also largely CGI, and rarely looks at all convincing.

I don't want to list all my disappointments in the film. After all it's an ambitious and original project from a fan of the genre. But I strongly advise everyone to treat this as a spectacular fan-made film that actually has a decent cast, rather than expecting a monster movie with a big enough budget.

There are some familiar faces in the cast, Susumu Kurobe (the original Ultraman himself) and Taiyo Sugiara (Ultraman Cosmos himself). Plus the always-welcome Yukijiro Hotaru from the Gamera trilogy, Giant Robo Mikazuki and many other cult movies.

Sci-Fi Japan have a very extensive look at the making of the film, the production history and many publicity shots.

The official Reigo vs Yamato website is in English is here. 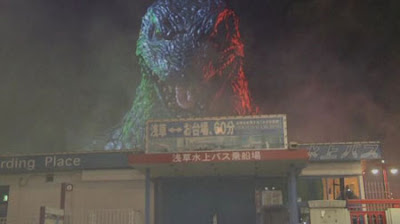 Dread Central has recently broken the news (and a trailer) for a modern-day Reigo sequel from the same director, with the monster walking around on land. It'll be ready by the end of the year, confusingly called Deep Sea Monster Raiga. Again this looks perfect for it's intended audience at giant monster movie festivals, especially since it appears to be aiming for homage/comedy.