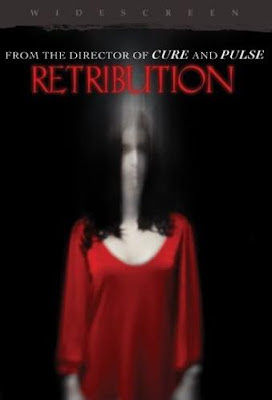 RETRIBUTION
(2006, Japan, SAKEBI)
Kiyoshi Kurosawa is a notable director of J-horror. His unique visions mean I simply have to see his every film! His The Guard from the Underground, Cure, Charisma, Séance and more recently Loft are all genre movies. They sometimes feel like they’re not just about the story, but the successful shocks and scares are never to be forgotten. Kairo (2001) particularly creeped me out, dropped my jaw wide open, then completely confused me with the climax.

Kairo (or Pulse) is a good reference to compare his latest film with. Retribution (Sakebi) also uses mirrors, translucent curtains, stains and shadows, to deceive the eye and tell the story. In it, the background is as important as what’s upfront. 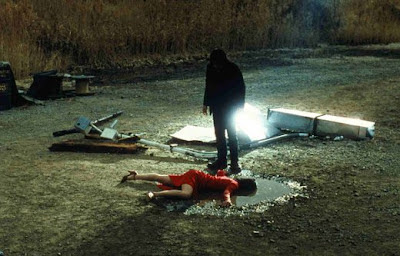 Detective Yoshioki is working on a series of apparently motiveless murders. As the 18th victim is found, forcibly drowned in a puddle of saltwater, the stress of the case seems to be getting to him. There are even clues that implicate him. Worse than that, he thinks the latest victim, a woman in a red coat, is taking revenge by haunting him. Or is he dreaming? As the murders continue, he starts doubting his sanity and his memory...

Watching this, I was reminded of another story of mental deterioration, Roman Polanski’s classic Repulsion (1965), which Sakebi seems to visually quote when ghostly hands emerge from a fractured wall. The metropolitan backdrop of industrial dockside locations provides a theme of city-wide demolition and reconstruction, as well as the precarious reclamation of land from the sea. 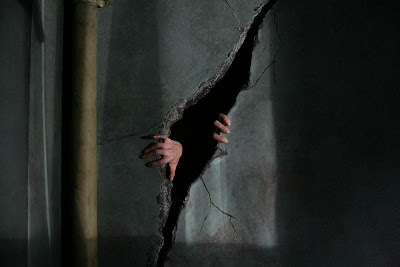 While the visions of the ghost aren't as spine-tinglingly creepy as in Kairo, they are traditionally Japanese. They float along, sometimes with arms outstretched in front – characteristics of the oldest drawings of vengeful spirits. But this sometimes makes her look alternately beautiful, scary or unintentionally comical. She's much more intrusive than the spectres of Kairo, and her red coat reminding me of the child in Don't Look Now (1973, notably set in the waterlogged city of Venice).

Kurosawa is very preoccupied here with reflections, cleverly using mirrors to create very complex scenes. He also challenges the viewer with increasingly intricate possibilities, as each clue shifts suspicion around the suspects, both living and dead. Flashbacks and visions can’t be trusted because they might each have been dreamt or imagined. There's also a growing degree of the surreal as the story unfolds, even the back projection used in the driving scenes gets less and less realistic, as do some of the ghostly antics… 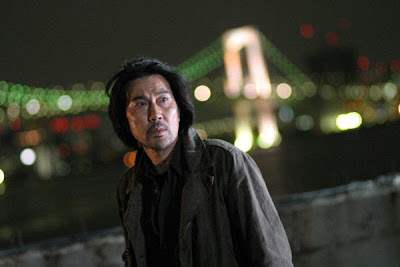 Kurosawa favourite, Koji Yakusho anchors the film as the desperate detective - you might also have seen him in Babel and Memoirs of a Geisha. Joe Odagiri (Mushishi, Shinobi) plays his worried therapist.

Plotwise, I enjoyed this as a complex murder mystery, and a ghost story. Of course I didn't understand everything in it, and like Kairo the ending lost me. But it’s a hypnotic, disorientating, dreamlike and rewarding tale. 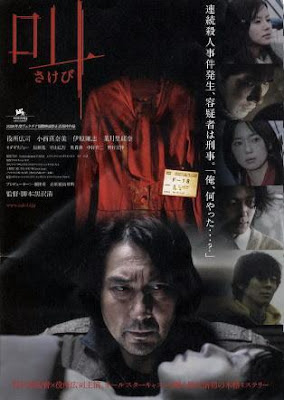 The Hong Kong DVD I watched (from Asia Video) only has stereo audio, and the original 1.85 aspect has been slightly zoomed and cropped to fit 16:9. This is only a small change in the framing, but Kurosawa has carefully composed the whole frame, and the change was very noticeable. Hopefully the upcoming region 1 US DVD release will be better presented.