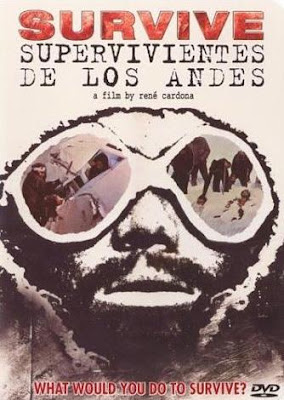 There’s always been an appetite for movies based on real events, especially gruesome ones. It’s now common to see reconstructions of fresh, shocking crimes in TV documentaries, like the Columbine shootings, but it used to be more of a taboo, usually out of respect for the families of the deceased. In the 1970's it was usually exploitation movies that moved in too soon, despite protests. TV movies were only beginning to gain spectacular ratings with dramatisations such as Helter Skelter (1976), that focused on the Charles Manson family killings. But the events in Survive! were too strong for TV.

Other seventies horror movies that tried to gain attention by announcing they were based on truth were The Texas Chainsaw Massacre (1974), The Amityville Horror (1979), and even The Exorcist (1973), though their connection with facts were all found to be extremely tenuous.

Survive! told a story that I knew to be true. I’d read the story in the Sunday supplements and seen colour photographs of the survivors trapped high in the Andes, after a small commercial flight crashed, way off course. When all hope of rescue seemed lost, they faced months of being snowbound, without any food. The only way they could survive was to eat the dead… 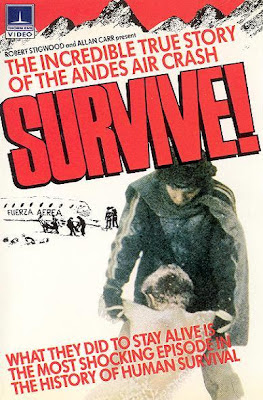 I ventured to the cinema to see what couldn’t be shown in the papers, even though I was too young to see an X certificate at the time (over 18’s only). Before home video, it was much easier to prevent the under-aged from accessing adult movies. It felt like a much bigger deal than it is now.

I saw Survive! at the end of 1976, on an unsuitable double-bill with an Alistair MacLean thriller, Fear is the Key. The posters and publicity were mercilessly playing up the cannibalism angle. Survive! played in my local 'grindhouse' cinema, Studio 7, which always had the dodgiest films and the lowest-budget horrors. I steeled myself – I was new to gore on the big screen…

But what I got was a low-budget Mexican film that had been dubbed into English. Little did I know, Robert Stigwood and Alan Carr had picked this up cheap and marketed it for a wider English-speaking audience, making themselves millions of dollars in the process. Perhaps Survive! helped finance their movie blockbuster Grease? Strangely, Survive! is missing from both Stigwood and Carr’s resumes on IMDB.

Mid-1970’s, this story was a timely gift to cinema – it fitted both the disaster movie and horror genre. Instead of Hollywood having to brave the protests against making a bad taste movie, they simply had to revoice the Mexican film to make a pile of money, one of Paramount Studio’s biggest hits of 1976. Though the news stories had already sold it for them, the marketing didn’t pull its punches. The posters showing the scene of a naked body being pulled through the snow, the trailers freeze-framing on the shot where flesh is cut from a corpse. Tasteful. (…and also on youTube). 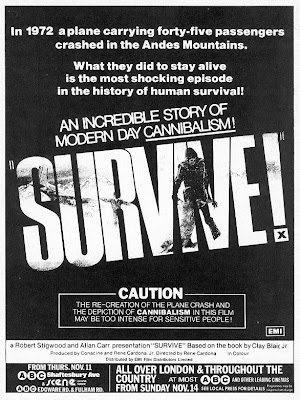 I haven’t seen many Mexican movies, but I’m impressed with Survive! The plane crash is well-mounted for the time, and the snow-bound set looks just about convincing. But because they’re sticking fairly closely to the facts (despite changing the names of all the characters), the camera keeps its distance and you never get to know any of the characters very well. The rescue mission is similarly covered almost like a news story, in a very dry, uninvolving manner. For such an emotional story, there’s only ever real feeling when someone loses a relative.

For most of the time, it's a straightforward telling of real events in an unambitious TV movie style, but things suddenly get gruesome for the initial scenes of cannibalism. Flesh being flayed and a couple of half-eaten corpses are both shock effects more suited to Italian horror. Although the scenes are intact in the UK home video, I certainly didn’t see them like that in the cinema (they were mostly censored out). Seeing these brief scenes for the first time on video, I was shocked at how far they went at the time.

The Mexican version is 26 minutes longer than the English version that played in the UK and US, much more of the attempted rescue mission is shown. It was directed by veteran Rene Cardona, who was 70 at the time! Cardona was no stranger to Santo wrestling movies or Mexican horror, such as the infamous Night of the Bloody Apes.

The English version adds a photographic montage at the start and end, and lays on even more documentary-style voiceover. Obviously all the actors are dubbed, fairly loosely, into English, but this was a standard practice for foreign films in the seventies.

Besides cutting out large chunks of the story and tightening up many scenes, the order of events is changed in the English cut, like the timing of the discovery of the tail-section of the plane. A re-ordering of the facts to suit the flow of the narrative. But the most noticeable change is the addition of almost wall-to-wall music, a score by TV composer Gerald Fried. The Mexican version hardly has any music in it, giving it a more realistic feel, but the English version sounds like a TV movie, with many musical themes sounding far too upbeat. When the rescuers are out looking for the missing plane, they get a jaunty adventure theme, despite the fact that they are about to give up all hope.

Some credit is due though. The moment when the survivors decide to eat their dead colleagues and go out to their frozen graves, has a suitably nightmarish accompaniment, that reminded me of a cue from Jerry Goldsmith’s score for Poltergeist II.

I can’t imagine what the relatives thought of this film coming out so soon after the crash ordeal. The publicity from the news stories must have been upsetting enough. The story never really went away either. Hollywood eventually filmed their own version of the story as Alive (1993), a respectful twenty years after the crash. But despite the bigger budget and location filming, it’s hardly any different from Survive! It's the same story, but this time with English-speaking actors. The film peaks very early with the horrifying plane crash. But the cannibalism is only slightly less exploitative, the bodies in the snow now barely recognisable as human. There’s a bit more action as the survivor's attempt to reach the outside world, to tilt it towards the adventure genre. Alive felt less gritty than Survive! and concentrates more on melodrama, which the young cast barely carries off. 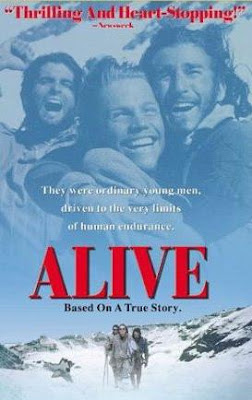 The best way to learn about these events is through a documentary. Both movies end with their rescue, but the story was really only half over - the survivors then had to face the press as the world learned that they had eaten human flesh. Joy at their survival was replaced with angrier reactions, opinions divided by moral and religious concerns.

Only recently have all the survivors felt comfortable talking about their ordeal in front of cameras, and they even revisit the crash site in a new feature-length documentary, Stranded! The Andes Plane Crash Survivors (2007), also called Stranded: I Have Come from a Plane That Crashed on the Mountains. Besides recalling their experiences, a camera found in the wreckage documented some of their story. Then the final moment when they were rescued was of course filmed by a news crew - a wonderful moment to see.

Watching the new documentary, hearing what they were thinking at the time is a completely different experience to seeing recreations of what they were driven to do. The various versions of this story through the years demonstrate how perceptions change.

Of course, if you still want to see it, there are only two ways to see the original Survive! at the moment. The Mexican version is on DVD as Survive: Supervivientes de los Andes and runs at 111 mins - there's a Mexican trailer included, and good English subtitles. (Available here from CD Universe.)

The shorter English version is rarer, on a long out-of-print VHS. But they still sell for low prices on eBay. Strangely the VHS (released by Thorn-EMI) was from a far better-looking print than the current DVD. The colours are more vibrant and the grading brighter. The VHS runs just under 82 minutes and is uncensored. The end credits cheekily list everyone who helped redub the film, but only mentions six members of the original cast!