I recently rewatched Mishima: A Life in Four Chapters, and thought I should see the famous writer in one of his acting roles. Though he’s only in Black Lizard for a brief cameo, there's plenty else to enjoy.

The atmosphere is very ‘Mishima’ throughout, with it’s overly poetic dialogue and death/beauty obsessed characters. The script is based on his stage adaption of an Edgar Rampo novel. Rampo was a potent source for cinema adaption, and his work is still of high interest. The 1968 film of his Horror of Malformed Men has finally been released on DVD this year in the US, as has Blind Beast vs Dwarf and Rampo Noir. One of Shinya Tsukamoto's best films, Gemini (1999) is also from a Rampo novel. The story of Black Lizard features his regular hero, Detective Akechi, one of Japan’s favourite sleuths (who was pitted against his fictional rival Kindaichi in a recent Japanese TV movie). Kogoro Akechi is more of a Humphrey Bogart private dick, unafraid to slum it in the sleazier corners of the big city.

Master Detective Akechi’s chief adversary is the bloodthirsty Black Lizard, a woman who’ll do anything to get what she wants. The twist is, the character is expertly played by a female impersonator. The opening titles hint at the unusual, by using illustrations by Aubrey Beardsley, which also decorate the Black Lizard’s nightclub (psychedelically lit like a sixties Batman episode). But while Beardsley represents debauchery and adventurous sexuality, the cross-dressing actor is still meant to be playing a woman, and not a character in drag.

This makes most of the film extraordinary, with Akihiro Maruyama delivering an excellent though exaggerated performance as a power-crazed woman. While it’s definitely camp, it’s restrained enough to also qualify as realism. The illusion seems to have been enhanced by using an actress to ‘loop’ the actors dialogue.

The Black Lizard’s crime capers are more James Bond than profit-orientated. If she wants something, she goes after it using kidnap, faked suicides and brute force, in outlandish schemes reminiscent of Danger: Diabolik (released in Italy the same year). The action is very pulpy, with plot holes everywhere, but the melodrama and the style is more important. Black Lizard designs elaborate schemes to foil Detective Akechi, who she also loves. But to escape with her heist, she really should kill him... 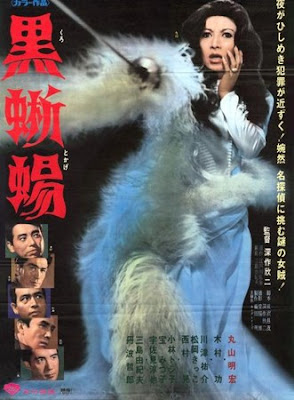 The director is the prolific Kinji Fukasaku, who many of us first encountered on his last ever film – Battle Royale. But back in the sixties, he was already courting controversy, though I don't know whether this film was designed to spoof the earlier 1962 movie adaption of the same novel.

The lush 2.35 widescreen camerawork is fluid but expertly executed, with a precise and jazzy use of the zoom lens. The unique cast and colour palette all combine to create a visual style that all the money in Fort Knox couldn't possibly recreate now.

With the talent involved here, it’s a shame this isn’t on DVD. Perhaps there are rights issues with the Mishima estate? If this ever becomes available, it can still easily be enjoyed today.

The C I N E B E A T S flickr site has a trove of screengrabs to whet your appetites.


UPDATE: October 2007
Cinebeats later published an informative and fully illustrated backstory to the film - though my browser has a slight problem loading her page properly. 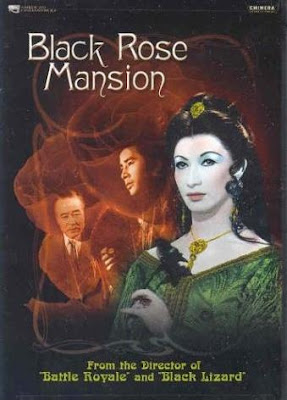 One compensation is that Fukusaku's 1969 follow-up to Black Lizard, called Black Rose Mansion, is available on DVD in the US. I think Tartan were about to bring this out in the UK when the company folded. With a smaller, almost house-bound story, most of the action takes place inside a gentlemen's club. But when the house entertainer is played by the unique Akihiro Maruyama, it's still a hypnotic and entertaining melodrama.

Black Rose Mansion was on release singly and in a Fukusaku triple-bill with two more freewheeling sixties movies Blackmail Is My Life and If You Were Young: Rage. More details here on DVD Times.

Email ThisBlogThis!Share to TwitterShare to FacebookShare to Pinterest
Labels: 1960s, Japan, NOT ON DVD