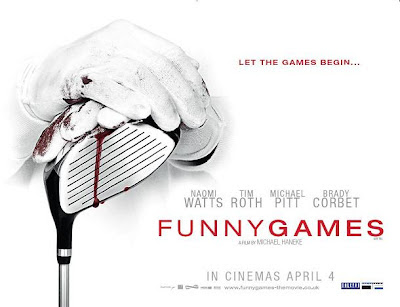 Movie audiences get a battering

As the onscreen title (Funny Games U.S.) pointedly reminds us, it's a remake. Of the 1997 Austrian film Funny Games. And it’s by the same director. After the success of Hidden (Cache), Michael Haneke has seized the opportunity to bring the experience of Funny Games to the originally intended audience, the American public. 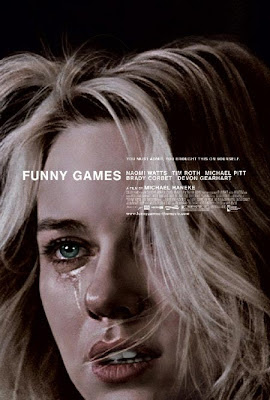 Two overly polite young psychos use the flimsiest of excuses to wreak a prolonged and savage attack on a nice middle-class family, who are on vacation in a remote beauty spot by a boating lake. We’re initially presented with a couple and their young son. They have an expensive car, their own boat, two sets of golf clubs, and a rather dull taste in opera CDs. The two cheeky psychotics on the other hand enjoy speed metal music. They are more likely to represent a typical movie audience - anti-establishment anti-heroes looking for new thrills. What they’re interested in is violence, and almost unthinkingly, vicious psychological torture. 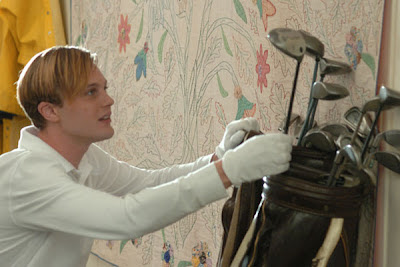 But this convincingly portrayed story is a stealthy set-up. A trap for fans of screen violence and mayhem. It’s from the genre of violent films that are about violence, a traditionally tricky genre that can easily backfire. Witness the double-edged reaction to Kubrick’s A Clockwork Orange or Oliver Stone’s Naural Born Killers. Funny Games U.S. avoids the usual pitfalls and succeeds at making the audience react realistically to violent situations, without exploiting them. Turning death and torture around from being entertainment, back to being repellent.

When violence happens it’s painful and prolonged, accompanied by screams of agony and the tortured reactions of loved ones. The effect is intensified by the reality of the situation – there’s no background music, and the camera often holds a fixed gaze on the situation as we see it play out without cutaways, as it would for real. If pain and death are going to be used to sell tickets, let’s be reminded of what it’s actually like. 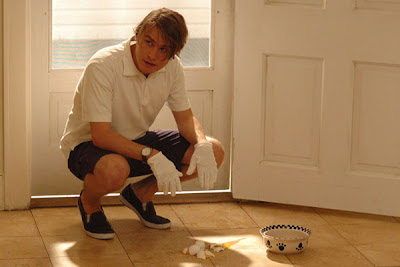 A few years ago, I didn't ‘get’ the first Funny Games. I tried watching it, but didn’t get emotionally involved with the characters. With this new version, in a cinema, with a cast I like, I got it. This time it was an experience. I was in a constant state of dread about what was going to happen next. The violence hurt. The screaming was unbearable.

This isn’t to say that every technique the director used was successful. I didn’t understand the film’s most blatant communications with the audience, but I’m intrigued enough to see more of Haneke’s films and what he’s about.

The two wild jokers in the story taunt the audience that they are giving us what we want. We’re teased with some facetious details about why they’re like this, but it’s irrelevant. The audience are more interested in the action than the motive. The bloody infantile games they play are why we’re watching.

The hoodlums echo the amoral duos from Rope and Compulsion, both based on real-life murder cases. They’re played by former teen heart-throbs Michael Pitt (Dawson's Creek, The Dreamers) and Brady Corbet (Mysterious Skin, Thirteen) who aren’t totally successful in portraying the ‘wily and dim’ double act of the original. But Naomi Watts (Mulholland Drive, The Ring and Tim Roth (ironically from Reservoir Dogs and Pulp Fiction) are intensely good in gruelling roles. 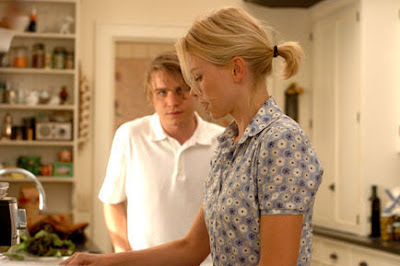 I’ve not seen many interviews with the director, or figured out his precise views. But he’s obviously very keen that this story reaches a wide audience that thrives on movie violence for entertainment. Rather than pick on the omnipresent serial killer genre or slasher films, he’s used the ‘home invasion’ scenario. This has previously been used to supposedly analyse violence in society, while crassly exploiting it – like in Straw Dogs and Death Wish - though these films are now obscure targets.

Without referencing a specific genre, Funny Games ably rallies against the exploitation of pain, with a typical nightmare premise filmed in a very different way, questioning how we watch atrocities that have been presented as entertainment.

Funny Games U.S. is constructed to lure all of us naughty horror fans in and try and teach us a valuable lesson. Though a mainstream audience may not get the point.

It's on release in

the USA mid-March and in the UK from April 4th.
The official UK website is here...