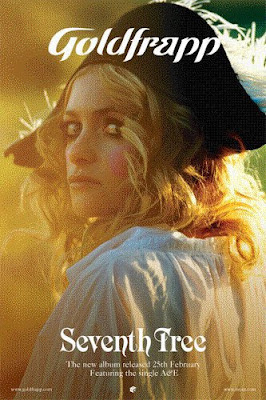 I don't talk about music much here, because the chances we all like the same movies and all like the same music are pretty slim. But when one of your favourite bands release a new album when you're having a shit week, I feel that some sort of thanks are in order.

Goldfrapp have released a new album. It takes a different direction from their previous Supernature by being gentler but still delicious. They seem to have returned, almost but not quite, to Felt Mountain territory. In one track, Alison's vocals stray up into the ether, where only The Cocteau Twins used to dwell.

The promo video for the first single A&E shows how the band are determined not to repeat themselves or follow any trends. It's also still good to see a video when you think "how did they do that?". There's also a short film included in the special edition release of the album and one of the A&E single releases, that talks about the new album while showing us footage from their new animal-oriented photoshoots, intercut with random super-8 gorgeousness.
More about Goldfrapp here and here...

(But please release a compilation of all your promo videos on DVD. And a DVD of your Supernature concert. I know you recorded it on HD, I was in the audience that night...)

Email ThisBlogThis!Share to TwitterShare to FacebookShare to Pinterest
Labels: music