GHOST STORY
(1974, UK, aka Madhouse Mansion)
A bizarre British chiller, from the director of I, Monster

News Update, November 2009
- a marvellous 2-disc Special Edition of Ghost Story has been released in the UK

Please note: all the following screengrabs are from an old VHS, NOT the new DVD!!!

One of several films with this name, this may strike a chord with those who caught it on late-night TV in the UK in the early 1980s. The cast is unique and there’s enough atmosphere emanating from the quirky music and parallel plotting to make this noteworthy. I keep revisiting it, mainly for Ron Geesin’s soundtrack. Stephen Weeks earlier directed the Peter Cushing/Christopher Lee version of Dr Jekyll and Mr Hyde, I, Monster, for Amicus Films, partly filmed in an experimental 3-D process.

As Ghost Story begins, the period setting is hard to place, further unsettling viewers trying to gain their bearings. It opens with a young man, travelling on the London Underground, but everyone is in turn of the century outfits. This takes advantage of the fact that the oldest branches of ‘The Tube’ are over 140 years old. The man is met at a station and driven deep into the countryside. The rather dapper MacFayden has invited two school friends, Talbot and Duller, to a huge country mansion on the pretence of a shooting weekend. But when Talbot gets spooked by a Victorian doll in his room and starts to dream of dirty deeds at a local derelict asylum, he realises that his school chums haven't told him everything, as his dreams keep getting more and more real... The scenes on the Underground were of course shot in London, or rather under it. But the mansion and asylum are supposed to be in the middle of the British countryside, except that there is exceptionally bright sunshine. I’d always assumed that this was because it was shot in Australia, though the architecture and gardens looked too grand. Only an article about the director’s films published in 2000, in Video Watchdog issue 59, revealed that Ghost Story was mostly shot in India, doubling for rural Southern England! The British cast further conceals this audacious deceit. In the 'present' scenes are Ken Russell favourite Murray Melvin (The Boyfriend, The Devils) and a snide Vivian MacKerrell (pictured here) who was the original inspiration for the character Withnail of Bruce Robinson’s legendary Withnail and I, see more here. In the flashback/dreams are singer and occasional actress Marianne Faithfull (Girl on a Motorbike), sitcom queen Penelope Keith, typecast bounder Leigh Lawson, and one of Hammer Film’s shining stars Barbara Shelley (Quatermass and the Pit, Dracula - Prince of Darkness and Village of the Damned) in her last horror role to date. Their ‘past’ scenes in Borden's asylum are far more tense than the three friends rattling around in an old dark house. The madhouse, and the way the inmates are treated, feels all too real. But when the tables are turned, the lunatics really do take over the asylum. The film is slightly let down by the basic lighting and camerawork, and some clumsy comedy at the expense of sensitive twit, Talbot (Larry Dann). But the slack opening builds slowly and steadily as the parallel stories develop, and it’s cleverly unclear as to where reality starts and second-sight begins. This a real curio, worth wider exposure, and only hitherto available on an eighties NTSC VHS, released in the US under the unsubtle title of Madhouse Mansion. (November 2009, the film finally got a DVD release in the UK, with a whole second disc of extras). 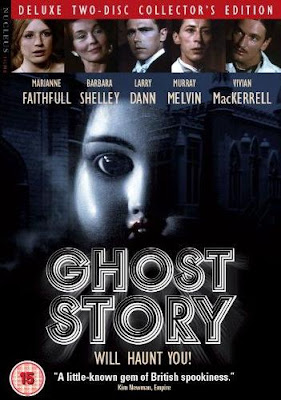