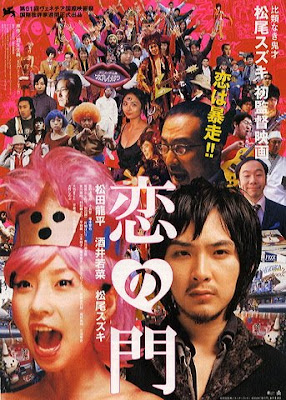 OTAKUS IN LOVE
(2004, Japan, Koi no mon)
First faltering romance for a pair of anime/manga/cosplay geeks

I'm not big on romantic comedies, but here's one devoid of cliches. It's in the world of anime geeks (or otaku), where fictional characters and their inventors attract an obsessive fandom of Star Trekian proportions. But while anime and manga are widely seen to be all giant robots and schoolgirls, in Japan they're about absolutely anything (tennis, cats, cooking) with just as many female fans.

Koino (Wakana Sakai) loves singing along with anime theme tunes, collecting manga, and dressing up as her favourite characters. Mon (Ryuhei Matsuda) is an aspiring manga artist with a radical take on the artform. The two meet by accident. Well. In an accident. Both twenty-something, lonely virgins, with something in common. A love of manga. She's particularly impressed that he's a manga artist. That is, until she sees his work...

The scenario is set for a bizarre courtship involving cosplay dating, ani-singers, and manga conventions... Mon stumbles into a manga bar and even the owner, Marimoda, gets tangled up in the budding relationship... The embarrassments of early sexual connections pale into comparison with their respective obsessions. 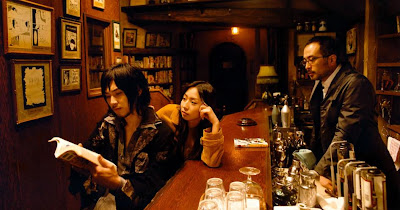 This is the first film directed by Suzuki Matsuo, an experienced actor who also stars as the deadpan bar manager. He's adept at handling this quickfire comedy with a sharp sense of visuals. Matsuo has also rallied an extensive set of cameos. Among the real-life manga artists and anime singers, there are also movie directors. I didn't get all the in-jokes (though the humour doesn't rely heavily on them), but I wasn't expecting to see Shinya Tsukamoto (Tetsuo, Nightmare Detective) and Takashi Miike in all the chaos.

Acclaimed, cult actor Ryuhei Matsuda (the star of Nightmare Detective 1 and 2, and Gohatto) proves adept at deadpan comedy. He's also unafraid to flash his leopardskin bulge, though this is still very tame for a sex comedy. The less well-known Wakana Sakai proves to be his match for comic timing as well as drama.

I'd assumed that, by now, Otakus in Love would have been released on DVD in the UK or US, but no. With the widespread cosplay and anime conventions, I thought that this film could be an easy sell. 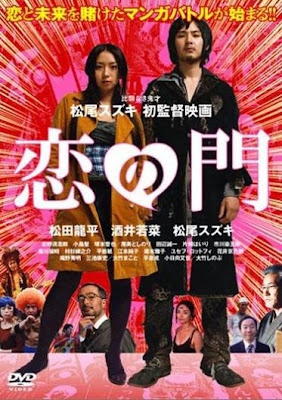 Luckily, the Japanese DVD was subtitled in English, under the title Koi no Mon. There's also a Korean special edition which has good subtitles and even subtitled extras on a second disc. Both editions are out of print, but they're out there, somewhere.


The official website for the film is still here.

For a flavour of the visual style, here's an unsubtitled trailer on YouTube...