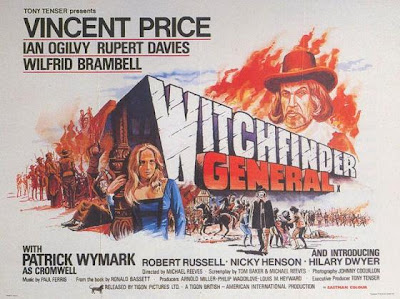 
How do you know she's a witch?

Finally, I can say I've seen a good presentation of one of Britain's best horror films. I'm going to talk longer than usual about its DVD releases, because it's a highly regarded film in British cinema, as well as horror history, and there are a few ‘restorations’ out there... I'm late to this particular party, these DVDs have all been out for ages, but I've only recently watched the film again and cross-compared. 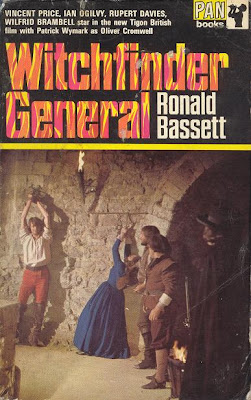 Based on a factual but rather dry historical account of the real-life Witchfinder General, written by Ronald Bassett, director Michael Reeves’ film aims for realism in both period detail and the depiction of violence. Because it stars Vincent Price, it’s therefore classified as a horror film. But only as much as Apocalypse Now or The Deer Hunter are horror films. They show the horror of war and torture, and are based on real events. Witchfinder General could only really be classified as horror if it hadn’t happened. 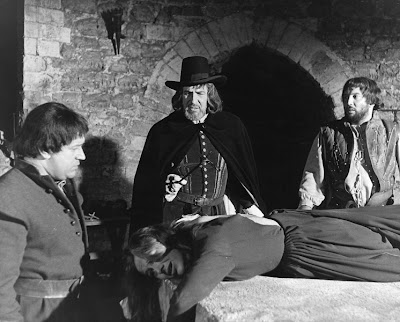 The Civil War in 17th century Britain, when Oliver Cromwell’s Roundheads were fighting King Charles’ armies across the country. Amidst the chaos of warfare, Matthew Hopkins, a legally-appointed witchfinder was entrusted to root out, torture and execute anyone suspected of practising witchcraft. Just after a young soldier in Cromwell’s army gets engaged, his fiance and her father cross paths with the witchfinder and his thuggish assistant, Stearne. Can the soldier tackle Hopkins and win? Can he avoid being hung for desertion from the army, as well as outwitting the deceitful and ruthless official?

Ian Ogilvy (star of The Sorcerers and Return of the Saint) plays the driven young soldier - his best ever performance. Vincent Price also won great reviews for underplaying as Hopkins - whereas his usual horror roles were lightened by his humour and theatricality (like in The Abominable Dr Phibes and The Pit and the Pendulum to name but two). Here he's a ruthless and grim character, deliberately ignoring the suffering he inflicts for personal monetary gain. Hilary Dwyer (Cry of the Banshee, The Oblong Box) plays the fiance Sarah, also underplaying as a likeable and realistic character.

It benefits from being shot almost totally on location. The English countryside helps us to imagine what it was like over 300 years ago. Some of the Norfolk and Suffolk locations that were used had actually been visited by the real Hopkins. The village square in the burning scene isn't a set - some of the buildings would have been around when Hopkins was there. It couldn’t look any more authentic.

In the book, the torture scenes require imagination. But the pain is fully described in the film, made even worse by the twisted injustice of the rules. Once accused, the ‘witches’ have no chance of survival, whether they co-operate or not. 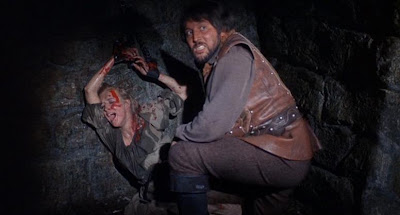 The film was heavily cut on its original release, but not because of explicit special effects – there’s no prosthetics, rubber limbs or even spurting blood. The violence was far more effectively portrayed than usual, by using a realistic amount of stage blood, true to life performances and a lot of screaming. The loud and extended use of screams make it uncomfortably real and all the more horrifying. Besides the censor cuts to reduce the amount blood, there were cuts to reduce the amount of screaming.

After decades of watching this on TV, when it was always a cut version, the VHS debut in the UK turned out to be less cut, but with alternate scenes of nudity from the Continental version. This wasn’t the version I wanted. In the US, the film had been re-edited and re-titled as The Conqueror Worm for the cinema release, to fool audiences that this was another of Vincent Price’s Edgar Allen Poe films (the series of adaptions directed in the UK and US by Roger Corman). But worse still was the US VHS release, with Paul Ferris’ haunting orchestral score replaced with electronic music. 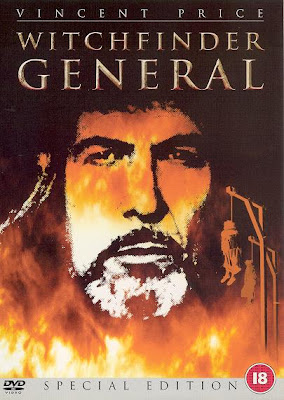 Subsequently, each time I saw Witchfinder General, there was a little bit more to see. With a string of TV restorations, and finally an 'uncut' widescreen UK DVD release in 2001, from Metrodome. But this debut on DVD was compromised by having the restored violence sourced from a low-quality VHS. Every restored cut was also incorrectly aspected (4:3 vertically squeezed) and sometimes intercut with film elements midshot. Even so, this rough restoration has played on TV. While the new shots were a revelation to see, the presentation was regularly jarring. DVD Beaver, the best site for DVD comparisons has as yet only reviewed this version, though it has some useful screengrabs. 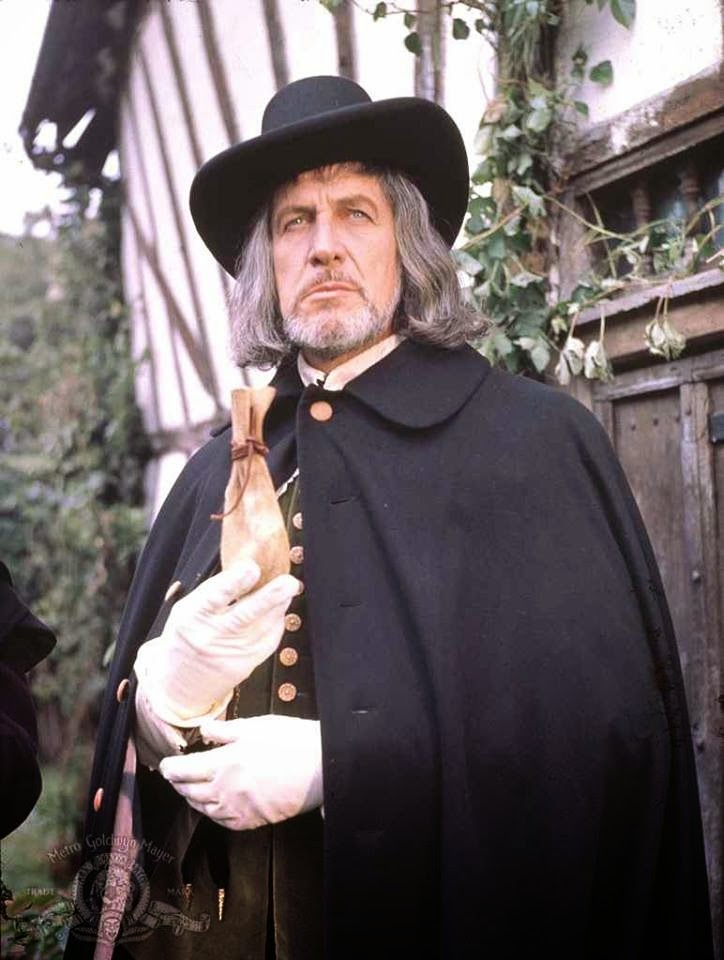 Metrodome gained bonus points for the DVD extras, including an in-depth documentary with some of the original film-makers. It also has a ‘branching’ option to see the Continental version – using alternate takes of topless bar wenches, originally shot for Europe's less prudish audiences. There is thankfully the choice to see it with the clothed scenes intact. But both versions on the DVD include the low-grade VHS censor cuts. 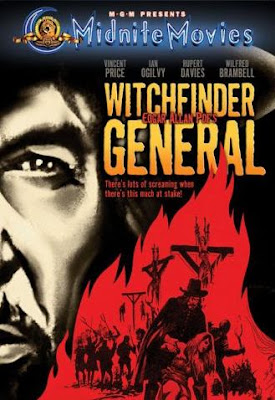 Finally there are now two more DVDs to choose from. The 2007 MGM 'Midnite Movies' release in the US, which Tim Lucas recommends here, and the same restoration on a 2005 French DVD that I’ve only just seen. The two DVDs run at slightly different speeds, as is usual with PAL and NTSC transfers, but appear to be exactly the same version. 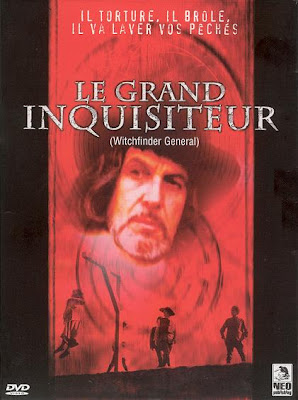 Based on a French online film-forum comparison, I bought the French DVD release from Neo Publishing, titled Le Grand Inquisiteur. The onscreen titles and credits are all in English, and the French subtitles can be turned off. I’ve compared it side-by-side to the UK Metrodome release, and the French DVD beats the look of the UK DVD in almost all departments. The restored cuts blend perfectly with the rest of the film, and even add a couple of powerful moments not previously seen. Two scenes run a little longer - the end of Stearne's dungeon interrogation scene runs an extra two slaps and screams, and the climax runs for two extra whacks of the axe. Both scenes now feel like they run to a natural conclusion.

The print, or maybe the film-to-tape transfer, used for the French DVD also improves the crushed, darkened look, where many filmed details were lost in the shadows. Conversely, some day-for-night shots that were too light, that even had blue skies in supposedly night scenes, have been corrected. With more detail on display, and flawless restored footage, this is now a treat to watch. 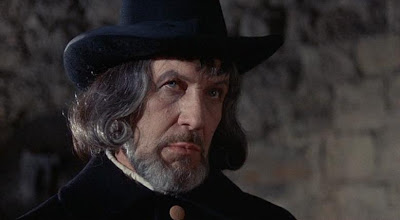 While the French DVD is by far the best version I've ever seen, I still have a couple of notes. It starts with a slightly yellow bias to the colours, skewing the lush green of the grass, as seen in the UK transfer. The DVD also seems to suffer poor compression at the start, with subtle but visible patterning in the skies of the opening scenes. Both these faults disappear after the first five minutes of the film. It has all the restored footage of the UK DVD, except the first pricking shot for some reason.

The MGM release also marks the home video debut of the original soundtrack in the US. Tim Lucas notes the loss of the 'Conqueror Worm' version opening and closing footage, which I’ve still not seen. This indicates possible material to be included in a future special edition. The MGM DVD has the documentaries but adds a unique commentary track, from the star Ian Ogilvy and producer Philip Waddilove. 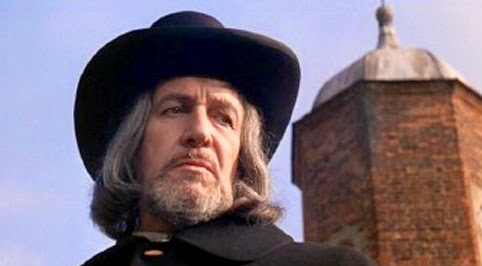 This article was inspired by this French page that demonstrated the advantages of the French presentation over the UK. I couldn't have found out about it without the fellow obsessives on the MonsterKid Classic Horror Forums. The French article has very useful comparison framegrabs of the UK and French DVD releases.

There's also a interesting interview about the MGM restoration here at DVD Talk. 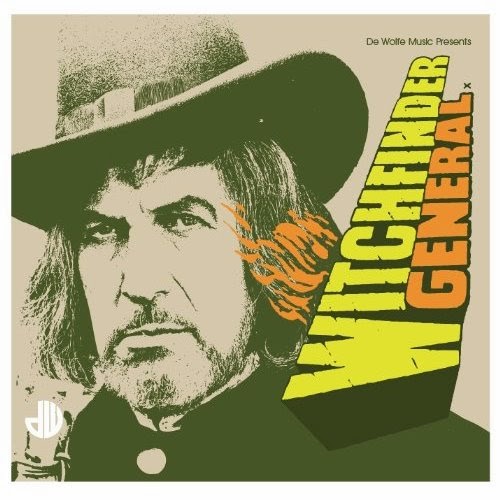