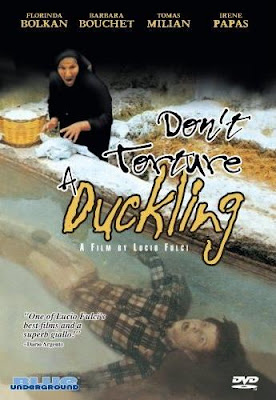 DON'T TORTURE A DUCKLING
(1972, Italy, Non si sevizia un paperino)
After watching Mike Baronas' Paura DVD tribute to Lucio Fulci, I was hungry for some of Fulci's films that I hadn't yet seen. I'm very glad I started with this one.

With the customary oblique title, I'd assumed that this was a typical Italian slasher, with half-naked models being terrorised and creatively knocked off. I was surprised when Don't Torture a Duckling turned out to be as good as the early Dario Argento thrillers, with a unique setting and an uncomfortably edgy plot that's still topical and challenging today.

In a remote hilltop town in southern Italy, seemingly ignored and bypassed by a new motorway, a series of child-murders turns the local people into a lynch mob. The victims are all young boys. The police have plenty of suspects, but little evidence, and so the killings continue...

The ancient hilltop sun-bleached town is a great-looking location. Carefully but dynamically photographed, Fulci tells his story with long, precise shots, using the zoom lens like a highly-trained sniper. 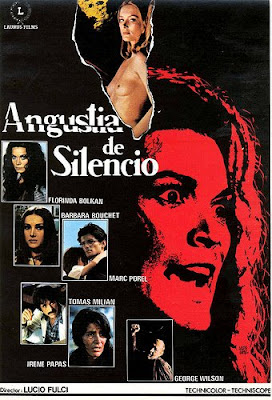 Barbara Bouchet is the only face in the cast I recognised - this beautiful actress gets a far better part here, than when she played Miss Moneypenny in the James Bond comedy, Casino Royale (1967). Here she appears unnervingly confident during an extended nude scene with a young co-star. In fact the whole cast work admirably well in a variety of intense scenes, even the child actors, who Fulci has no problem getting performances from.

While this is essentially more a murder mystery than Fulci's later supernatural horrors, a couple of startlingly vicious scenes pushes it firmly into horror territory, topped off with a voodoo doll motif. A prolonged and nasty chain-thrashing pre-dates the opening scene of Fulci's The Beyond (which is newly released on DVD).

The child murders are comparitively restrained, but obviously shocking. The thankfully unrealistic use of dummies lessens a couple of nasty moments, but elsewhere, the make-up effects look painfully real.

Fulci appears to be attacking small town mentality, the police and the church, but his messages aren't heavy-handed or intrusive, just playfully subversive if you dig into the subtext!

Altogether, this is a unique story, in an unusual setting, with some inventive surprises for the genre, all beautifully shot and slickly told. My only reservation could be that the dialogue is dubbed into English (when most of the cast are Italian). But in the 70s, dubbing was widespread and far more skilfully done than it is today. It's also typical for the period.

This recent DVD release from Blue Underground appears uncut, and is presented in a beautiful 2.35 widescreen transfer. What are you waiting for? Yeah, I know it isn't very seasonal.

Do you want to know more?
More about Lucio Fulci films here...