MURDERS IN THE ZOO (1933): pre-code horror finally on DVD 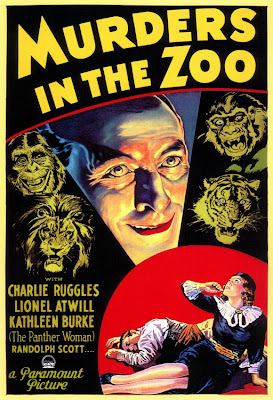 I don't write as often as I should about vintage horror. Even though I regularly watch and enjoy many of them, they're harder to recommend to a potential new audience, without explaining and excusing the history of movie production, acting techniques and, er, history. But I'm delighted when any good horror film finally becomes available again, after too long an absence - this has only just been released DVD. It's one of my favourites and can even be enjoyed by today's horror standards.

'Pre-code' was a period of American cinema where horror movies, dramas and thrillers were pushing the boundaries of what was acceptable in an entertainment that was unregulated and open to all ages. In 1935 the Hayes Code clamped down on what could and could not be shown in movies, an overly restrictive and puritanical wad of rules that even dictated the movies endings. The code wasn't successfully challenged until the 1950's.

The UK had had a hugely negative influence on horror films in the mid 1930s. The British market was a major source of income for Hollywood, but was attempting to ban and boycott sadistic horror films. A major reason why subsequent horror films were more humorous, more supernatural and more watered-down for many years.

Pre-code movies are cherished as being from a brief period of early sound films that dealt with tough subjects, demonstrating that drugs, sex and violence are certainly nothing new in entertainment. Without them there's a false impression that everything loosened up in the 1960s, not the 1920s and '30s. 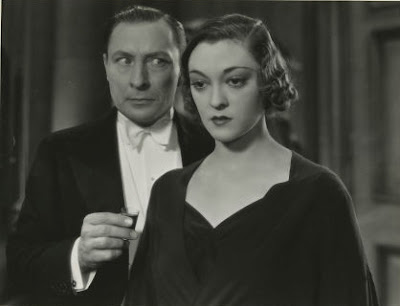 Murders in the Zoo starts with a startling scene where Atwill is dealing with an amorous admirer who's been seeing his wife. He ensures that it will never happen again, and that the unlucky fellow never gets a chance to brag about it either... Collecting wild animals for the zoo, he's about to return from the forests of Southeast Asia, where the laws of the jungle are on his side.

Back in the USA, his wife (Kathleen Burke) continues to lead him into trouble, meaning that he'll have to commit a string of perfect murders where the animals take the blame... With lions, tigers, crocodiles and poisonous snakes around, how hard could it be?

I was delighted to see this on late night TV in the mid-1980s with a group of friends. While we'd been expecting a fifty-year old, polite, palatable, creaky old horror film, we were surprised at its brutality. The cold-blooded and surprising murders are capped with the use of actual dangerous animals. One scene couldn't be done today, when the cheetahs, lions and tigers all start fighting with each other - no way of faking that! What also adds to the film are the leading actors interacting with the animals, not always using stand-ins. The story still holds up today with it's clever 'perfect murder' method... 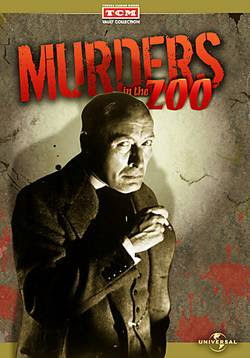 The villainous Lionel Atwill isn't as well known as Bela Lugosi or Boris Karloff, but starred in many horror films of the period and is still much loved by fans of vintage horror. His talent lay in playing professionals with an alternate sinister side, though he played a goodie in his first horror movie Doctor X. He made two more horror films with Fay Wray (the star of the original King Kong), but as the villain - in The Vampire Bat and Mystery of the Wax Museum. The last of which was later remade in 3D and in colour with Vincent Price recreating Atwill's role, House of Wax (1953).

After Mark of the Vampire (the remake of Lon Chaney's lost London After Midnight), Atwill joined the Universal Studios 'team-up' horror sequels, where the paths of Dracula, the Wolfman, Dr Frankenstein and his creature kept on crossing. Starting with Son of Frankenstein (1939), in which he created an indelible characterisation of Inspector Krogh, the one-armed policeman who'd fought the creature and lost. Kenneth Mars spoofed him and his wooden arm brilliantly in Mel Brooks' Young Frankenstein (1974).

It's good to see Randolph Scott in a suit for a change. Most of his long career was played out in westerns, even getting a namecheck in Mel Brooks' Blazing Saddles (1974). It takes a little getting used to, seeing him in a horror film - like getting John Wayne in Psycho. Though Scott did star in a another big fantasy film, as the love interest for She (1935). Here he plays a veterinary scientist, meaning he has to wrangle some pretty large snakes - very impressive, Randolph.

Playing Atwill's wife, Kathleen Burke is instantly recognisable for her huge eyes. She'd debuted as the 'Panther Woman' in another Pre-Code classic The Island of Lost Souls the year before, another influential horror that's still without a DVD release.

But top of the bill is Charles 'Charlie' Ruggles, a comedy actor whose long career endured on into the 1960s, appearing in many classic TV series (Bewitched, The Munsters, The Man From UNCLE) and Disney films (The Parent Trap, Son of Flubber). While he doesn't get too much in the way, his not-very-funny business is at odds with the rest of the film, and is probably the reason that this horror isn't as highly regarded. But without him, the film would be well under an hour! 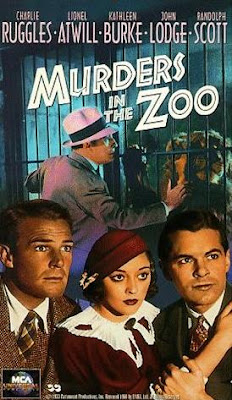 Murders in the Zoo was missing from home video since the US release on VHS in the 90s. Only last month was it remastered and released on DVD from the TCM Vault in association with Universal Studios, in a similar service to the recent Warner Brothers Archives releases, where a limited number of DVDs are manufactured, just to see what the demand is. More news on these titles here. I'd be disappointed if this new approach isn't successful, and that there are only a handful of people left in the world who want to see these films - a scary prospect that too few people are interested in vintage horror.


There's another opinion of Murders in the Zoo at 1000 Mis-spent Hours and an amusing scientific analysis from And You Call Yourself A Scientist.

Here's a quick starter guide and a list of Hollywood's daring Pre-Code movies over on DVD Beaver.