THE DAY OF THE TRIFFIDS (1962) - an influential British apocalypse 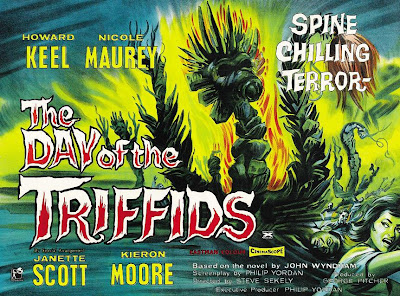 An appreciation of this Technicolour nightmare

A classic British sci-fi horror film, based on John Wyndham's influential novel, starts with his hero waking up in an eye hospital to discover London in chaos, having to figure out an adequate post-apocalyptic survival strategy, while fending off an army of killer plants. The global scenario of doom has been repeated in dozens of projects since, not least in 28 Days Later which starts off much the same, in the same city too. But the original threat wasn't fast-moving zombies, but large walking plants...

Bill Masen misses out on seeing a spectacular meteor shower that blinds most of the world's population, leaving them at the mercy of the mysterious triffids (hinted at also being extraterrestrial in the film, but not the book). These plants can uproot themselves and kill with a whiplike stinger. Bill meets another sighted survivor and leaves the chaos of the city and England behind, heading south in search of refuge from the growing threat... 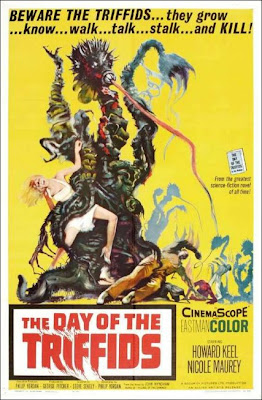 The scenes of a devastated city were particularly shocking to this young Londoner when I first saw them. Though the special effects are variably successful through today's eyes, they were convincing for many years. London in flames, the carnage from train and plane crashes and the ensuing panic is still unpleasantly real. Added to this are the creepy sounds of the triffids, lurking in shadows and fog to strike down and feed on human victims. While slow-moving, they provide a similar suspenseful threat as oldschool zombies. They're rarely seen in strong light or extended close-ups and it's hard to get a clear idea on their exact biological shape. Their scariest feature is what passes for a head, and a nightmarish face. The early scene during the meteor shower, in a huge shadowy greenhouse in Kew Gardens, masterfully uses vivid primary technicolor for atmosphere and shock effect. 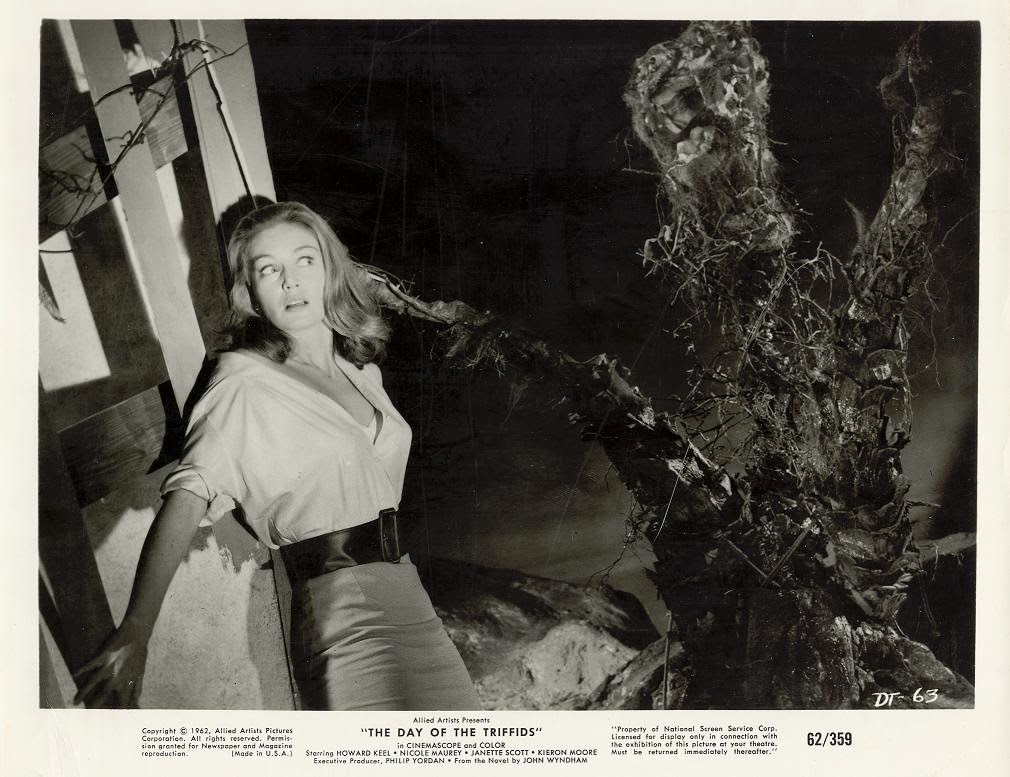 Famously, after initial filming had finished, the feature's duration was still short of usable material, and director Freddie Francis was drafted in to add the memorable lighthouse scenes, without getting a credit. These new scenes, interspersed throughout the story, added co-stars Kieron Moore and Janette Scott (also seen together in Crack In The World), a larger horrific triffid, and a stirring new climax. The best publicity stills ended up being taken in these lighthouse sets too, Janette being menaced by a triffid in the shadows. 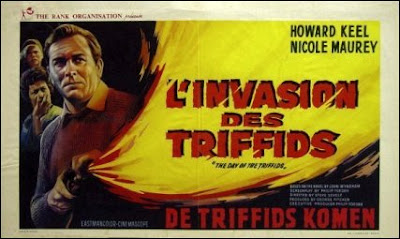 Howard Keel, as Bill Masen, is convincing and steady as a rock in the centre of all the havoc, halfway in his career between Hollywood musicals and endless TV episodes of Dallas. Mervyn Johns has a short role as Coker - the actor was a long-standing torch-bearer for classic British horror, having appeared in the ghost anthology Dead of Night (1945). It's a memorable role, showing a deft touch for sympathetic and believable characters. Yet Johns could also portray madness to an astounding depth, playing the witty serial killer in My Learned Friend, and part of the eccentric family in William Castle's The Old Dark House (1963), which is newly available in a William Castle Collection DVD Boxset. 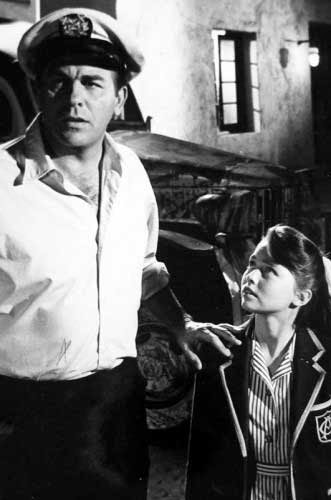 Janina Faye, playing a cheeky schoolgirl sidekick, was fresh from a string of child parts in British horror films, most touchingly Horror of Dracula, when she's wrapped up like a teddy bear by Peter Cushing as Van Helsing. She'd also been in The Two Faces of Dr Jekyll and Never Take Sweets From A Stranger (a daring Hammer Films paedo-thriller, hopefully on DVD in the US soon), and The Hands of Orlac remake. She later had a more substantial role in The Beauty Jungle (1964), a light expose on the tough world of modelling, opposite Janette Scott. Look out for Carole Ann Ford in the film, appearing here the year before she played the Doctor's grand-daughter, Susan, in the very first episode of Doctor Who, when it began in 1963. 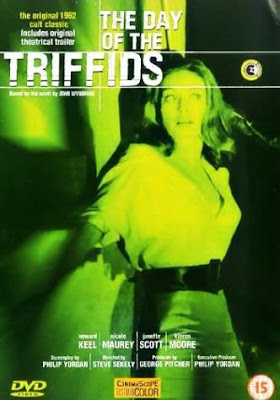 So far, the DVD releases of The Day of the Triffids have been well-framed 2.35 widescreen, but never anamorphically presented. The source material has been a scratchy print with faded colour. This is poor treatment for such an early widescreen colour sci-fi film. It's also a noticeable standards conversion from NTSC. The various DVD and laserdisc releases seem to have all been sourced from this one analogue master. So far, an entertaining trailer has been the only DVD extra. 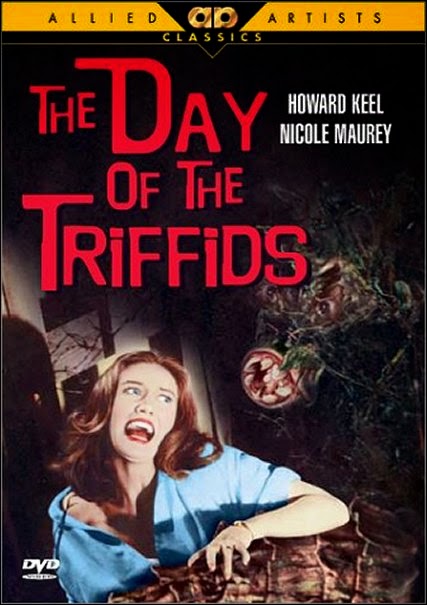 What's needed is a digital remaster from a decent print, or dare I say negative? And in a fantasy world I'd love to see some of the film's deleted scenes. For instance, the stills below, from sixties monster mags, hint at possible missing scenes from the airplane sequence. In the finished film, there are no triffids on the plane, but here we see one among the passengers and in the cockpit (killing the radio operator). 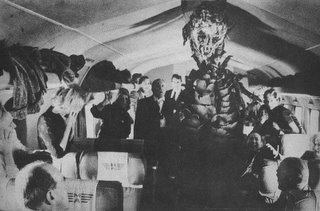 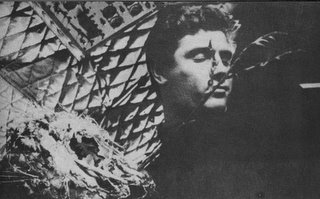 Recently over on the scholarly Classic Horror Film Board, there's good news that a new restoration could be nearing completion, overseen by Ignite Films in the US. Hopefully the project will eventually hit DVD. I'd also love to have Ron Goodwin's pounding soundtrack! That's looking very unlikely, but an excellent re-recording of twenty minutes of the score have been released by Monstrous Movie Music on their This Island Earth CD release. Considering Goodwin also provided eerie scores for Village of the Damned and it's sequel, his fantasy soundtracks are sorely missing from our CD collections. The liner notes include the most extensive information I've ever seen about the making of The Day of the Triffids.

I've never cared much for the 1981 BBC TV series, despite the more faithful approach to the book. It's far too light on devastation and triffid action. The recent mini-series veered further away from the book, and the triffids.

Other John Wyndham novels have been adapted as films and TV, one of our most influential sci-fi writers since H.G. Wells. Most famous are 'The Midwich Cuckoos' (inspiring Village of the Damned) and Chocky. Though I'd love to see an adaption of his 'The Kraken Wakes', an invasion of Earth from beneath the sea...