THE MAN THEY COULD NOT HANG (1939) serial killer Karloff

Part of the Boris Karloff Blogathon organised by The Frankensteinia Blog. 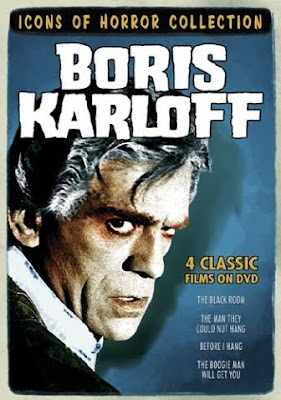 I can't enter the blogathon without taking time to just talk about Boris. There are some actors who I will watch literally anything with them in. They're always good, even if the film isn't, but a lion's share of Boris career were at least half decent horrors, no mean feat for such a long career in the genre. He somehow made the films better, or maybe made bad dialogue sound believable. Maybe he had the power to change things (like dialogue or his character) for the better. He always changed his appearance - hairstyles, colours, beards, moustaches, scars - you can easily name a Karloff film from photographs of his character. For instance, in The Man They Could Not Hang, his shock of straight white hair and dark eyes is instantly recognisable from this film only. The actor I most compare him to is Peter Cushing, another brilliantly intensive actor who could make corny sound good, the unbelievable sound real - a real talent in surreal and supernatural horror. Perhaps they were too similar to appear together, they certainly had the opportunity when Boris returned to England at the end of his career, when British horror was still flourishing. They were both British, both mainly in the horror genre, both gentle gentleman offscreen. Unafraid to do horror for fear it would damage their career, they recognised that typecasting was a good, steady earner.

I had a shock the day I saw a Boris and Bela movie at the Castro Cinema in San Francisco, I think it was 1998. It was a very rare chance to see a vintage horror, The Black Cat (1935), on a huge screen. As Bela Lugosi's name came up at the start, there was a cheer and applause. When Boris' name came up there wasn't a single sound from the audience. I was so shocked. The supposed rivalry between the two actors was still being fought in the magazines of horror fandom. I know that Bela was very much seen as the underdog of the two. But for a horror audience to snub Boris like that, so unanimously, I assumed it was some sort of anti-British sentiment. How rude!

To me his career eclipsed Lugosi's in terms of creativity, range, longevity and sheer quality. Lugosi usually played the same character and rarely changed his appearance, not even for Dracula (White Zombie and Dead Eyes of London are the only exceptions I can think of). He repeatedly picked dreadful projects, even early on in his career when he was world famous. Don't get me wrong, he's a huge part of the horror genre and I love watching him, but if you ask me to choose between his films and Boris, there's no contest. 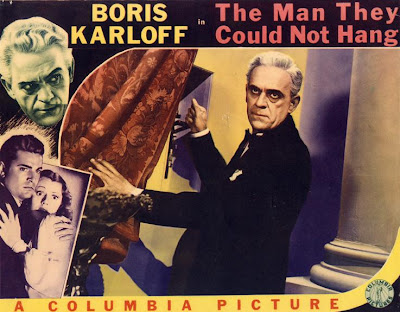 THE MAN THEY COULD NOT HANG
(1939, US)
This starts like a typical Karloff 'mad doctor' yarn, but takes an interesting sharp turn halfway, into the world of creative serial killings!

Characteristically, Boris plays a scientist tinkering in medical experiments, until the lawmen bust in and ruin everything. In the courtroom, the jury are intent on sending him to the hangman, rather than considering the scientific facts of the case. Angry that his breakthough work to help humanity has been mistaken for murder, without the chance to clear his name, he turns a vengeful eye on the judge and jury, threatening them to an early grave, despite his impending execution...

The court scenes and the climax in the mansion are in handsomely constructed sets, the courtroom filled with extras. A larger budget is also in evidence compared to many of his later mad doctor 'b' movies. The well-defined black and white camerawork also implies that there was time to light the scenes carefully and creatively. There's even an unusual tracking shot that tilts out of a dutch angle as it pulls back.

The story is an early example of a madman working his way through a well-prepared shitlist (like the Vincent Price classics The Abominable Dr Phibes and Theatre of Blood). It also verges on the teritory of The Cat and the Canary as his intended victims are assembled together in an old dark house and told the order that they will die (a trick of Dr Fu Manchu). There's even a murder method that was repeated decades later in Dr Phibes Rises Again.

Fast-moving and visually rich, this is one of Karloff's best thrillers which didn't rely on movie monsters. The story is dramatically strong enough to sustain the scientific shortcomings at the centre of the plot. The lively and convincing cast are consistently good, though short of familiar faces. And I always love it when the dead return to torment the living... 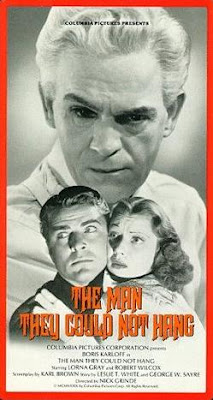 After a long exile on VHS, this film is newly out on DVD - the pick of the 'Icons of Horror Collection' boxset, (pictured at top).


For those in the mood for more Karloff, there's a rare screening of The Man Who Changed His Mind a 1936 mad doctor movie made in Britain, also starring the spunky Anna Lee (Bedlam and In Like Flint). At London's BFI SouthBank on Thursday, December 3rd.

The lobby card above is from the excellent The Walter Film Gallery.

More thrills with Boris can be found in my extensive look at his much later Die Monster Die (1965).