SCREAM AND SCREAM AGAIN (1970) quite a scream, actually 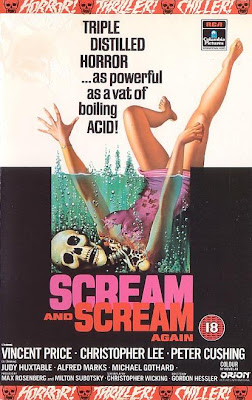 SCREAM AND SCREAM AGAIN
(1969, UK)
I was buying horror film magazines before I was old enough to see the films. After seeing the photostory in For Monsters Only magazine (really great photo spreads) and reading the Peter Saxon book The Disorientated Man, I was oh so very ready to see Scream and Scream Again when the opportunity arose on late night TV in the late 1970s.

I wasn't disappointed - dismembered body parts, gallows humour, nudity (well, that dodgy 'naked young woman on a mortuary slab' nudity) and an essential cast. Peter Cushing, Christopher Lee, sorry, Sir Christopher Lee and Vincent Price all in a movie together (but not all in the same scene though). 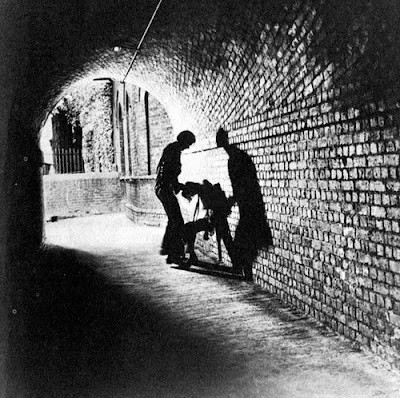 The unusually splintered storyline is carried over from Saxon's novel. A runner clutches his chest and passes out in the street, only to wake up in a strange hospital room where he discovers he's now missing a leg. A rogue general is murdering his way into power in a takeover bid of an unnamed Eastern bloc country. A serial rapist who murders his victims and drains them of blood, is loose in London, preying on young women he picks up in 'happening' nightclubs. Three isolated storylines that gradually intertwine.

The story structure leaves the audience scrambling in the dark for clues for much of the film, also trying to follow a large cast of characters. But it's fun, fairly vicious for the time, and it eventually starts to make sense. 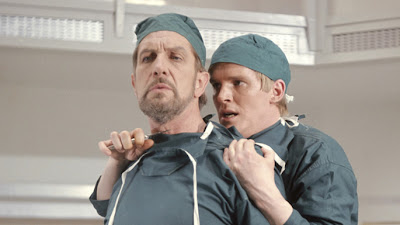 The three giants of horror, Cushing, Lee and Price, later appeared onscreen together in The House Of Long Shadows (1983). Any of them in a film usually makes it worth seeing. But besides the big three, there are other familiar faces for genre fans - keep an eye out for Peter Sallis (Wallace & Gromit, Taste The Blood of Dracula), young blonde Yutte Stensgaard (Lust For A Vampire), young blond Christopher Matthews (Scars of Dracula, Blind Terror), Michael Gothard (The Devils, Lifeforce) and the deadpan wit of Alfred Marks - an unusual straight role for this expert comedy actor. 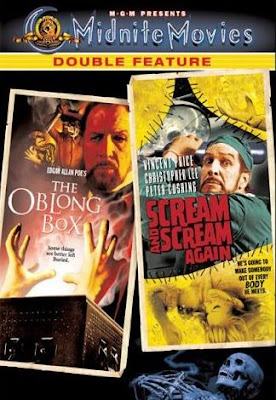 When the film eventually hit VHS, and even for a while on TV, it had a re-scored soundtrack, with groovy library music replacing songs by The Amen Corner (the nightclub band) and a less effective synthesizer score replacing the original. The same problem that Witchfinder General had until very recently. Thankfully the original music was restored and the picture remastered in widescreen for MGM's DVD double-bill with The Oblong Box, which is also well worth seeing. The film is in anamorphic widescreen and includes an original trailer (chock full of spoilers, mostly using shots from the climax).

If you want a slightly mad, fast-paced, seventies mystery with outbursts of violent horror and a screeching car chase, here it is. You'll even see that most cliched of sexual symbolism, the suggestive fondling of the sportscar gearstick... 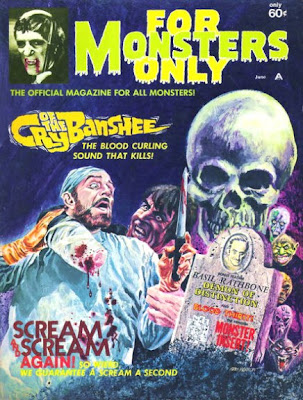 For Monsters Only cover courtesy of Monster Magazines blog (because I can't lay my hands on my own copy right now). Once again the cover art was by Gray Morrow.
Posted by Mark Hodgson at 12:59 pm