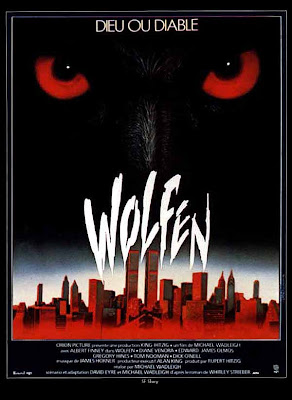 1981 was the year of the wolf. You've probably seen An American Werewolf In London or The Howling from that year. But there was also the release of this big budget horror/thriller set in New York. The mystery lies in the identity and species of the murderer. Is it man, animal or a shape-shifter?
The premise is quickly established. Why would anyone ambush a wealthy couple in the middle of the night, slaughter and dismember them... but leave their jewels and money. Then cross the river to a desolate suburb and murder a homeless junkie and eat his brains? Rogue detective Dewey Wilson (Albert Finney) is brought back into the force for the case. But strictly sticking to the clues logically leads him to some unbelievable conclusions...

Bearing in mind this is based on a book by Whitley Strieber and directed by Michael Wadleigh, you might be better prepared for a less conventional story. Strieber later wrote Communion in which he described his own alien abduction experience. Director Wadleigh's only other film was the music festival Woodstock. Into a fairly simple plot, the two pack in layers of interesting ideas and details hinting at the displacement of wildlife, the poverty gap and native American mythology. It's not preachy, more like a trickle of ideas hinted at by the detailed close-ups he uses in each scene. Some of which makes you think the story is leading in a different direction.

A drawback for today's viewers is the slow story development, with the detectives lagging far behind anyone who knows the title of the film. This isn't straightforward horror like American Werewolf or The Howling, nor quite as gory. It's more of a 3.00 in the morning movie, where the visual experience is as important than the story. It's very well acted, suspenseful, and looks and sounds unusual too.

After seeing it on first release, Wolfen has remained a memorable and repeatable experience. As much for the gritty approach (the matter-of-fact pathology lab scene is full of edgy moments) as the locations and ideas. Like a leftover eco-thriller from the 70s, a Soylent Green set in modern day. 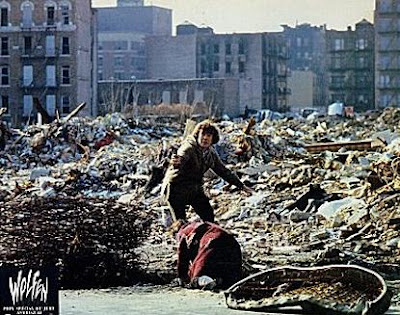 The startling locations are all within a few square miles of the southern tip of Manhattan, starting with a murder in Battery Park, then the questioning of maintenance workers on top of the Brooklyn Bridge (a terrifying scene which could only have been shot by actors Finney and Olmos actually being up there), to a horrifying vision of the Bronx as it was at the time. Trapped in limbo between total demolition and reconstruction. It looked post-nuclear, only a few trashed buildings left standing. Of course, shooting a film around this area at this time can't help include many ironic shots of the World Trade Center, a counterpoint to the desolation and poverty of the Bronx.

Wolfen was originally presented in 70mm and surround sound, the then-equivalent of IMAX, but sadly this audio hasn't yet been remixed into a 5.1 track for the DVD. Which is a shame for such an aural experience - there are extensive visual effects to denote when we're looking through the creature's eyes, there's also extensive audio effects to represent how they hear. Technically, the cinematography was quite startling at the time, demonstrating the relatively new steadicam camera harness to the full, as the roving point-of-view camera acts just like a beast on the prowl, stalking it's characters. Steadicam's inventor, Garrett Brown, was the main camera operator for many of those scenes.

In the cast, you may recognise Albert Finney under the wild shaggy hair, from Miller's Crossing. I think his American accent is pretty good here, but what do I know, I'm also English. In the UK, he's better known as an angry young man from the 1960s new wave of actors with working class accents. He later won an Oscar for starring in Murder on the Orient Express, as French master detective Hercule Poirot.

Battlestar Galactica's Edward James Olmos is almost unrecognisable, even compared to his role in Blade Runner the following year. As a (very, very) angry Native American bridge worker. Even when he's running around naked, he looks totally dangerous.

A young Tom Noonan (Manhunter, The Monster Squad) gives a typically intense performance as another wolfy suspect... The late Gregory Hines (The Cotton Club, Eve Of Destruction) gets an icky role as an adventurous pathologist.

The soundtrack is an early score from James Horner, back when most of his music echoed Alien. It's good, but distractingly derivative. Maybe something to listen to once you've run out of Jerry Goldsmith soundtracks.

If you want a less traditional monster movie, served up with your body count, the sights and sounds of Wolfen could be for you. 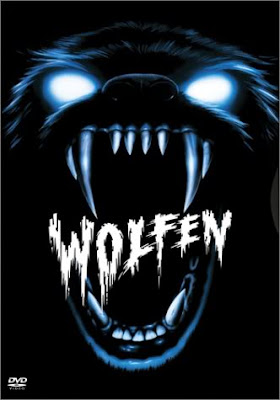 It has been out on DVD in the UK and US in 2.35 anamorphic widescreen. But only in two-track stereo so far. With An American Werewolf In London coming to Blu-Ray soon, and Benicio Del Toro becoming Wolf Man next year, maybe it's time for a Wolfen reissue?


(See also the director of Wolfen, Michael Wadleigh, talking about the film at a screening in london in 2013.)
Posted by Mark Hodgson at 3:00 pm