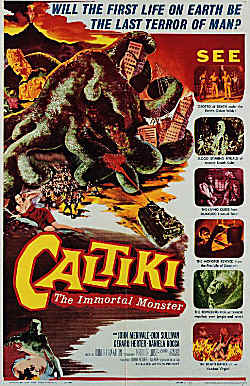 How many Blob movies have you seen where someone loses an arm?

This is an update of my 2006 review, now that I've watched the region 2 Italian DVD from NoShame. This is Caltiki's first time on an official DVD release. I was hoping that the 50th anniversary would yield a release in the USA, but it's looking unlikely...

Each time I watch Caltiki - The Immortal Monster, I'm astonished that it hasn't had a better history on home video – it’s one of the best black and white horror films, indeed sci-fi films, to come from Italy. It’s firmly in the genre of 1950s American monster movie, strongly reminiscent of The Black Scorpion, short on science and long on fiction...

On an expedition in Mexico, a team of scientists discover a lost cave uncovered by a volcanic eruption. Deep underground is a statue to the immortal god Caltiki. Nearby is an undergound lake containing the immortal god Caltiki! As the huge slimy blob makes a break for freedom, the party discovers that it has touch like acid, as one member loses an arm and another loses face (reminiscent of a similar scene in Hammer Film’s blobby X-The Unknown from 1956).

The Prof gets a sample off his best mate's disintegrating arm and takes it back home for closer study. He stores it in a goldfish tank in his basement! As the danger grows, you at least wish he'd put a couple of heavy books on the lid. There it starts to grow, putting the Prof’s wife and daughter in deadly danger, not to mention the rest of the world! 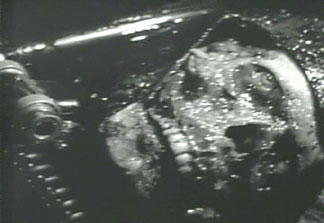 The plot takes a few amusing wrong turns: coincidence dictates that the scientists discover Caltiki's secrets just as it wakes up for the first time in 1300 years. Also, during the hero’s final race to the rescue, the police arrest him for speeding and throw him in jail! The film grinds to a halt as he tries to talk his way out.

But it’s not the plot that’s interesting, the blob looks fantastic! There’s some amusingly cheap miniature work, (despite the darkness of night-time scenes) including some toy tanks that wouldn’t even get into a Godzilla film. But the blob on the attack is sensational. It’s movements are fascinating, and the face-dissolving effects almost belong in Cabin Fever – goodness knows what shock effect they had on audiences 50 years ago.

Similarly shocking is a scene where a dancing girl amuses a lucky crowd of Mexicans in a woodland campsite. Besides her sultry and athletic dancing, her incredibly short tattered skirt does little to cover her up, leaving little to the imagination. The 1960s were fast approaching... 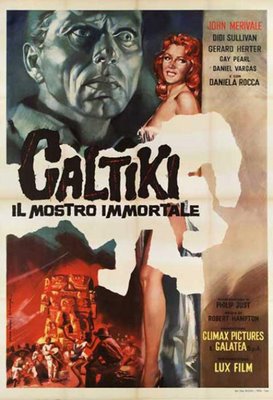 Famously, future horror maestro Mario Bava created most of the special effects and completed the direction of this film – the year before his masterpiece Black Sunday (aka The Mask of Satan) propelled him and leading actress Barbara Steele to success. Bava’s ambitious, low budget, special effects make the story look a hundred times more interesting than it could have been. Like I said, some of the miniature work doesn’t stand up today, but the majority of it is marvellous, giving us horror-fans plenty of blob action. I’m assuming that Tim Lucas, the editor of Video Watchdog, goes into more detail about the making of the film in his gigantic book about Bava.

I recognised the lead actor, John Merivale, from the wonderfully sleazy Circus of Horrors, made the following year. It adds to the madness of the production that an Englishman starred in an Italian movie partly shot in Mexico…

The non-blob scenes are just as watchable because of the amusingly cliched emotional dramas and the hysterical acting. The two female leads are suitably overdramatic, trapped in a complex love quadrangle with the Prof's best friend, Max. He's played by Gérard Herter, who almost climbs the walls as his blob-infection cranks him up into psychotic madness. He also does some amusing 'head acting' snuggled up in a hospital bed.

Pacier, gorier and better shot than many of Hollywood's 1950s sci-fi monster movies, this was finally made available in both the Italian and English-dubbed version on an Italian DVD. Though John Merivale has been looped by an American actor for the English version. This region 2 DVD is anamorphic widescreen, whereas all previous TV versions notably cropped the sides of the picture considerably. This is the clearest version I've seen, but there are stil some severe problems with contrast in the early day-for-night scenes, huge clouds of darkness sometimes swallowing parts of the image. The intricate matte paintings in the Mexican scenes lose detail in the darker shadows. These are probably film faults on the original print, maybe even the negative, but I guess an Italian release is as close to the source as possible.

The original Italian titles are at the start, but the US release title sequence is also available as an extra, as well as a US trailer giving away all the best shots. The interview with Luigi Cozzi is unfortunately not subtitled, and the accompanying booklet is all Italian text too. The cover art uses the original Italian poster art (above).

I'm just happy to finally have a widescreen DVD of this classic early monster.

DVD Talk reviewed the DVD when it was first released. It's hard to get hold of now, but if you're good at Italian, try here...