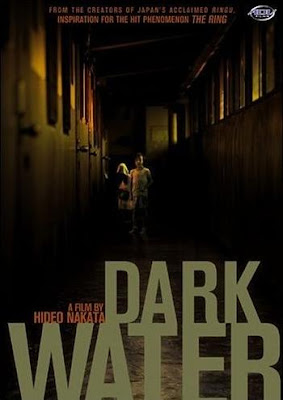 DARK WATER
(2002, Japan, Honogurai mizu no soko kara)
From the director of Ring, from the writer of Ring...

I recently read Koji Suzuki's Birthday, which I didn't know was a collection of short stories. I then read his Dark Water, which turned out to be the same. This helps explain why the Japanese movie Dark Water feels a little insubstantial. It's not based on a novel, but a rather brief tale. That's not to say that it's not good, but it's rather simple. 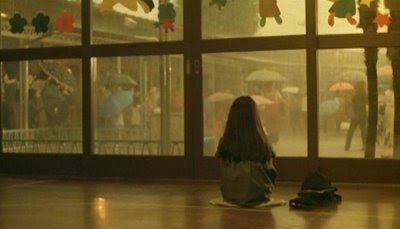 As the two of them settle into their new home, dripping water coming from the ceiling is the least of their problems. It sounds like there's a little girl running around in the apartment above. The estate agent hasn't told them everything about the recent history of the building - they're finding out the hard way. Why does she keep seeing a distant shadow of a little girl in a raincoat... 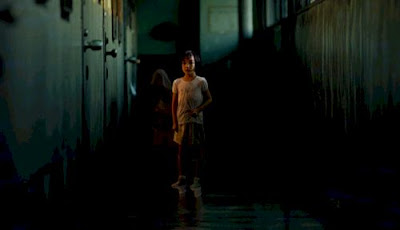 While the mystery of the haunting is easy to figure out, it's interesting to see how it develops. I even thought that the scares started too early on. The first time Yoshimi looks round the apartment, a ghost follows her up in the lift - before she's even moved in! Considering how sleight the story is, padded out by the divorce case, I was surprised that the supernatural didn't appear more gradually.

Director Hideo Nakata had tried to stay away from horror and ghosts, fearing that he would get typecast after his huge hit with Ring (1998). He was lured back to make the sequel Ring 2, but also made Chaos and Sleeping Bride. With Dark Water, he shows that Ring was no fluke, and easily conjures up scares with a minimum of effort. What initially disappointed me was that the climax was not only predictable, but fell far short of the shocks of Ring. In fact, the eventual climax felt weak - just the opposite of what I expected. I certainly liked Dark Water far more on a second viewing. Just forget the hype on the DVD cover and don't expect another Ring.

The producers were obviously trying to monopolise on the link with Ring, even using actors from the Ring universe. The nervy Yoshimi is played by Hitomi Kuroki who also starred in the first Ring TV series. She's in the current 20th Century Boys trilogy and Hideo Nakata's recent Kaidan.

The distinctive-looking Isao Yatsu, as the ancient building superintendent, had been in Ring 2 and later appeared in Takashi Shimizu's Grudge movies. A great face for haunting horrors. 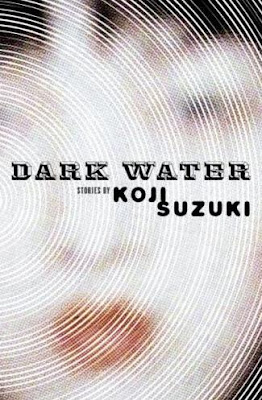 Dark Water is available in the UK and US on DVD, but it's easily confused with the 2005 American remake of the same title. The English translation of the book is available in hardback and paperback.

I'm curious, but I haven't made a priority of seeing the remake, even though I like Jennifer Connelly. Anyone out there seen it and thought it was worth a look?
Posted by Mark Hodgson at 2:39 pm