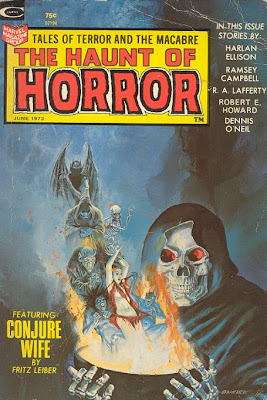 THE HAUNT OF HORROR - issue 1 (June, 1973)
One of my favourite pieces of cover art adorns this early incarnation of Stan Lee's The Haunt of Horror. Before the pulp magazine became a comic strip, it started as a collection of short stories. Robert E. Howard (author of Conan and Solomon Kane) provides 'Usurp The Night', Fritz Leiber has 'Conjure Wife' (filmed as Night of the Eagle) and Ramsey Campbell (currently writing for Video Watchdog) has 'Night Beat', among others.

This mag also has sentimental value because I bought it brand new in the lobby of the Hotel Commodore, just down the avenue from Grand Central Station, on a family holiday to New York in 1973.

The cover painting is by the late Gray Morrow. I love the realistic death's head and the varied, very dimensional creatures dragging the nubile to her doom... I didn't see any other issues of this back in the UK, and have only recently seen mention of the magazine as a comic, similar to Creepy and Eerie (which Morrow also painted covers for), a large format black and white strip full of short tales.
Posted by Mark Hodgson at 8:07 pm