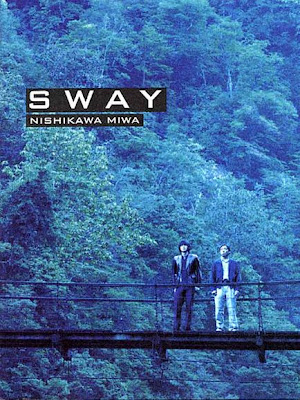 SWAY
(2006, Japan, Yureru)
This year Japan won the Academy Award for Best Foreign Language Film with Departures, as if proof were needed of the high quality of the country's cinematic output. But it's not the only film to be highly-praised in recent years.

Yureru is hard to categorise exactly, part drama part mystery... I was expecting more of a thriller and it is, kinda sorta, but very well-produced. With an unpredictable story, it also avoids using cliches. 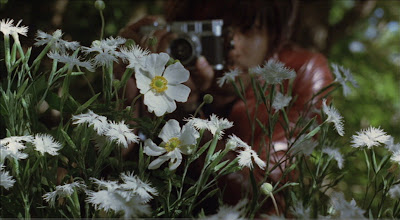 Takeru is a successful Tokyo photographer with a racy metropolitan lifestyle. When he returns to his small hometown for his mother's funeral, fame holds no sway - he's just another local boy. He's back to arguing with his father, feeling sorry for his older brother and his regular job at a petrol station, and still fascinated by a local ex-girlfriend. On a nostalgic day trip, past tensions erupt and everything changes.

While Yureru starts off as a quirky family drama, carefully contrasting city and smalltown life, modern ideals with traditions, the tone brilliantly shifts to something far more serious. Everything that seemed to be smalltalk and inconsequential detail in the opening now becomes crucial to the outcome of the story.

Very interesting to see part of the story take place in a Japanese courtroom. Not something I've ever seen before. Coincidentally as I write this, the procedures are already out of date, now that Japan has (just last week) re- introduced the jury system for the first time since World War 2. 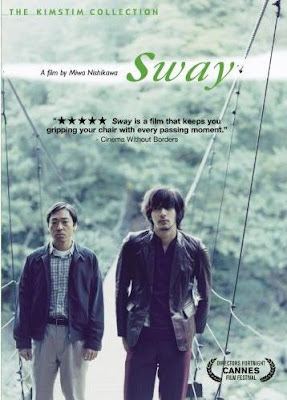 The acting here is so good that it's unnoticeable. I felt that I was watching the characters and not actors. Joe Odagiri (Mushi-shi, Shinobi, Azumi) is a natural choice as the trendy Takeru. Teruyuki Kagawa (star of Tokyo Sonata) plays his long-suffering brother, Minoru. Again a very convincing and natural performance. Yoko Maki (The Grudge - US version, Kansen) gets the enviable role of Chieko, the object of Takeru's affection.

Further down the cast I'll make a completely misleading connection with two actors I recognised from the world of Sukeban Deka, the schoolgirl yo-yo cop! An altogether different style of entertainment, dependent on action rather than acting! It must be stressed that they're both excellent in Yureru. Masato Ibu who plays the father, was the arch-villain in Sukeban Deka - The Movie. twenty years ago. A very watchable and ersatile actor, I last saw him in the time-travel comedy Bubble Fiction. Also, as Osamu the lawyer, Keizo Kanie once played Saki Asamiya's controller in the second TV series of Sukeban Deka.

Yureru is a tense story, full of rewarding detail, with restrained realistic performances. A refreshing change from giant robots, ghosts and monsters, instead a look at two colliding aspects of modern life.

Very glad to see that this has had a recent US DVD release. 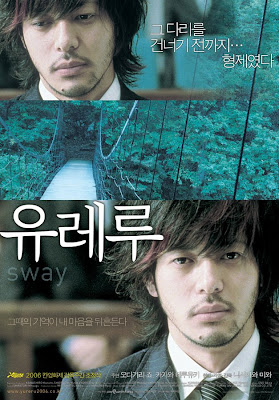 If you see it, let me know if you can tell where the bus in the final scene is going... Is the destination on the front important to the story...? My Hong Kong DVD had no subtitle for the sign on the front! The cover art misleadingly excludes everyone else from the cast except Joe Odagiri. He's a star of the film, not the star.