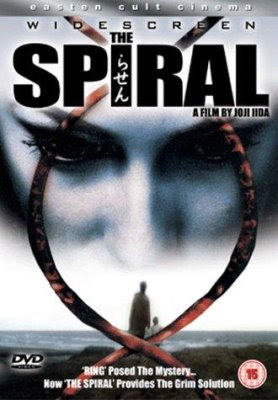 SPIRAL
(1998, Japan, Rasen)
Continuing a series of reviews from the Ring phenomenon

The success of Ring (1998) in Japan lead to a successful sequel Ring 2 (1999) and a prequel Ring 0 (2000). But their stories were drastically different to Koji Suzuki's original books, and ignored the events of the very first sequel, Spiral, which was actually released at the same time as Ring. While Ring was immediately popular, Spiral wasn't, encouraging producers to pursue a different storyline for Ring 2 the following year.

Ring 2 gave audiences more of what they (we) wanted - more videotapes and more twitchy, scary Sadako. But Spiral primarily uses ideas from Suzuki's second novel, with a subtler but ultimately far more horrifying scenario where Sadako could become more powerful than you could possibly imagine... 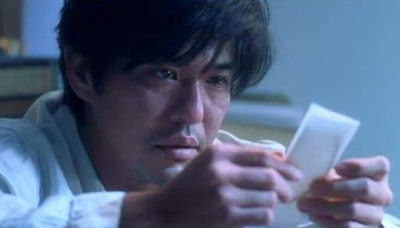 Spiral begins the day after the events of Ring, with a pathologist being called in to perform an autopsy on a former colleague, the latest victim of Sadako. He finds himself haunted by his former friend and how he died, mixed in with his suicidal despair over the accidental drowning of his young son (shades of Suzuki's Dark Water).The cause of death makes no sense to him, neither does talk of a cursed videotape. He teams up with a journalist to investigate, while more and more witnesses continue to die mysteriously.

When Sadako appears, she's not shrouded in black hair and a shroud, but a sexy nightdress. Another change of tactics is to spread her curse in other ways besides boring old videotape... 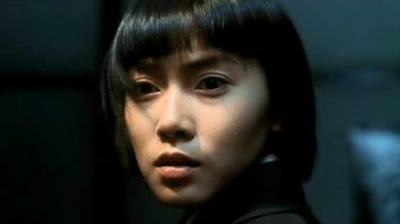 When I first saw this, when it was confusingly being sold around Asia as Ring 2: The Spiral, I was disappointed with the lack of videotape deaths and the twitchy, jerky Sadako that we all love. But over the years, and being less impressed by re-watching Ring 2, Spiral is now my favourite of the sequels. A better story, that doesn't suffer by repeating the highlights of the first film.

This is as much a medical thriller as a horror. But the scares are subtle and effective. The growing realisation of what Sadako is planning is both dramatic and very powerful, reminiscent of Kiyoshi Kurosawa's Pulse (Kairo). Director Joji Iida went on to direct Another Heaven and the post-apocalyptic Dragonhead.

It's also interesting for Ring fans to see the same characters, with the same actors, following completely different paths than they take in Ring 2. Suzuki's books are so full of ideas that the stories about Sadako can spin off in many directions.As a title, Spiral is an undescriptive name and the original generic poster art didn't help. Ring: Virus would have been a more apt title, but confusingly the South Korean remake (1999) was called that. Speaking of which, I'll review that one next. Eventually I'll also plough through the TV series made of Rasen in 1999. Spiral is available in the US Ring Anthology boxset, under the Japanese name, Rasen. It also used to be available in the UK as Spiral (artwork at top).

There's plenty of screengrabs, but a less good review over at The Ring Cycle site.

Links to the other Ring movie reviews are here on the Ring Overview.