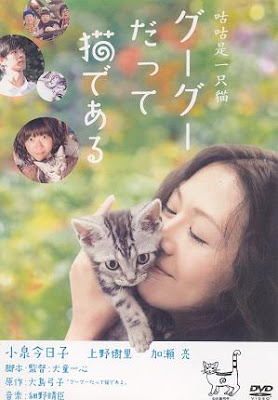 GU GU THE CAT
(2008, Japan, Gou-Gou datte neko de aru)
Hollywood makes a lot of dog movies. I live in a nation of cat-lovers which doesn't make cat movies. I didn't know much about Gu Gu The Cat when I bought it, but I just fancied seeing a cat movie, figuring that if the Japanese are as cat crazy as the British, it could be fun. I was expecting something fluffy, trivial, with lots of cute cat action. Slightly right and mostly wrong.

If I was Japanese I might have known about Gu Gu from from its series of manga, which features a cat but centres around its owner. The story is actually autobiographical and leads us through a crisis point in the life of the artist/writer Yumiko Oshima. 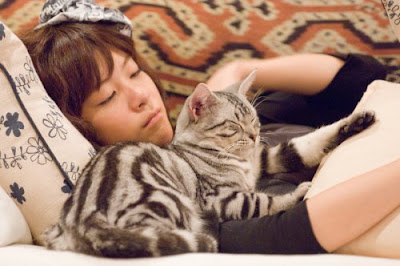 In the story she's called Amiko and it begins with her finishing her latest manga. She supervises a team of four woman who help ink and correct all the final artwork at her home. After a late night deadline, when everyone's gone, she discovers that her 15 yr old cat has passed away while she was busy. Distraught at losing her companion, she completely stops writing, leaving her team out of work.

After several worrying weeks, her team are relieved when Amiko gets a new kitten, Gu Gu. But this new bundle of fun doesn't break her writer's block. On top of losing her old muse, her mum is pressuring her middle-aged daughter to go out and find a husband...

This is largely a lightweight comedy freewheeling along from day to day, portraying life well away from the centre of Tokyo in the district of Kichijoji, which is good for parks and creative types. It could be called a chick-flick, but doesn't conform to any Hollywood cliches, other than having a cast of mostly women. It's a little unconventional but not at all challenging. My favourite scene was a gently surreal dream sequence, where Amiko talks with her cat. This isn't done the usual Disney way, but far more mystically, serious and low key. A gentle comedy, it gets a little more serious when Amiko gets ill, just as the author did. 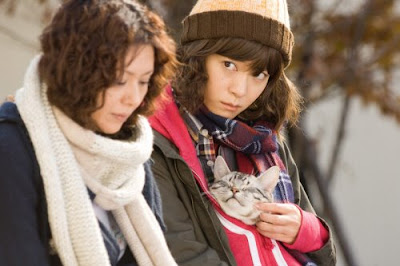 While the rambling plot establishes many characters and storylines, there are few payoffs. If the film wasn't called Gu Gu The Cat, you wouldn't even consider the cat was a main character. But this wasn't a problem as I was in an undemanding mood and enjoyed just drifting along with this slightly soapy slice of life, dreaming of living in suburban Tokyo. This an area renowned for writers and authors and it's interesting to see how Amiko is politely revered as a local treasure, and that the launch of a new manga is mounted as serious as any highbrow booklaunch. The ubiquitous Kazuo Umezo (who also popped up in Yaji & Kita) cameos in a couple of scenes - so that's where he lives!

It's a refreshing portrayal of the lives of several different modern day Japanese women, who are usually missing from the kinds of films that I usually watch. But I would still have liked to see more of Gu Gu the cat, despite his pivotal role. Throughout the film, a part-time narrator speaking in English and Japanese is slightly scary because of his faltering acting and his huge perm. Don't worry when he pops up to the set the scene at the beginning, he's not in it too much, and he improves as it goes along.

The Chinese DVD I watched had English subtitles on it, as does the Japanese release. In the extras it was also fun to see a TV ad tied to the film release, promoting a new sort of cat litter tray!

Here's another review at Lunapark6. 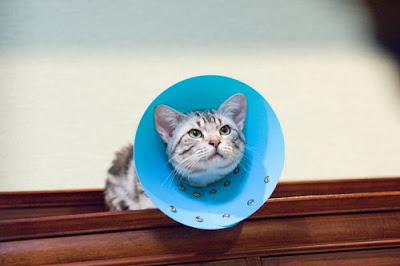