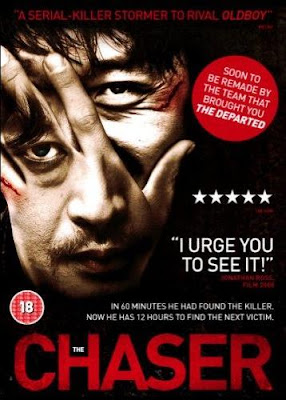 THE CHASER
(2008, South Korea, Chugyeogja)
Heard this was a hit serial-killer thriller and decided to have a look. Easy enough, because it's already been released in cinemas in the UK and now on DVD. The Chaser was a big hit in South Korea. While very good, it's not a classic like Oldboy, despite many comparisons and similarities. It's already good enough to soon get remade in Hollywood.

I can't give up too much of the story, as much of the enjoyment is how it unfolds. But our unlikely protagonist is a pimp who's having trouble keeping track of his women. Two have gone missing and he starts to suspect that a third might be in danger of being abducted by a rival. We soon know different, following her to the client, where she realises that she's not in a pimp war, but actually being prepared for slaughter... 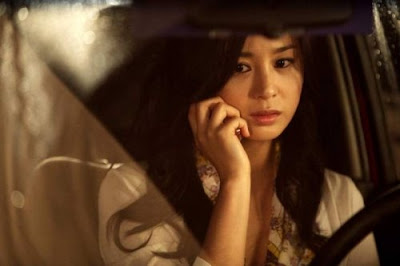 There's enough South East Asian movies that pit serial killers against inefficient detectives to fill a whole sub-genre (including Zee-Oui, The Untold Story). This is particularly a key issue in South Korea where serial murders are a new phenomenon (Memories of Murder was about the first ever case). The plot highlights dozens of faults by the investigators and legal team, that cause it all to drag on. It's a far cry fom the high tech methods of CSI. In fact it's so slack that many moments are intentionally funny, in the darkest possible way.

After the film, I learnt that this was an actual recent case. While the story deviates from the truth on many points, it must have helped the box office.

I was thus reminded of Dirty Harry, itself inspired by the Zodiac killer, but also because it takes a renegade working outside the system to cut through the legal red tape, cynical policing and party politics in order to help the innocent. 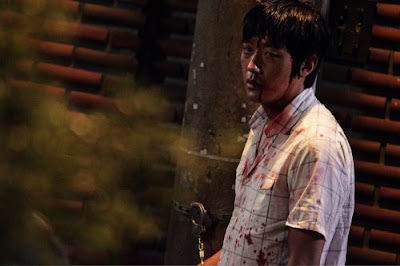 Though in The Chaser, there's a damaging lull in the centre section of the film as everyone is so completely off track that the audience has to sit and wait until the 'ticking clock' can continue. While the director may have intended this to be suspenseful, I was losing interest because so many of the characters were hopelessly lost in the case.

That said, this could be an effort from first-time director Hong-jin Na to avoid movie cliches. The opening half hour is superb and gripping. The cast are excellent, the film is technically top-notch. But the story ignores many loose-ends and uses far too many coincidences. It's certainly unpredictable and full of surprises, possibly because this is what actually happened. But far too flimsy for a fictional story. 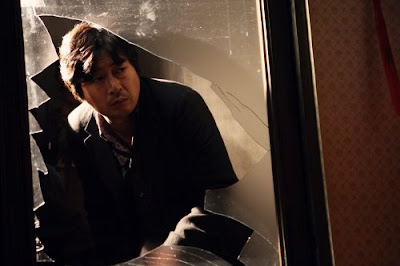 The Chaser is still an undeniably powerful, dark, surprising and watchable thriller. With a couple of moments that are unwatchable. Well, I certainly couldn't bear to look. But, I will look forward to the director's next film, The Murderer.

This is out in the UK on DVD from Metrodome, in a good-looking 2.35 anamorphic presentation.