HAKABA KITARO (2008) - the graveyard origin of GeGeGe No Kitaro 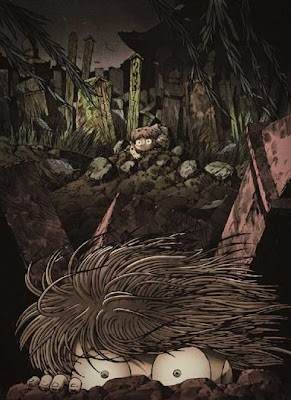 HAKABA KITARO
(2008, Japan, OVA, Graveyard Kitaro)
I've written as much as I can about GeGeGe No Kitaro in this total series guide, which I also keep updated. But while the character is enjoying a revival in Japan, all 400+ episodes of the animes now available on DVD. Creator Shigeru Mizuki has a museum all about his characters, and there's a Kitaro street of statues flourishing as a popular tourist destination in Sakaiminato. But in the west, Kitaro has only recently been represented on home video, by a single DVD release, the first live-action film. We've yet to see any anime, which first appeared back when Scooby Doo was first on TV!

But the animes never fully established exactly who Kitaro is. His origin has remained in the manga, even too scary for Japanese children's TV. Now comes Hakaba Kitaro, a short anime series, shown last year as part of the 40th anniversary of the Gegege anime, which has omitted much of the scarier, ickier side of the early manga stories. Whereas the ghost boy is regularly introduced emerging from a graveyard, like in the TV title sequences, episode 1 of Hakaba Kitaro dares to reveal Kitaro's mum and dad, his ghoulish birth and even the loss of his eye. 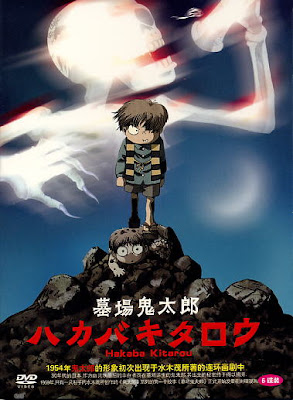 The series develops with Kitaro trying to find his place in the world, a young yokai living among humans. He meets Ratman and Catgirl for the first time, both portrayed to extremes, bigger farts and sharper claws respectively. His father, the eyeball (also explained), guides him towards his various powers as he gets used to modern city life, the lower reaches of hell, and angry yokai monsters.

The anime successfully mixes a deliberately retro style with the latest CGI effects. The drawing style reflects Shigeru Mizuki's earliest Kitaro manga. The human characters look angular and realistic - from before the time when he drew them in a rounded, cartoon style. The early Hakaba manga also provide many of the storylines, though the series interweaves these into a long continuing story. The almost primitive Kitaro character starts as a monstrous, hunched, cackling demon, carefree of the troubles of the world and netherworld, unlike the usual conscientious hero. 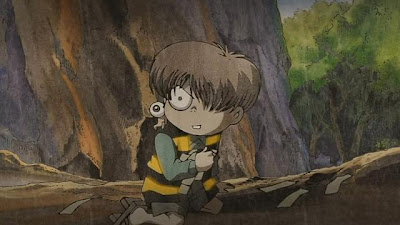 While there is humour, there's also sadness, shock and horror. The scares are often pitched at a level of near-hysterical terror like a Kazuo Umezu manga. There are more than a few echoes of Hell Girl - perhaps the creators are reminding us that Mizuki did it first, with Kitaro and his other early character Akuma-Kun, (Devil Boy), who also wore a stripy shirt.

I found two DVD releases of the series in Kuala Lumpur, intended for Hong Kong and Malaysia, both cramming the eleven episodes onto a single disc. The English subtitles on both were identical and accurately translated. They are the first translated DVD releases I've seen of any Kitaro anime. But while they looked like official releases, with holograms and carded sleeves, and bought in official video stores, the unreliable performance of the discs indicates otherwise.

But I look forward to a time when this rare scary anime is widely enjoyed as a stand-alone series, or as an introduction to this Japanese phenomenon, like the recent live-action films. I'm hoping that one day the many yokai monsters of these series will be seen outside Japan.

There's an interesting, related article about the series and Kitaro's history here on The Japan times online.