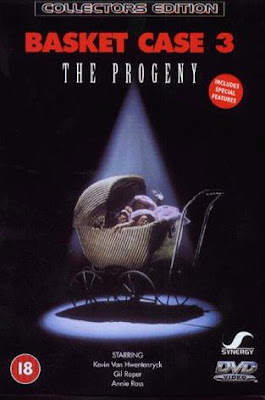 BASKET CASE 3: THE PROGENY
(1992, USA)
There's something you don't see every day

The last of this supremely surreal comedy horror trilogy. It's not easy to follow the bizarre heights of Basket Case and Basket Case 2, but 3 is worth it for more from Granny Ruth, her brood, and a chance to see Belial's brood of bouncing babies.

After a lengthy recap from the end of Basket Case 2, the characters then verbally re-remind us of where the story is at. A few months have passed and there are some new 'faces' at the commune. Everyone's back for the sequel, at least, everyone who survived... But with a looming medical emergency, Granny Ruth drives everyone onto a schoolbus and heads on down to Georgia, where she knows a trusted doctor friend, who is himself blessed with the largest 'freak' of all... a mad inventor called Little Hal.

It's not long before there's trouble with the locals, the police, Duane and of course Belial, who's lost none of his face-ripping charm. Indeed his murder methods have gained a few new twists...

Besides the bloody mayhem, there are a few brief sexual escapades for the Bradley twins, only slightly less bizarre than Basket Case 2. While Henenlotter's films homage grindhouse ideals, lightly exploiting sex as well as violence, he always balances the cheesecake with beefcake. Which means there's something for everyone.

This last Basket Case is the least tidy story of the three, with scattershot ideas and dozens of characters. There's more comedy, and more of it is less successful, but the hits are worth the misses. While the highlight, or is that lowlight of Basket Case 2 was a parallel sex scene, Basket Case 3 satirises the miracle of birth like no other movie... 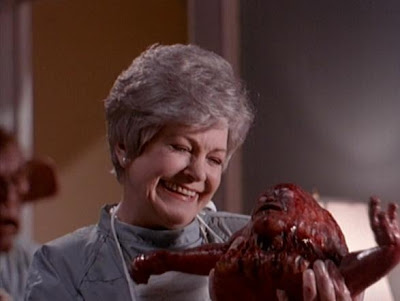 The music is exceptionally cheap and cheesy, a really nasty-sounding synthesizer trying to stand in for an orchestra. But Basket Case 3 also features the musical highlight of the series, as Annie Ross flexes her vocal muscles with an apt rendition of 'Personality'. I was recently hearteneded to learn that she was born in South London, only a few miles from where I live.

All in all, this is a wilder, sexier and more violent than film than Basket Case 2, but less even. This is the only Basket Case still without a special edition. It's only available in a 4:3 aspect, but looks comfortably framed. In many countries, it's included in a DVD double-bill with Basket Case 2. 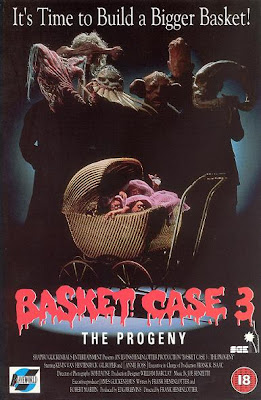 This VHS cover, for the UK rental release, is my favourite artwork for the film, and is strongly reminiscent of the killer baby saga It's Alive (1974), which also stretched to a trilogy. This cover design was recently mirrored in Synapse's artwork for the Basket Case 2 special edition DVD.

On my region 2 DVD from Synergy (pictured at top), the only extras are trailers, but they're extremely entertaining straight-to-video movies - like Dolph Lundgren in Red Scorpion, The Exterminator and the first Maniac Cop. However, the Basket Case 3 trailer is extremely clumsy and stupid - every major plot point and gore effect is lazily spoilered and should certainly be avoided before seeing the film.

Soon, I look forward to revisiting Frank Henenlotter's Brain Damage, just as rewarding as any Basket Case, and then watch his brand new film, Bad Biology.