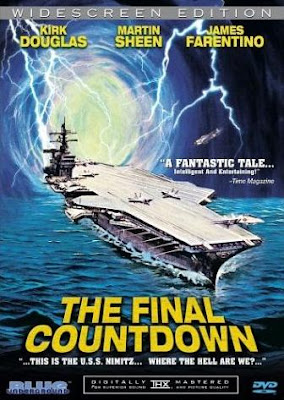 THE FINAL COUNTDOWN
(1980, USA)
This was far better than I remembered in the cinema, when I was expecting a big summer blockbuster movie. High on the possibilities posited by mysterious non-fiction paperbacks like Charles Berlitz' The Bermuda Triangle and The Philadelphia Experiment, I was initially disappointed by this slightly science fiction, naval drama. It's like a single Twilight Zone episode padded out by a US Navy recruitment film. That’s not to say it doesn’t have a certain bonkers charm.

Though the widescreen photography of military hardware would soon be eclipsed by the stylish, kinetic camera-moves and even faster editing in Top Gun six years later, this has a tantalising premise that carries along most of the story. A US aircraft carrier sets sail from Pearl Harbor in 1980, but is sucked back in time to 1941, just before the fateful sneak attack by the Japanese air force. The Final Countdown sets up far more possibilities than it delivers on, but it's Sunday afternoon fun while it lasts. The variable acting from the supporting cast, the actual crew of the USS Nimitz, is bolstered by an impressive display of jets, helicopters, perilous take-offs and landings. 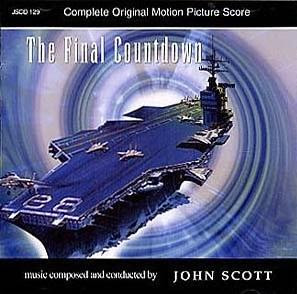 A top-heavy cast tries to pump up the drama of the meagre plot. A battered-looking Kirk Douglas never quite takes it all totally seriously, despite the evidence before his character's eyes, and he looks much older than he did in his previous Holocaust 2000 or The Fury. A young-looking Martin Sheen appears relaxed and grateful to be out of the jungle hell of Apocalypse Now, looking good despite his heart attack during filming. James Farentino (Dead and Buried, Blue Thunder) appears grateful he's not doing TV. Katherine Ross (The Stepford Wives) looks grateful that the so-bad-they're-good The Legacy and The Swarm are behind her.

Bizarrely, future chief of schlock quickie, straight-to-video factory Troma Films, Lloyd Kaufman, not only associate produces here, but gets a bit part as communications officer 'Lloyd'. This must be the biggest film he's ever worked on. In fact, the budget would probably pay for everything he's done before and since. (Update: there's a blatantly honest interview with Lloyd on the Blue Underground special edition that's well worth watching, detailing how the movie could have been very bad indeed, or almost never made at all. Plus a frank account of his experience of the cast and crew!).

Though it's light on special effects (especially considering it was up against The Empire Strikes Back in the cinemas), the impressive aspect is the use of real craft instead of effects. Though James Bond title sequence veteran Maurice Binder produced the beautiful, simple, and scary time tunnel effects - the genre highpoint of the film, heightened by eerie sound effects. While John Scott composed the stirring soundtrack that’s almost too good to be used on this - the music was the only thing I'd actually remembered over the years between viewings. Recently, it's had a CD release, with some interesting liner notes in which Scott recalls his time on the project. He also mentions that his music was 're-used' in Japan and even became a hit single! Anyone out there know what Japanese music in the style of The Final Countdown soundtrack? I'll ignore any quips about Europe...