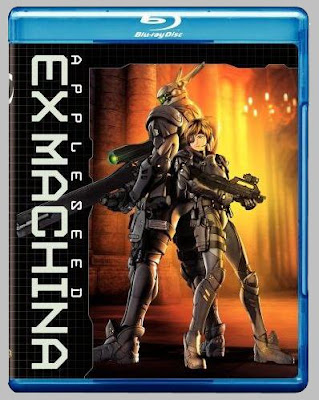 APPLESEED: EX MACHINA
(2007, Japan)
I've not seen or read anything from the Appleseed saga except for the first film, which was very impressive. It introduced me to the scenario of a futuristic post-war society trying to keep the peace after a devastating Third World War.

Cyborg technology now strengthens the police ranks and repairs the war-wounded. Repopulation has been boosted with Clones who've been genetically tweaked not to cause trouble when angry or stressed. But there are still problems in paradise, and the heavily armoured police now use flying mecha-suits to stamp out trouble. The most powerful cyborg is Briareos a reconstructed ex-soldier, who has a robotic helmet instead of a face, something Deunan, his lover, still has to deal with.

The first film had many dramatic and visually complex set-pieces, like the holographic recreation of a murder scene. Technically, the film was a conserted effort to use 3D CGI animation to represent people, not with photo-realism, but with a stylised more traditional anime look.

The movie sequel Appleseed: Ex Machina pushes this visual approach further, aiming to give the stylised 3D characters more weight and realism, extensively using motion-capture for action, as well as dialogue (it's far harder to map the movements of the many facial muscles). While more time is spent humanising the performances, apparently less time is spent on the plot. 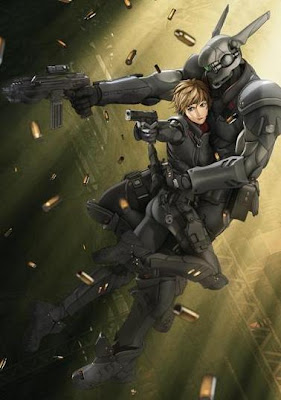 As the various president's of the new world territories meet to unify their communications satellites, cyborg terrorists attack the conference. As the crisis spreads throughout their city, Deunan and Briareos take on a huge new threat to save their fragile future.

The story is too simple, with the characters lagging behind the audience - if only the heavy ops squad were as good at detective work as they were at slow-motion sideways somersaults during gunplay (thanks to co-producer John Woo), a lot of trouble could have been averted.

It's still spectacular, entertaining and represents what can be done in digital cinema using imaginative designwork. The hardware on display looks like it will actually be built one day.

But despite the advances in the animation, I still prefered the more complex first film, where the climax was more impressively large-scale and the story more complex and even philosophical. The totally chaotic action finale is full of those dangers where heroes depend on luck as much as skill.

Also, both films still can't compare to Innocence – Ghost in the Shell 2, which overcame the wide gap between the look of its 2D characters moving around in 3D backgrounds. Appleseed's story isn't as haunting or memorable and it's imagination hasn't been allowed to roam free.
Posted by Mark Hodgson at 10:15 am