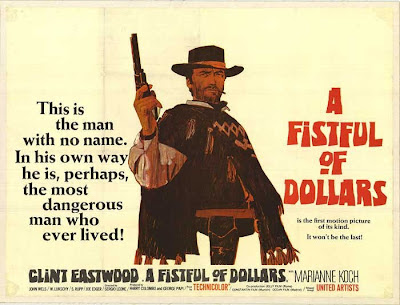 A FISTFUL OF DOLLARS
(1964, Italy/Spain/West Germany, Per un pugno di dollari)
You won't see many Westerns in the Black Hole, but Spaghetti Westerns are a different genre altogether, one that I repeatedly make time for.

I was initially attracted to them for their gritty violence, unique music and Clint Eastwood's persona. The few Westerns directed by Sergio Leone are also laced with dark humour and feature very early examples of ultra-cool anti-heroes. His film-making is also very visual, realistically detailed, and elegantly constructed. Prime examples of pure cinema. Beautifully crafted European cinema, but entertaining rather than arthouse. The Italian perspective on a very American genre is critical, cynical, funny and often far more accurate than many Westerns made in the U.S..

In the seventies, Clint Eastwood movies were always in the cinema and his Westerns were regularly on late night TV. They were visually cropped to fullscreen and crudely censored for violence (mostly in line with cuts made for the cinema releases). But still they contained raw, regular outbursts of violence and a host of unlikeable characters, leaving audiences to side with the devil they knew.

I’ve always been very aware of music in movies, and here I heard for the first time some of the most famous ever movie soundtracks. Composer Ennio Morricone gained worldwide attention with these films and never looked back. After these Westerns, among the earliest jobs in his long, successful and prolific career in film music, are also the first three horror/thrillers directed by Dario Argento. 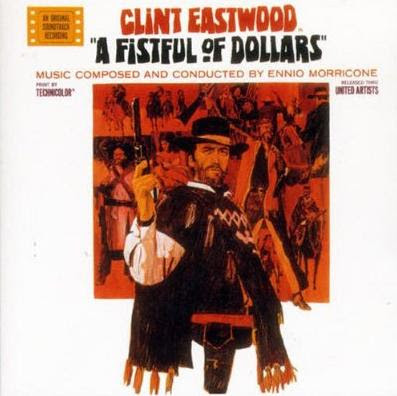 I then didn’t miss any more of Clint Eastwood’s films on TV and in the cinema. Throughout the 1970s, he was usually a reliable indicator of an interesting, hard-edged story. But before the 'Dollars Trilogy' - consisting of A Fistful of Dollars, For a Few Dollars More and The Good, The Bad and The Ugly - Eastwood was only a TV star (as second fiddle on Rawhide) and an occasional bit player in movies (like a comedy lab assistant in Revenge of the Creature). He wasn’t first choice for the Man with No Name, but he was the most famous American star that Leone could afford for his first Western.

I repeatedly saw the film on TV, and only once in the cinema in a Dollars Trilogy all-nighter in the Ewell ABC in 1979. Since then, I’d never seen the film again in widescreen 2.35, and never ever seen it uncut. Finally I've watched the beautifully restored 2003 DVD special edition, and I can honestly recommend the film to even ardent non-Western lovers. It's art, action, cult, Italian, dark, funny, intelligent... 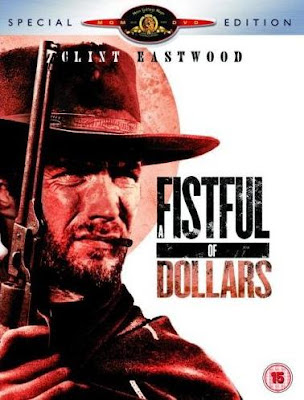 The story is closely based on the 1961 Akira Kurosawa film, Yojimbo (The Bodyguard), where a renegade samurai enters an isolated village to discover two powerful families struggling to monopolise the local trade. Sanjuro, (Toshiro Mifune, also a star of The Seven Samurai), plays one family off against the other as they bid on his superior skills of swordsmanship, trying to break the deadlock and sway the balance of power. Yojimbo doesn't have as complex an approach as Leone's remake, but I did enjoy the unconventionally modern soundtrack. It was shot 2.35 widescreen. Leone went as far as to lift shots, dialogue, as well as story elements for A Fistful of Dollars.

The Man With No Name, played by Clint Eastwood, enters a small village on a mule and sees a woman being held prisoner while her husband is beaten up. They are some of the few villagers left in the middle of a power struggle between the Baxter family and the Rojos. Evenly matched in numbers and firepower, the two sides are attempting to corner the arms trade over the border between Texas and Mexico.

The Stranger soon discovers that there’s money to be made as he pretends to ally himself to one family, while maneuvering them against the other. To successfully encourage them towards mutual destruction, he must avoid suspicion from the dangerous Ramon Rojo, a clever and sadistic rifleman who’s just as fast as the Stranger is with his pistol… 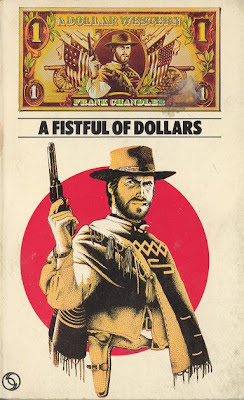 The look and atmosphere of A Fistful of Dollars anticipates 1970s Italian horror. The music uses unsettling noise and chords of sustained intensity. The carefully composed widescreen photography flips between expansive, barren wastelands and unflinching extreme close ups. There’s no time spent on romantic subplots or verbose explanations of inner motives – the characters establish themselves in actions, not words.

The regular gunfights are presented like horror movie killings with terrifying music and messy unheroic deaths in the dirt. There's no traditional fistfight in the saloon, with collapsing furniture and comedy barmen. The only hand-to-hand combat is when Eastwood gets totally outnumbered, tortured, and his face is literally beaten to a pulp until his face is unrecognisable. The baddies kick him when he's down, stamp on his hand and don’t pull their punches. Unable to walk, he can only drag himself away. While there’s little blood, these films were instantly berated for being too violent, as if the West was won by fair and necessary means. The Dollars films predate and foreshadow Sam Peckinpah's gory The Wild Bunch - an astonishing benchmark in onscreen violence.

Snidely called 'Spaghetti Westerns' because of the Italian production crew, the films were mostly shot in Spain. To compensate for not being in the authentic locations, or even the right continent, Leone set the stories close to Mexico's border, but was scrupulous over historical detail, referring to period photographs. Onscreen, clothes look suitably like they've been dragged across the desert on a horse. The buildings and streets look realistically derelict and desolate.

Each of Leone’s subsequent Westerns then progress historically to tell the story of the West at key moments in the birth of America, in increasingly epic films that grew in budget along with their international success. Clint Eastwood's three Spaghetti Westerns quickly turned him from a TV actor into both a movie star and a director. 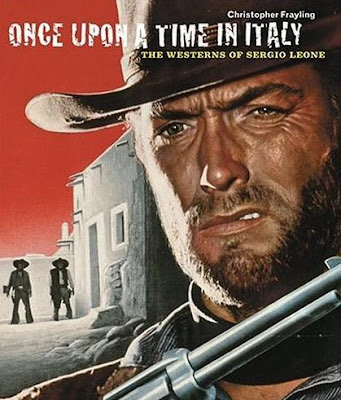 I’ve been watching the 2-disc special editions of the Dollars Trilogy and A Fistful of Dynamite, while reading the informative and photo-packed book, Once Upon A Time In Italy, by Sir Christopher Frayling.

I’ve enjoyed experiencing all my favourite westerns again. Despite the low budget, A Fistful of Dollars is even more exciting and interesting than I’d remembered it.

The two-disc special edition features a pristine restoration – the picture looks brand new, made from the original negative, though the aspect ratio isn't full 2.35 and the compositions looks tight on all sides, inline with most Hollywood DVDs from this film format. This is a shame, particularly with a cinematographer and director who carefully use every part of the frame.

The mono soundtrack has been enhanced into 5.1 stereo, which sounds excellent, though the redirected directional nature of offscreen dialogue is sometimes heavy-handed. The extras are well made and low on padding. Short interesting documentaries, trailers, and commentary. The films can be bought singly or in different Leone boxset collections. 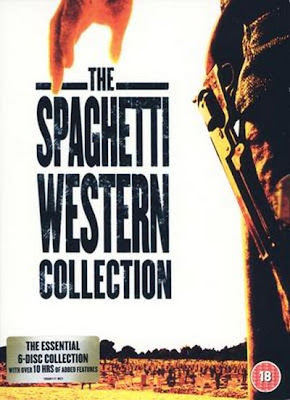 A season of most of Clint Eastwood’s films is running throughout August and September at London’s BFI Southbank, including a national run of The Good, The Bad and The Ugly. A classic film you should see on as large a screen as possible.