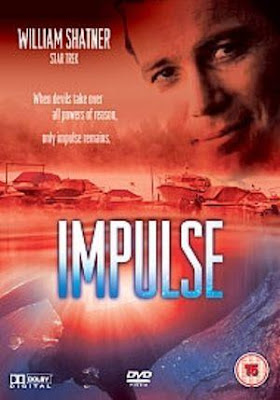 I hoped that I was in for a treat when I read that Shatner made a film playing a psychopath. What I didn't know was that it was drenched in seventies fashion, and co-starred Harold Sakata ('Oddjob' from Goldfinger - but why?).

The film opens disastrously with an extended flashback that's truly terribly acted, as we learn what turns Shatner's character psycho, as a boy. We also see the director's knack for missing key performances, when characters deliver their most dramatic dialogue with their backs turned. This technique becomes invaluable when cutting around Harold Sakata's performance, even though most of his dialogue is 'yeah, yeah!' 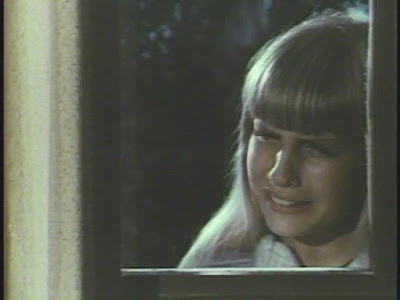 Tina sees her mother in bed with William Shatner
Actually, after the opening scene, the acting gets better... ever so slightly. Admittedly Jennifer Bishop, playing Shatner's next victim, and Ruth Roman, as the busybody friend, are very good. Even the-child-who-knows-he's-evil-but-no-one-believes-her (Kim Nicholas) has her moments. But I think this is a case of experienced actors directing themselves. If anyone goes over the top (I'm mentioning no names), the director isn't there to rein them back in... 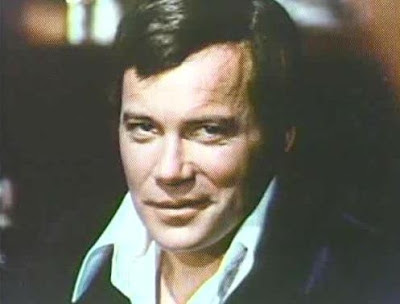 How to look lecherously at bellydancers
We are thusly treated to a classic Shatner acting class in lechery (pictured), happiness (of Naked Gun romantic-montage proportions), anger (beyond anything in Star Trek), and nervous desperation... perhaps what we're seeing isn't acting, because he thinks his career is nearly over? Not realising that five seasons of T.J. Hooker are just around the corner?

It's also a rare chance to see Shatner as a villain. The plot? I almost forgot - he's playing a murderous gigolo. He hustles rich women for money, then kills them when he's rejected. But as he homes in on his next victim, he doesn't realise he's already met her daughter, who has seen that he's a very bad man. But will anyone believe her? 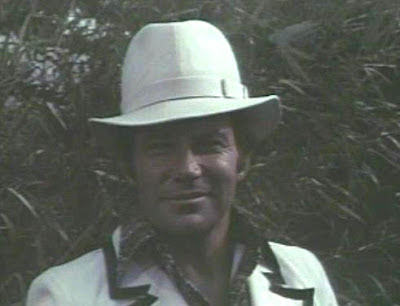 All this, topped off with his nylon patterned shirts, stripey tank tops, bell-bottomed corduroys and the baddest hat... I think filming in Florida in the seventies could be the perfect storm for a fashion disaster. 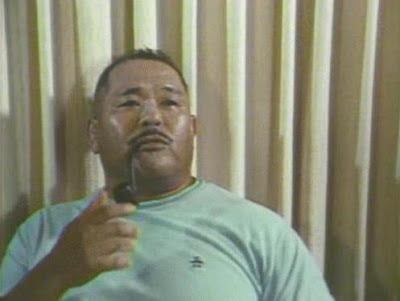 "Yes, that was me beating up James Bond in Goldfinger"

With acting fireworks in every simple scene, there's plenty to enjoy - but if you wanted action, you ain't got it. The slow motion chase scene (it's not filmed in slow motion, it's just slow) through a car wash is staged for no real reason at all, except that they could. Realism and continuity fly out of the window as Shatner runs over the wrestler without the car so much as bouncing... three times! In truth he'd need a steep ramp, and one of those Dukes of Hazzard leaps, to be able to clear Harold's substantial figure even once.

Looking at his resume, director William Grefe appears to have a penchant for filming sharks and directing shark movies, which probably explains the best shot in the movie - a car crashing into a river, all seen in a continuous take from inside the car.

Yes, it's a bad movie, but one of the enjoyable ones. It's beyond cheap - check out the dark blue sheet hanging outside Tina's bedroom window, to represent night time! This looks even cheaper than the TV movies that Shatner was doing inbetween Star Trek, the original series, and Star Trek - The Motion Picture. Perhaps he was trying to break out of TV movies, and back into movie movies. Way to go, Bill! Good choice!

But, talk about no frills, this DVD doesn't even have any artwork printed on the disc! A white disc with a little writing on? What is this? Bootleg chic? Rather than 'dumping' the title out there, this could sell far better with even a little presentation. The cover art makes it look like a documentary about Mars, and subtitling Shatner with 'Star Trek' in tiny words looks as ludicrous as it is redundant.

The lip synch on the DVD is a little loose in places, that I'll generously assume weren't there originally. There's even some creasy tape faults, though I can't think what the response would be if we suggested that this gem should be digitally remastered.

Still, I'm very glad that it's cheap and it's out there - I'll proudly put this on my Shatner shelf, right next to Incubus - the world's only movie in Esperanto...


Do you want to see more?

1977 - KINGDOM OF THE SPIDERS (Shatner vs a spider invasion)

1972 - THE HOUND OF THE BASKERVILLES (Shatner meets Sherlock)

...all of which are ripe for Black Hole Reviews - watch this (outer) space...