EARTHQUAKE (1974) my early taste of bad-taste 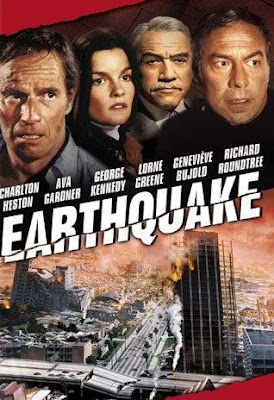 Imagine L.A. being wiped out by a series of devastating earthquakes. Famous buildings, skyscrapers, shopping malls are all disintegrating into piles of bricks. The dam to the Hollywood Reservoir, poised high in the hills, looks like it's going to break. Charlton Heston is rushing around trying to save his wife... and his girlfriend. You're watching all this in a cinema, and during the quakes, your seat is actually shaking...


Besides big-budget disaster movies, Hollywood also tried to woo punters away from the TV with this realistic gimmick. Sensurround involved temporarily installing huge low-frequency speakers into cinemas, to kick in with rumbling that felt like the whole place was shaking during the appropriate action onscreen. (I remember seeing a big black four-feet cube sitting ominously at the back of the cinema). But afer a few years, the system was no longer used, accused of actually damaging the fabric of the cinema buildings! A ton of technical details and a history of the format is here on 70mm.com.

Being a sedentary thrill-seeker, I caught two other Sensurround releases around at the time - Rollercoaster and Battlestar Galactica, (the first three tv episodes were cut down, beefed up and released as the first of several movie releases outside of the US). I missed The Battle of Midway (also starring Charlton Heston) and don't know of any other films that used the short-lived process.

The recent DVD region 1 release even has the Sensurround mix on it, as well as a 5.1 option. Through a home cinema set-up, I was able to experience the ground-shaking all over again.

But even without the fear of your lounge collapsing, the film still entertains in a variety of ways. It's less serious than The Poseidon Adventure, less grim than The Towering Inferno, and delivers action in huge chunks, without worrying about characters or, well, taste. It's the disaster film most suitable to be turned into a fairground attraction, which it was at Universal Studios theme parks.

Writers George Fox and Mario Puzo (yes, Mario Puzo! - halfway between writing The Godfather and Superman - The Movie) were determined to wring the maximum potential out of every suspenseful quake-related situation. Cracks in the earth, buildings caving in, getting trapped in lifts. The scene where the water is snaking towards the powerlines had everyone lifting their feet off the floor... People getting hit by falling glass, pans of boiling water, girders... every conceivable quake injury is presented as a thrill-packed stunt show. It's very Hollywood, and not at all like real quake footage. But at the time, the experience wasn't sullied by conscience, except occasionally when the film-makers overstepped the mark...

Like the plummeting lift, packed with office workers - as it hits the bottom of the shaft, we get a knee-level shot of their legs... and special effects blood zaps into the screen. Outside, a woman is hit by shattered windows, she turns to face the camera and has shards of glass poking out of her face. It's like a cheesy horror movie, so fake, it passed the censors. Even at the age of 15, I knew that it was tasteless, but was fascinated nevertheless. 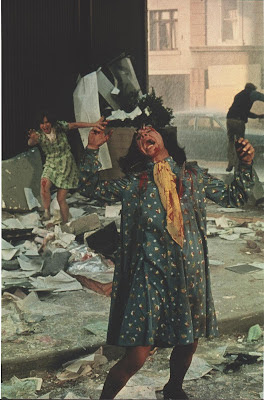 Nowadays it's harder to work out what the hell they were thinking - two characters appear for the first time in the movie, one get's injured, the other yells 'Mother', and we never see them again. Are we supposed to care? Is five seconds enough time to build an emotional bond with them? It's a key moment in understanding the mentality of seventies disaster movies. Crass, high bodycount, spectacular deaths, unequalled by Freddie or Jason combined. I think the phenomenon peaked with 'the pylon through the stomach' in The Cassandra Crossing. A character who only appears in one spectacular shot in the middle of a train crash.

Today, disaster movies keep a distance from death scenes, or even cut away completely. Victims are usually computer-generated specks, and only the key characters (usually bullies or baddies) get a close-up demise. (I'm thinking Poseidon, here). So death scenes are only allowed as part of the story. Random acts of movie violence for entertainment, are no longer. Pets, pensioners and children are safe again in action films.

Spare also a thought for the stunt performers back then - no digital wire removal for them! If it goes wrong, it's not 'fixed in post', they had to do it again! The highfall in Earthquake, shot straight downwards, an angle stolen from The Poseidon Adventure, looks dangerous, as stunts should. As does the motorbike stunt - a loop-the-loop that goes wrong. And it looks like it really did go wrong, and they left it in. 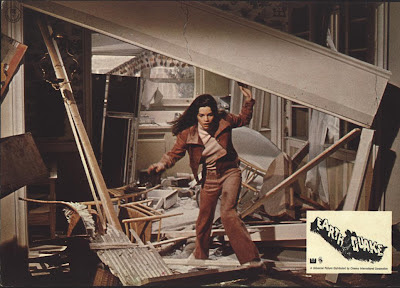 Even before the quakes hit off, the overacting is just as spectacular. Ava Gardner continuously shouting at Charlton Heston would send anyone into the arms of Genevieve Bujold. Marjoe Gortner barely convinces anyone that he's a sane gorcery clerk, before he goes psychotic when Martial Law is declared. Victoria Principle is quite good, but with her afro wig, she just looks over the top.

Richard Roundtree has nothing much to do. It's sad to see him demoted way down the cast list. His iconic run as the superbad Shaft had expired after three films and a quickly-cancelled tv show. He had a few more leading tough guy roles, like Diamonds, and Escape to Athena, before settling down to a long-running career in bit parts as cops and commissioners.

I won't tell you the story, you know it's not important. The idea is to introduce dozens of characters, lining bottles up on a wall, with silly fast-moving soapy plots. The bottles are then knocked off the wall. 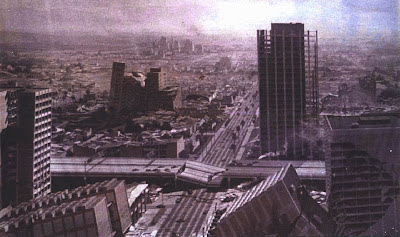 Some dodgy optical special effects are weighed up against some spectacular large-scale model work. The wide shots of mayhem are done with matte paintings overlaid with optical fires and smokes, but only some of these stand up today.

At the time it was a huge and expensive undertaking. Quake movies had previously only provided centrepieces or climaxes to films set around famous disasters, notably San Francisco (1940) which had a short but spectacular recreation of 'the big one'. Earthquake did its best to deliver one long disaster, to follow up The Poseidon Adventure. It then took two movie studios to team up to follow it up and beat it for scale… The Towering Inferno…

There were a couple of different versions of Earthquake. It was padded out with extra scenes specially made for TV, in order to pad it out to three TV hours. These mainly involved a plane waiting to land at LAX despite the damage to the runways.

There's a fantastic fansite, devoted to the film, with photos and details about the special effects, missing scenes, and loads more... here at EarthquakeMovie. The only other source of behind-the-scenes info was an early 'making of' book, published at the time. A slim 128 pages long, half of it is devoted to telling the story of the film! 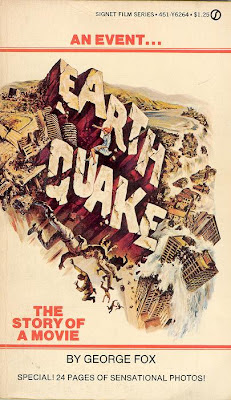 The film is long enough at 123 minutes, but obviously the TV scenes would be a good extra for completists. As would a trailer or a documentary. But a widescreen presentation with Sensurround is what really matters, despite the no-frills. 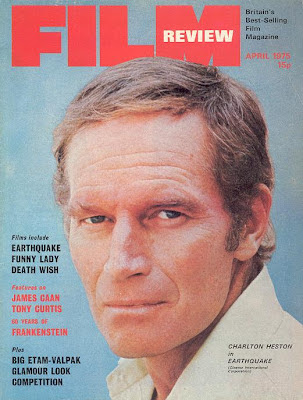 I remember watching Earthquake in an early multiplex in the UK. My mother was next door watching The Great Gatsby, and said that she could hear the quakes through the walls of the cinema. OK, Sensurround wasn't without it's major faults...