KAKURENBO - HIDE AND SEEK (2005) worth hunting down 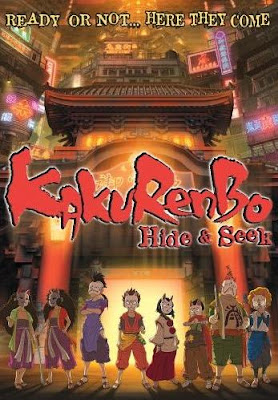 This has been out awhile and has already had a DVD release in the US. It's a one-off, stand-alone short film, nearly 30 minutes long, and looks almost entirely computer-generated. But the animation is part of a new look in Japan to make anime three-dimensional, while retaining the traditional look of anime characters.

This method was also used for the stars of the first Appleseed movie - they're not photo-realistic computer recreations of humans (like in Final Fantasy - The Spirits Within), but rather anime characters given an extra dimension. This avoids the sometimes uncomfortable clash of styles between 2D characters running around three-dimensional sets or vehicles. The style of animation is far more intensive, but I'm sure we'll be seeing much more of it.

The story is about a group of children playing a variation of 'hide and seek' in an abandoned wooden town (that looks more Chinese). Abandoned that is, except for some rather unusual demons... 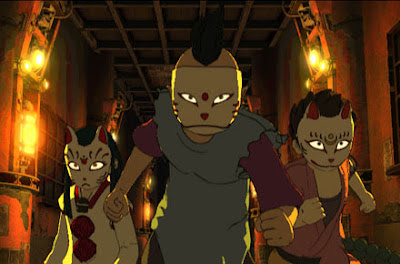 The children all wear fox-masks as part of the game, so we never get to see their faces. This, and the unfamiliar architecture of the town give the film several levels of mystery, which also make it very repeatable. We know one child is looking for his sister, who disappeared here playing the game, but what's in it for everyone else? What do the demons want? Where are we? When are we? We only get some of the answers in this fascinating, frightening and colourful animation. 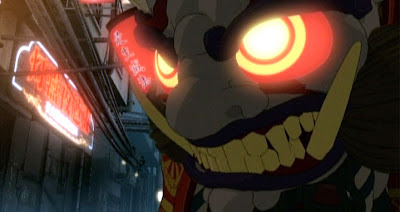 Although the film is under half an hour, the DVD also has an in-depth split-screen commentary showing the storyboard and rough 3D animation side-by-side. There's also frank and enlightening interviews with the director and designer about the development of the project, and a look at how the film was received in its early screenings.

For a better look at the characters, plus wallpapers and trailers, see the official US Kakurenbo website here ...