DOC SAVAGE: MAN OF BRONZE
(1975, USA)
Pulp fiction action hero who had a Fortress of Solitude before Superman!
No, I'm not old enough to have gotten into Doc Savage in 1933, when he first appeared on newstands in the pages of pulp fiction. I caught up with him when his exploits were reprinted in the 1970's, with tremendous new cover artwork that leapt off the shelves. The success of these books span into a movie in 1975, Doc Savage - The Man of Bronze. Written under the collective pen-name Kenneth Robeson, Lester Dent was the actual name of the main writer of these monthly stories, published in Doc Savage magazine, when pulp was in its heyday. The stories were set modern day, and when the Second World War broke out, Doc joined in the fray in his adventures.

The science was slightly futuristic, which makes the stories even more interesting today - a reflection of what was thought to be almost possible. Generally the mysteries that drove the stories often appeared to be supernatural, but usually turned out to be man-made (like Scooby Doo!). But occasionally Doc would battle the fantastic, like in 'The Land of Terror' where he fights for survival on an island filled with living dinosaurs. Luckily, very little of the text was updated when the stories were reprinted in paperbacks by Bantam in the 1970's. The new, vibrantly colourful artwork helped the series keep on selling, so that all of the stories were eventually available again, as well as a Doc Savage comic and a 'biography' ('An Apocalyptic Life' by Philip Jose Farmer). I'm still working my way through all of them - some of the only fiction I enjoy reading.
In 1975, a movie seemed like a good idea, especially with sci-fi king George Pal producing. Pal was the creative genius behind the early colour sci-fi classics The War of the Worlds (1953), The Time Machine (1960), Destination Moon (1950), When Worlds Collide (1951), all of which are definitely worth seeking out, for their superb special effects alone.

(When Stanley Kubrick was making 2001 - A Space Odyssey, Pal's 1950's sci-fi films were among the few that he could reference that had already tried to depict realistic space travel with a big budget.)

After classic movies like those, Doc Savage - Man of Bronze fell short of expectations, but Pal had reputedly bought the rights to all Doc's stories (over 180), obviously thinking he had a franchise on his hands. Fantastic idea, worth a try, but it was not to be. Although the film ends with a tease for the title of the next film Arch-Enemy of Evil (a la James Bond), Doc has never appeared onscreen again.
Although it's tongue-in-cheek, sending up Doc's ultra-brainy, ultra-macho exploits, is not as funny as sixties Batman, and not nearly as exciting as Raiders of the Lost Ark, that followed in the same genre only four years later. The cast certainly look the part, but there are no real stars. Ron Ely was famous at the time as TV's Tarzan. The production values are okay, but it still looks like a TV movie. The director is Michael Anderson, the year before he made the popular Logan's Run movie. George Pal wrote the script. It's fun, but...

At the time, before Indiana Jones, the Superman movies, and even Flash Gordon, Hollywood was still trying to get any adaption of a comic book to work. Batman on TV (1966) was the exception, but was almost pure comedy. There was a struggle to get Wonder Woman to work as a TV series, which had had several false starts. The most successful run, the second season (set modern day), began in 1976. In fact, Doc Savage feels a lot like the first season of Wonder Woman, which was set during WWII, and was also unsure if it should send itself up, or how.

The film snuck out into cinemas (I saw it on a double-bill with the Belmondo spy spoof How To Ruin The Reputation of the World's Geatest Secret Agent), but wasn't a success, but also never went away. At the time, I was disappointed that Ron Ely didn't look like the cover art of the paperbacks, where Doc has a crewcut that looks like a bronze skullcap (as described in the stories). What I hadn't seen then, was the pulp artwork where Doc has ordinary, contemporary hair. The film is set in 1936, a brave move, but undoubtedly the right choice, though the look isn't emphatically 1930's enough - for instance, some of the hairstyles look decidely 1970's.

The story opens with a brief intro, set in Doc's Fortress of Solitude in the Arctic (Superman wasn't the first), though the books depict it as a little larger than the tiny igloo shown here. The action moves to Manhattan, with an attempt on Doc's life in his stupendous skyscraper penthouse. A strangely painted figure (played by legendary stuntman, Dar Robinson) triggers the mystery of who killed Doc's father, sending the gang deep into the dangerous South American jungle. 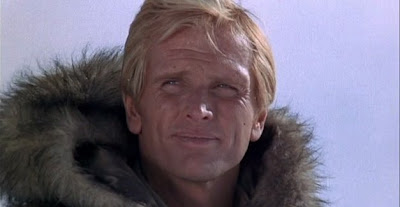 Doc is assisted by the Famous Five, friends and scientists, all experts in different fields, who are also handy in a fight. The actors are well cast to resemble their characters, but only Renny (William Lucking) and Doc play the roles straight.

The booming OTT voiceovers and ridiculously patriotic music (with male-voice choir), try to veer the project more into comedy. Was that a late decision, during post-production? Admittedly the (special effects) glint in his eye is fun, but over-used.The atmosphere is suitably dark and the story is moving along nicely until the baddie arrives, with a troupe of silly comedy sidekicks. These characters aren't in the original story. Doc's baddies should be menacing, or at least look capable of outwitting him.

Strangely, someone who looks like a great baddie is Michael Berryman, who has a bit-part here, just before he became the pin-up poster-boy of the original The Hills Have Eyes (1977) and his career as a horror icon began.Also way down the cast is a very meek Pamela Hensley, before she stormed the screens as the super-sexy Princess Ardala, a recurring villain in TV's Buck Rogers (1979). 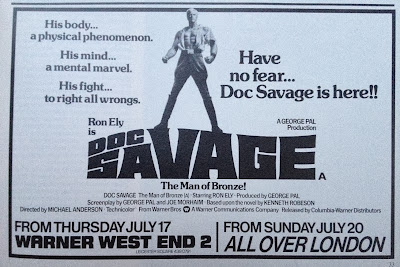 The mysteries driving the story slowly evaporate, like the flying green, poisonous snakes, which look like the only viable threat to stop our heroes. At the time, Doc Savage - Man of Bronze was amusing enough, and still is. The script is reverent enough but lacks the dark, desperate race against time written into the original plots.

For fans of the books, it's worth seeing if only to try and work out what might have been. I'd rather see this hero taken seriously, but obviously Indiana Jones has now stolen his thunder. Sky Captain and the World of Tomorrow is another example of getting the right balance between thrills and chuckles in this genre. 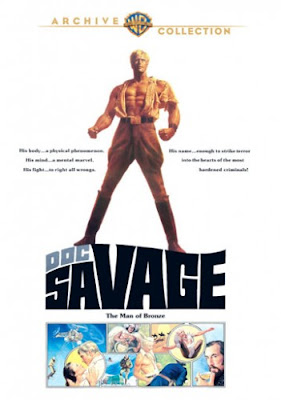 UPDATE - April 2009!
Warner Bros. Online Store has released the movie in widescreen - available online in the US.

Selected stories are being reprinted in double volumes, using the original artwork on the covers (see below), on sale here... 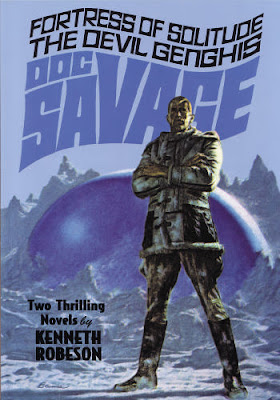 Altus Press are even continuing with brand new stories of Doc Savage... 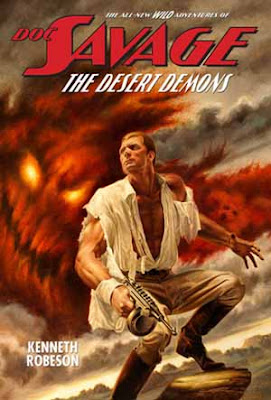