THE EARTH DIES SCREAMING (1965) a very English invasion from space 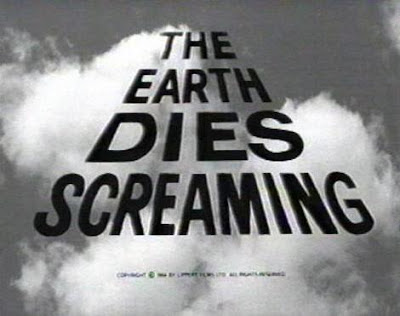 British space invaders - a view from the bar

NEWS UPDATE Sept 2007 - The Earth Dies Screaming is now on Region 1 DVD!!!
OK, so the title is waaaay over the top, but in the opening moments the Earth really dies! We see the English countryside littered with dead bodies. A few survivors gang up in a small village but soon discover the carnage is the work of aliens. Two humanoids in spacesuits stride into sight, they have no faces and they kill with a simple touch... 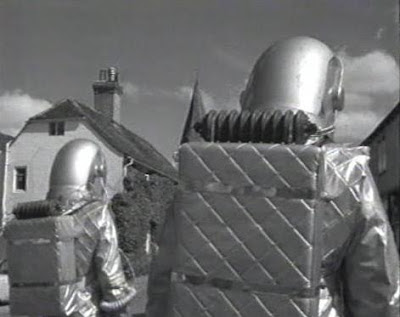 This is from Terence Fisher, the director responsible for the world's first colour adaptions of Frankenstein, Dracula, Werewolf and The Mummy - that is Hammer Films' Curse of Frankenstein (1957), Dracula (1958), The Mummy (1959) and Curse of the Werewolf (1961). What happened next, I don't know, but he made this black & white supporting feature (it runs barely sixty minutes long) outside of Hammer studios!

For the rest of the sixties, besides directing sequels to his classic fifties Hammers, he made a trilogy of low-budget apocalypse movies - I've looked at Island of Terror briefly already, he also made Night of the Big Heat. In all three, the last stragglers of humanity hole up in a pub! If it's the end of the world, you're obviously gonna need a stiff drink.

In the opening sequence, it looks like a couple of shots have been nicked from Village of the Damned (a plane falling out of the sky, and a car crashing) - in what looks like a very similar starting point as that story. 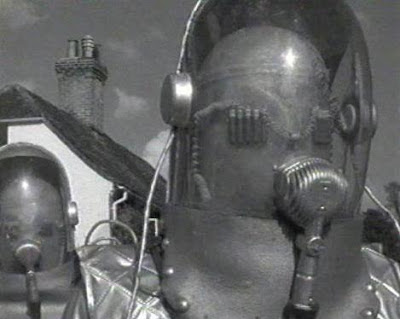 Effectively shot, Fisher wrings suspense out of the barest bones of the storyline, and builds an atmospheric scenario in a very short time. The cast give their straight-faced best and the minimal effects look good enough. In one scene, the eerie framing of an unseen alien watching a young woman through a netted window, is surprisingly creepy.

There's the walking dead too! The story could easily be a prototype for Night of the Comet (1984). There's even a zombie betraying its living friends, in a plot twist seen again in George Romero's Dawn of the Dead (1978).

As was typical for British movies, there's an American actor in the lead, Willard Parker, with his wife Virginia Field as his co-star. There's stalwart support from a slippery Dennis Price, halfway through his film career, between Kind Hearts and Coronets and, ahem, Horror Hospital. A panicky Thorley Walters (Frankenstein Created Woman) can't be relied on in a squeeze and hits the bottle - one of the problems of a hiding in a pub. 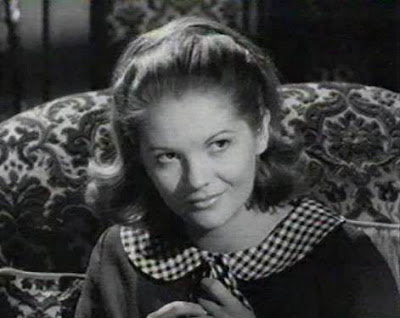 Halfway down the short cast list, is a young Anna Palk in an early role as an expectant mum, seven years before her stay in the Tower of Evil. She also went on to meet The Frozen Dead and The Nightcomers (Marlon Brando and Stephanie Beacham in Michael Winner's version of The Turn of the Screw)!!!

The delicate soundtrack doubles the effectiveness of the piece, composed by Elizabeth Lutyens. It's a pity she didn't make more movie music - her work on Dr Terror's House of Horrors was a classic score. It was never released as a soundtrack.

The Earth Dies Screaming will soon be on DVD, in September. When it airs on TV, the standard 1.33 framing (seen in the above frame grabs) is much too tight at the sides, cropping out characters from group shots while they're still talking! A 1.66 (at least) or 1.85 aspect ratio is what I'm expecting (please). Update 5/10/07 - Tim Lucas has posted a widescreen DVD screengrab for you to compare the above TVgrab of the two spacemen, here on his Video Watchblog.

Someone's posted the whole film in chunks on YouTube, catch it while it's still there. But personally, I don't think I could watch a film this way and hope to get into it. 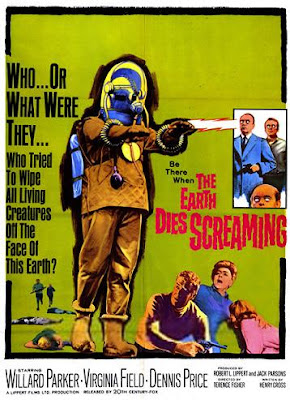