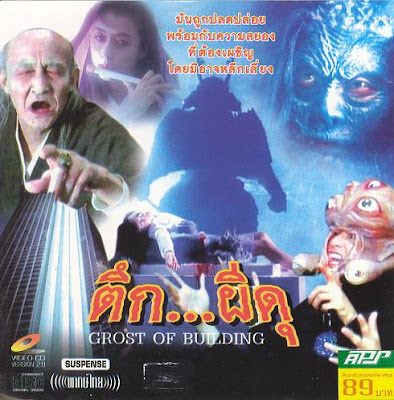 YOKAI TENGOKU - GHOST HERO
(1990, Japan)
Reviewed on a Thai PAL VCD titled 'Ghost of Building'
VideoCD - a key to the past
Still a successful format, and getting new releases alongside DVD, VCDs are ever-present in the shops of Thailand. This format preceded DVD, and can only hold 70 minutes of video per disc (movies have to be spread over 2 discs). It can only hold stereo audio (or dual mono, like for alternate languages) and subtitles can only be burnt in.

But the extensive array of titles from India, Hong Kong and Japan include older releases that aren’t available anywhere else. So start digging! (Not much older stuff is available online though.)

I found a fantastic, eighties superhero yarn from Hong Kong under the title Flying Centipede in the Sky, the ultra-rare North Korean monster movie Pulgasari (reviewing soon) and this bonkers action ghost comedy from Japan. Dubbed into Thai, I've done my best to follow the plot - but it was still a lot of fun. 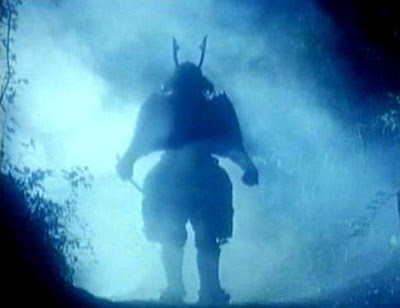 'Ghost Of Building'
I eventually deduced that 'Ghost of Building' (the only English on the cover) was in fact the Japanese movie Yokai Tengoku - Ghost Hero, not easily available on DVD, (maybe here?). I now can't wait for a subtitled release.

Like a story from Gegege No Kitarou, a skyscraper is built over an old Japanese graveyard, with spooky and violent results. The gleaming new building is owned by a scheming, corrupt businessman and houses a high-tech research facility experimenting with holographic gaming (the Japanese, they're just decades ahead of everyone else). It all looks a little bit inspired by Tron and Star Wars, on the cheap. 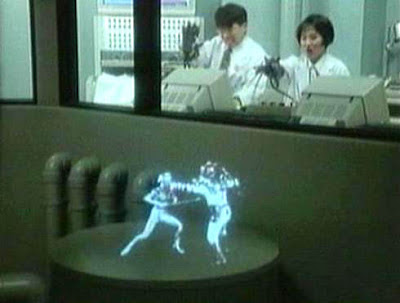 Our hero is a good yuppie, haunted by an electro/punk (gothic, voguing) band who are really a gang of yokai - the guitarist is in fact a racoon, the lead singer a ghostly reaper, and there's a rokurokobi in there too (snake-necked girl). 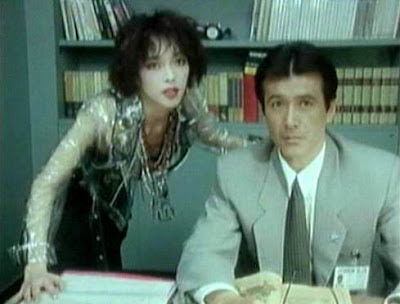 Eventually, a really evil baddie arrives (we know he's bad, he kicks a cute little dog as soon as he gets out of his car), in league with the owner of the skyscraper, and he somehow reincarnates as a samurai zombie who rampages through the place, on a killing spree. Can he be stopped? 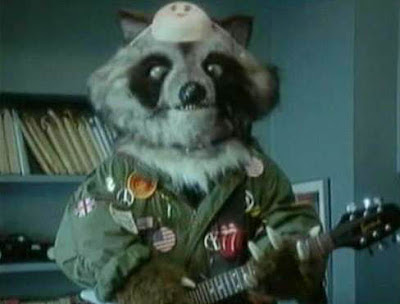 It's an uneasy mix of (pratfall) comedy and horror, veering into sci-fi for the finale, which plays something like The Terminator meets Poltergeist 3! 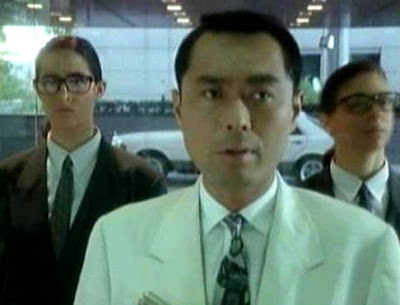 The star is undoubtedly Masato Ibu (also the baddie in the first Sukeban Deka movie, and recently in Azumi) who enjoyably overplays his evilness. The rest of the cast act like they're in a children's comedy, an approach at odds with the brief nudity and blood-letting mayhem. It's safe to say that the acting isn't hampered by restraint.

Action-packed madness, a glimpse at pre-Ring Japanese horror, a clutch of yokai monsters, all in a movie still in the clutches of 1980's fashions and music. It's like Night of the Comet on acid! Hopefully, one day, I'll see a subtitled version and find out what it was actually about.