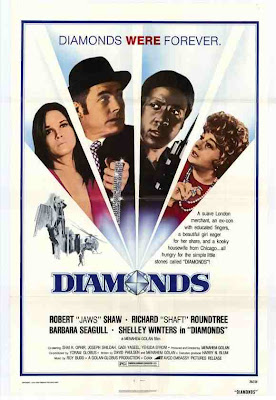 This has so little love on IMDB that I've simply got to write it up, it was entertaining enough back in the seventies, and an enjoyable double-bill with Russian Roulette, which has actually aged far better. Ironically Diamonds has made it to DVD, while Russian Roulette hasn't.

This is the sort of mid-range production that Robert Shaw appeared in, even after excellent work in high-profile American hits as The Taking of Pelham One Two Three (1974) and The Sting (1973). Both had failed to make him a megastar before he lucked into his next role: shark-killer Quint in Steven Spielberg's Jaws propelled him into A-list titles until his untimely death in 1978. He dominated young whippersnapper Nick Nolte in The Deep (author Peter Benchley's follow-up to Jaws), Harrison Ford in Force 10 From Navarone, and battled terrorists in the audacious Black Sunday. But Shaw's most famous role after Quint, is the stone killer 'Red' Grant in From Russia With Love (1963), outwitting the famous James Bond. 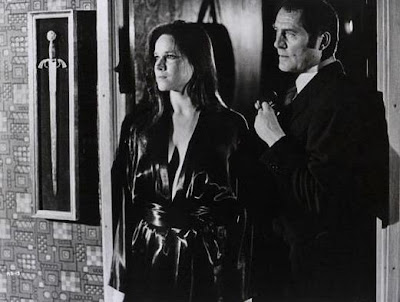 Here Shaw plays identical twins, thanks to some very basic split-screen trickery and a rather lumpy wig. One is a successful diamond merchant, the other a manufacturer of uncrackable security systems. Can you see where this is going? The wigless, diamond merchant Shaw hires two young criminals to help him crack his younger brother's most impenetrable safe - in the Tel Aviv Diamond Centre tower...

As the three arrive in Israel, the police are already alert to the fact that an ex-con is in their midst. Unable to shake police surveillance, they have to change the plans quickly and drastically. Plans that will involve national treasure, Mission Impossible tactics and of course a helicopter...

For decades, no heist movie has been able to resist the temptation to include pressure-sensitive floors. At least here we haven't got the cliched light beams as well. It's all gentle afternoon fun with a few minor twists that you'll never second guess. 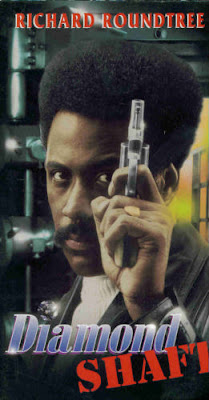 The cast is constantly enlivened by Richard Roundtree (Shaft, Earthquake, and recently Heroes) who's never had nearly enough starring roles. Because of his character's take-no-shit attitude, and maybe his conspicuous shaggy fleece waistcoat and big hat, Diamonds was pushed on VHS as a fourth Shaft movie (retitled Diamond Shaft) which it most certainly isn't. John Shaft would never be caught dead driving an Austin Morris through London!

The third team member is played by Barbara Hershey, so good at baiting Steve Railsback in The Stuntman (1980). Back in 1975 she still appeared under the name Barbara Seagull, which regularly confused me until IMDB arrived. I thought they were different actresses! She is of course mainly the love interest here. 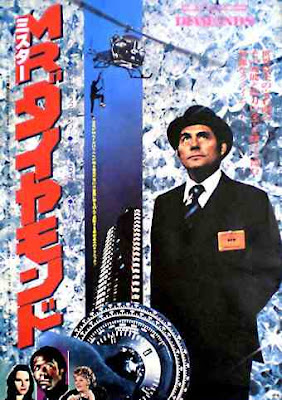 Shelley Winters is prominently featured in publicity and in many scenes, but is almost completely irrelevant to the story, purely along for some tired comedy relief. Though she looks better here than she does in Tentacles or The Poseidon Adventure. Viewers are of course reminded to check out her performance in Night of the Hunter (1955) for proof of her curvaceous appearance and serious acting abilities two decades earlier.

Another impressive aspect of Diamonds is the extensive filming of locations in Israel. I haven't seen Tel Aviv, Jerusalem or Bethlehem (inside the Nativity Church) in any other film. 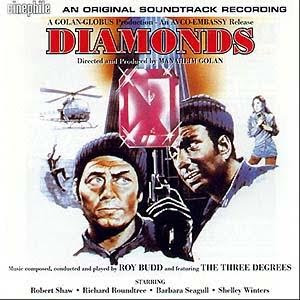 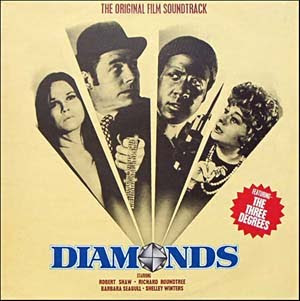 Best of all, Roy Budd (Get Carter) composed a soundtrack that's more memorable than the film. I bought it on cassette at the time and thankfully it was recently remastered on CD. I must have listened to it over a hundred times, even more than Budd's Fear Is The Key. The main theme is very loungey, with bags of sultry, jazzy sax. The car chase theme is a powerhouse, far more exciting than action on the screen. Then there are the Middle Eastern tracks, a memorable fusion of styles for the Israeli locations. Prince Charles favourites The Three Degrees provide an impeccable vocal to the main theme. Maybe you should listen to Diamonds before watching it? 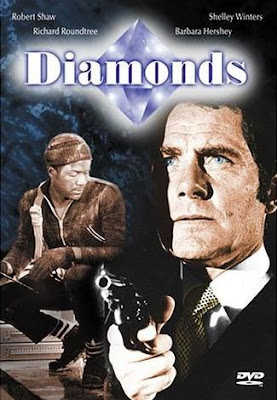 I've not yet tracked down a copy of the anamorphically presented region 1, 2002 Anchor Bay DVD release, but at least it's out there. Maybe I'll stick with the old Channel 5 VHS...

A squeezed, but original, trailer is here on YouTube...
Posted by Mark Hodgson at 11:54 am