THE CASSANDRA CROSSING (1976) - outbreak on a train 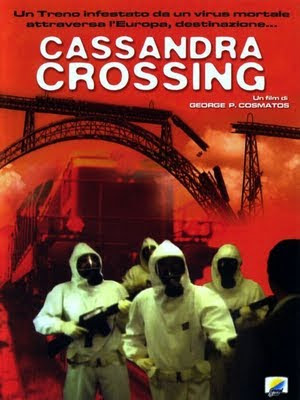 THE CASSANDRA CROSSING
(1976, West Germany, Italy, UK)
This just beat Silver Streak to being the first seventies disaster movie on a train, but the accent here was on suspense and doom, rather than comedy. Back then it certainly delivered, though the posters and publicity made me expect something more sci-fi, like The Andromeda Strain. I re-watched this just before a recent trip to Geneva, where the journey begins. 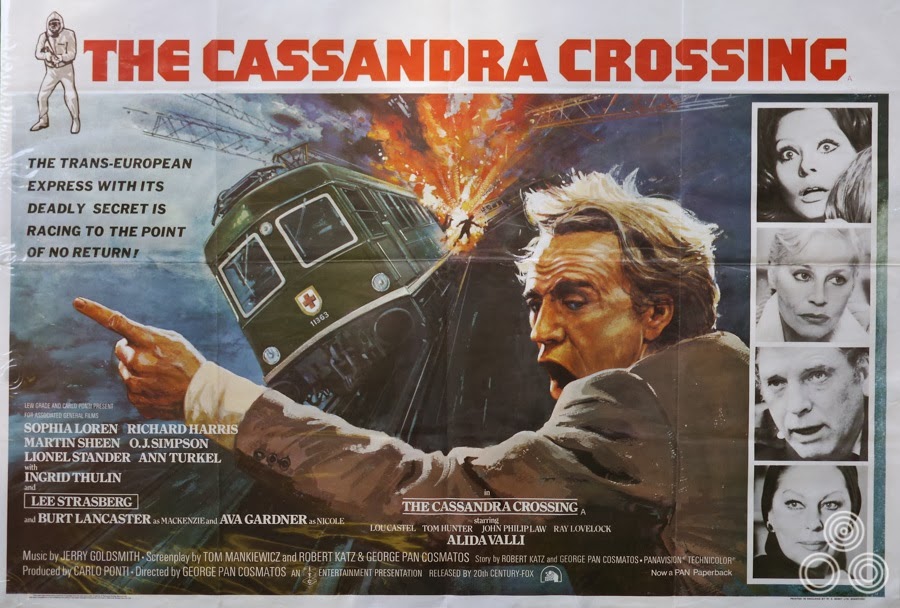 The opening titles lead into a spectacular helicopter shot descending from the clouds, swooping low over Lake Geneva (when the huge fountain was unfortunately switched off), down over the United Nations European Headquarters and up to the World Health Organisation building. Inside, several terrorists force their way into top secret laboratories and during a shoot-out with the guards, one gets splashed with a nasty virus...

This leads neatly to a simple movie premise - hundreds of passengers trapped on a train with a killer virus. Luckily there's an action-hero scientist onboard, his ex-wife and a host of disposal disaster movie stereotypes. There's an early lowpoint with a singsong in one compartment, but after the silly soap-opera interlude, it turns back into a tight thriller as the nightmare deepens. 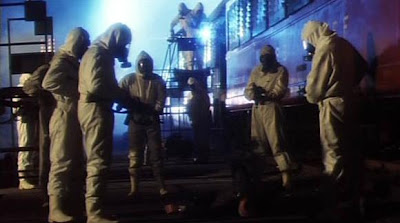 Eventually the American military find out about the missing terrorist potentially infecting everyone on the train. The Colonel in charge orders the train not to stop and that no-one gets off. Just to make sure, the train takes on armed guards and has its windows boarded up, in an eerie nighttime scene with the soldiers dressed in bio-hazard suits. Anyone who tries to escape will be shot. The all-white outfits might be accurate, but they also reminded me of George Romero's own 'outbreak' horror The Crazies (1973). The following year, there was a similar-looking clean-up squad in David Cronenberg's Rabid (1977).

In these contagion movies the symptoms can go two ways - if it's a thriller then the virus simply kills, like The Andromeda Strain (1971) or Outbreak (1995). If it's a horror film then the infected turn into mindless killers, as in The Crazies, Rabid, right upto 28 Days Later. 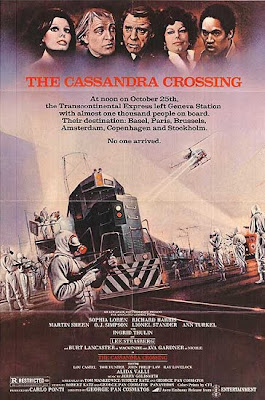 Besides the spreading virus, there's the lengths the army will go to prevent the secret of their bio-weapon getting out. Either way, time is running out for the passengers as the train nears the end of the line, the rickety Cassandra Crossing...

With a simple premise, mounting complications and a memorably callous climax, this is also a movie full of familiar faces. 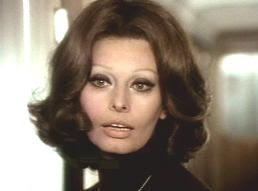 Sharing top-billing are Burt Lancaster, Sophia Loren and Richard Harris, all bringing glamour to an endless string of seventies thrillers. Harris was an unlikely, thoughtful action hero throughout the seventies in Juggernaut, Orca - The Killer Whale and Golden Rendezvous... though today he seems mainly remembered for his curtain-call as Dumbledore. Personally, I'd rather see him battle Orca... 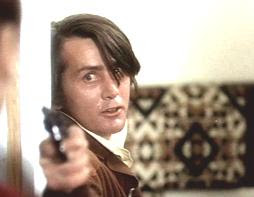 Ava Gardner bounces back from her disaster movie experience of Earthquake (1974), invigorated here by toyboy Martin Sheen, who's still in a rut of greasy villains, looking exactly as he does as the predatory paedo in The Little Girl Who Lives Down The Lane (also 1976). If you ever wanted to see more of Martin doing half-naked yoga, like the opening of Apocalypse Now, this movie is for you...

In the tradition of disaster movies, there's too many characters set up, so that later they can be cruelly cut down... including a host of actors more famous from their European cult movies - John Philip Law (Barbarella), Alida Valli (Suspiria), Ingrid Thulin (Salon Kitty). Not to mention OJ Simpson (The Towering Inferno) as a priest! 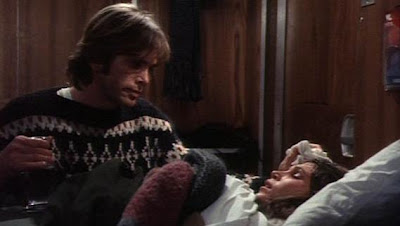 Ann Turkel is presumably here because her husband was Richard Harris. She's paired onscreen with Italian actor Ray Lovelock - yes, the star of Living Dead At The Manchester Morgue (1975), but without his beard! I didn't recognise him without the facial hair, wearing a woolly ski sweater!
Last but not least is the father of method acting, Lee Strasberg. His skimpy watch salesman character gains dramatic weight when he realises that the train is taking him back to the internment camp he was imprisoned in during the war. For a major proponent of stage acting, this is a rare movie role, his most acclaimed screen appearance being in The Godfather. Heaven only knows what made him do a European disaster movie.

The Jerry Goldsmith soundtrack certainly helps. He uses a few creepy virus sounds that he first used for The Satan Bug (1965).

All in all, a fast-paced thriller blended into the disaster movie genre.

I've been watching a VHS all this time and am looking for a decent version on DVD. I've got the Carlton DVD - it's widescreen but letterboxed, non-anamorphic, and the negative needs a little restoration work for dirt and scratches - but at least it's available. I'll keep lhoping for an anamorphic remastered version...