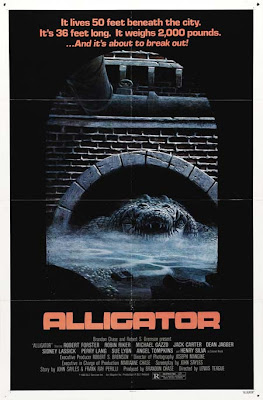 ALLIGATOR
(1980, USA)
Trailing the animal attack genre of the 1970s, witty dialogue, constant action, and great character actors keep Alligator afloat to the very end. Added to this, modest outbursts of gore, building on the bloodier moments of Jaws (1975), makes this latter-day b-movie very watchable for genre fans today. I remember it was a huge hit on VHS. I also miss the days when John Sayles (now a top director) just wrote low-budget and exploitation films. His script for Piranha (1978) also helped elevate it to cult status.

The story builds up the urban myth about alligators breeding in the sewers into an (almost) believable tale about growth hormone experiments gone wrong (like Food of the Gods). The police investigation keeps the film rooted in reality, opening with the discovery of body parts in the sewers. This is all too commonplace in the news nowadays, but felt really unlikely when I saw it back in the day. As the cops find more victims, they eventually realise they have a big problem down under. 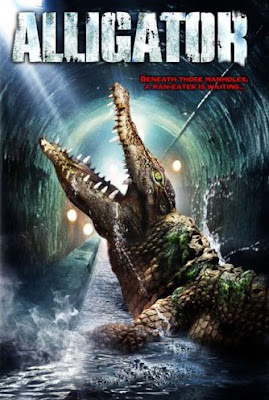 Clever, but low-tech special FX make the most of real alligators in scaled-down sets. But my favourite scenes involve a tremendous-looking full-scale prop, used to crunch on stunt performers and actors alike. There's also some bad-taste use of amputees to show alligator attack aftermaths.

Director Lewis Teague (Cat's Eye, Cujo) follows in Spielberg's footsteps with a marvellous night-time episode in a swimming pool. But full credit to him though for making a Jaws rip-off that actually entertains. Similarly, the story starts by not showing too much too early, while keeping the bodycount steadily rising. The ridiculous car crashes and explosions are slotted in to pump up the trailer - a regular device in the straight-to-video market.

The alternately dramatic/ghastly/humorous tone reminded me of the recent Korean hit The Host, as well as the 'Gnaws' episode of The New Avengers, which also crept around the sewers after some growth hormone had been dumped down there, hmm.

Robert Forster (Jackie Brown, Dragon Wars, The Black Hole) suffers a running joke about going bald, but his hair has magically looked the same ever since. His A-list performance is almost too good for a monster movie, but the rest of the cast also play it straight, to the movie's benefit. I was surprised to see Dean Jagger again, so long after he was the quasi-Quatermass character of X - The Unknown (1956).

Anchor Bay's 16:9 widescreen transfer loses picture information on all sides, compared to the VHS and 4:3 DVD releases, but nothing too important. The big plus is a sharper picture and a welcome commentary track.

For screengrabs and another review, see DVD Active here. For the lousy UK poster that played up the comedy way too much, see Cinema Is Dope here. 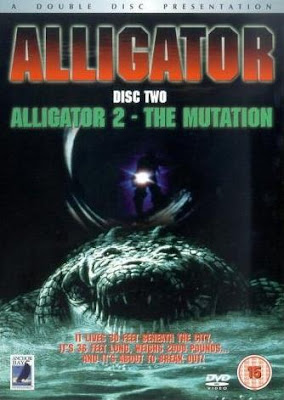 All I can say about the belated sequel Alligator 2: The Mutation (included on the UK set) is that even the trailer is dull, despite having Dee Wallace Stone (The Howling, Cujo, The Frighteners) and Steve Railsback (Helter Skelter, The Stuntman).