The Host and Dragon Wars are both South Korean films, both monster movies. They are however completely different experiences, with vastly alternate methods of gaining international attention.

Downtown Los Angeles under attack from duelling giant monsters and a demon army. Tanks on the streets, chopper chases through the skyscrapers...

Dragon Wars finally landed after years in production, also known under the less catchy title of D-War. It had a huge marketing push in the US, leading to a nationwide 1500 screen opening in cinemas. Is this the way for other non-English speaking countries to make it big in movies?

D-War starts with a confusing flashback/flashforward within a flashback structure to set up the story, an obviously condensed section of narrative. There's an ancient monster trying to find one woman, who has the power to make the giant lizard (that looks like a snake) even more powerful - enough to destroy the world…

There's an impressive early battle scene (one of the few actually shot in South Korea) but the film fails to entertain again until the centrepiece showdown, which is almost as much fun as the climax of Michael Bay's Transformers. Los Angeles gets a thorough trashing as a monster army faces off against the police and the army, while two dragons fight over the girl, chasing her around and up the skyscrapers. The only parts of the film sections that made sense to me were the action scenes, due to the mind-bogglingly bad dialogue and story logic. If it wasn't for the monster scale of the action, this would also look dangerously similar to those Anaconda movies. While the city battle is realistic enough, the effects falter again at the climax, in a low resolution Lord of the Rings fantasy dreamscape, with matching low-res dragons.

I'd have gladly sacrificed the CGI effects budget for the baffling 'monster army' subplot (and its repetitive walk-cycle), in order to finance a better script. If the forces of evil have their own dragon, why do they also need an army?

Besides the US locations are a mostly US cast. Jason Behr (Roswell, The Grudge) chooses one expression and sticks with it for the entire film, though he deserves an award for looking relaxed and happy in front of D-War posters at the publicity junkets. Robert Forster (Alligator, Medium Cool) gets lumbered with a loooong initial stretch of exposition about what Imoogi and Buraki are (don't ask), while hoping a Black Hole will once again swallow him up.

The FX action is the only reason to see this, as the monster wades through some impressively destroyed buildings, while chasing our heros. But strangely, all the CGI shots appear to be severely cropped, top and bottom. The 2.35 letterbox makes the composition of these shots look like mistakes, where the dragons' eyes are repeatedly lost out of the top of the frame, and their bellies running along the ground (crucial for integrating a non-existent object into its surroundings) is often missing from bottom of frame. Though largely shot round Los Angeles, D-War is a South Korean film. Written and directed by Hyung-rae Shim (who graced us with Reptilian, an obvious dry run). The CGI visual effects were all created in a new facility in South Korea.

The film has bent over backwards to get success in the US. It's from a strange cyclical urge for the country to try and make money from giant movie monsters. While D-War is less of a train wreck than earlier Korean quasi-kaiju (see below), it still can't match any average standard of film-making. Nor can it hope to match the quality of the The Host, a far cheaper film, also from South Korea, also hoping for international attention. But D-War is a fascinating demonstration of the furthest extent of compromise in international cinema.

Even with exceptionally poor reviews, Dragon Wars huge marketing push has encouraged so many to see it, that it's far better known and even considered more fun than The Host. This recent unexpected reaction has left me baffled. So expect to see more enjoyably bad big budget movies from other countries, all shot in English. The west generates enough mindless entertainment like this already. I enjoy Korean cinema for the culture, actors I've not seen before, new ideas, new locations... I don’t need more movies shot in L.A., where practically every TV show and movie is shot. They even went to Bronson Canyon, a cliched location for Hollywood even back in the fifties! I honestly thought D-War would at least strike a balance and keep more of it in Korea. The Host succeeded in breaking away from monster movie cliches by focusing on the human characters. Before the beast arrives, we're already involved in the dysfunctional family. It defies the genre by working in drama, humour, political satire, and presenting an overview of life in big city Korea. The Host also features some of Korea's top acting talent. If you want a strong story, actual acting, characters, humour, consistent special effects and even a little subtext, The Host is the only South Korean monster movie on the map.

Either way, fans of both The Host and D-War may soon be rewarded with sequels. The battle continues…

Dragon Wars is out on on DVD and Blu-Ray.

As Japan made an industry out of watchable giant monster movies, South Korea jealously tried to make it's own... Yongary (1967)
The name of Yongary has long been regarded as the worst of the Asian giant monsters... (Black Hole review here). Pulgasari (1985)
...until North Korea came up with this. Kim Song Il kidnapped South Korean director, Sang-ok Shin, to make this tale of a man in a monster suit pretending to be the evils of capitalism. Rarely seen till now, it's best that way. Black Hole review here. 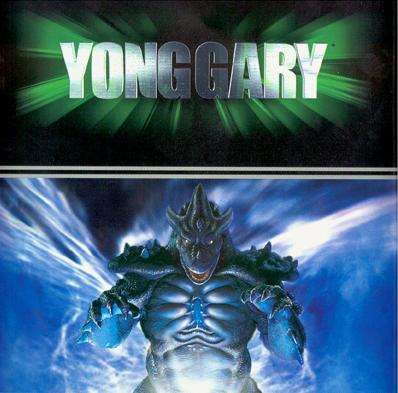 Serious monster fans may have wisely missed Reptilian, reviews certainly recommended them to. The shoddy CGI monster, well-designed but extremely low on resolution, let's down the live-action work, which offers impressive explosions and modelwork that would have integrated nicely with suitmation and not dated as harshly.

The awful story, acting and other details are barely compensated for by the one original scene in the movie - when soldiers attack using flying jetpacks and a rocket launcher!
Posted by Mark Hodgson at 12:30 pm