THUNDERBIRDS on Blu-Ray - looking fine in 16:9 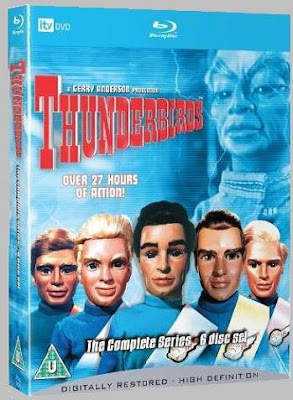 One of my earliest TV memories, or earliest memories actually, was watching Thunderbirds on black and white TV in the 1960s. Another hazy childhood memory was a visit to the cinema and being frightened by a Martian rock snake during the first movie, Thunderbirds Are Go. One of the few survivors from my childhod toybox is a battered die-cast Thunderbird 2. Every week I'd get TV21, a tabloid-sized comic, full of Thunderbirds cartoons strips and impressive colour photos. All in all, Thunderbirds was a large part of my childhood and has survived as an oft-repeated pleasure on TV, VHS and DVD.

I'm still enthralled by the series, after forty years of watching it, and have been collecting books and memorabilia about it and similar shows (like Fireball XL5, Stingray and Captain Scarlet and the Mysterons).

It's no surprise that for Christmas, I was given the new HD boxset of Thunderbirds on Blu-Ray, from ITV DVD (sic). So far, Blu-Ray releases have concentrated on movies and recent TV that were all originally produced in widescreen, perfect for the HD aspect ratio of 16:9. The problem is, that until recent years, all TV shows were made with an aspect of 4:3 (otherwise known as 1.33), presenting a dilemma for Blu-Ray - how should a widescreen format present old 'fullframe' images? Widescreen TVs can of course display the entire original 4:3 image, but only with black strips down both sides. This preserves all of the original image but leaves part of the screen unused. But in a few cases, there's another option... 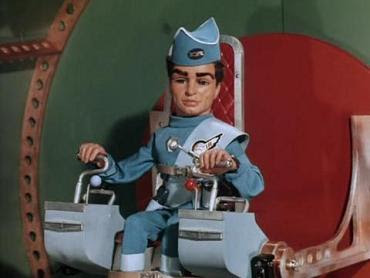 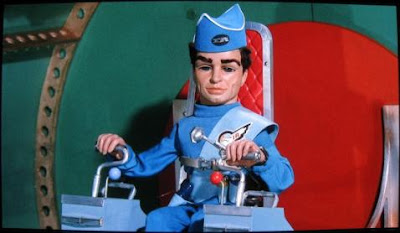 These screengrabs (from an overly heated debate in the DVD Forums) illustrate how ITV DVD have released Thunderbirds on Blu-Ray. By going back to the original film negatives, the image has been re-framed, cropping off the top and bottom edges, but showing more at the sides. This way, the widescreen frame is filled, and the image is undistorted.

OK, part of the image has been cropped off and the visual composition is altered, (usually looking more cramped over each character's 'headroom'), but the advantage here is a slight gain in image (usually down the left hand side) and, importantly, a startling increase in the clarity of the image and the richness of the colours.

Thunderbirds looks like it has had the same treatment as the upcoming Space 1999 HD release. Both series were originally shot on 35mm film, the same format as most feature films. In both transfers, there only seems to be a slight increase in image width.

While FAB (the official Gerry Anderson fan magazine) gave a thorough and largely negative review of the Thunderbirds Blu-Ray boxset, to me it looks far better than I'd been lead to believe. I've not watched the whole set, but the new widescreen framing has been very carefully chosen so as not to miss any action - the lost image at the top of frame even advantageously disguises most of the puppet characters' supporting wires. The high definition transfer is the best we're going to see unless actual film restoration is done. The zooming in and cropping means that owners of widescreen TVs can get closer into the action, the tighter framing feels more like a movie.

The current need to fill up new HD TV channel schedules is probably the reason this series was remastered in HD in the first place, and the requirement would be for a 16:9 transfer, and not a 4:3 one. If fans still want a 4:3 Thunderbirds in High Definition, ITV DVD will have had to pay for a whole new transfer, meaning an even more pricey boxset. Given the choce of high definition Thunderbirds in 16:9 or not at all, I'd definitely vote for 16:9.

This approach for 16:9 remastering, won't work for the hundreds of other TV programmes that were shot on video, or on film formats such as 16mm (a budget-conscious move for 1970s TV meant that pictures suddenly got extremely grainy). Only series filmed (and edited) on 35mm film can benefit from Blu-Ray and HDTV transmissions. Batman, Land of the Giants and The Avengers are all series that spring to mind as being potentially spectacular in HD.

Before I saw Thunderbirds on Blu-Ray, I was a sceptic and a purist. My goal as a collector has always been to collect my favourites in their original aspect ratios, in the best possible quality. With this new home video format offering so much extra storage capacity, I'd ideally like to have the option when such important decisions are made about how a classic series should look and sound. When VHS ruled home video, there was a decade of waiting for movies to be released widescreen. Now the tables are turned, I'm wishing for TV to be released 1.33 full-frame! The only way to keep everyone happy is to offer a choice of aspect ratios - either as a menu option or by two separate releases, but both options are far more expensive to manufacture. High definition transfers, restoration of old materials, and Blu-Ray mastering are all very expensive - and a TV series such as Thunderbirds is 16 times longer than the average movie.

To enjoy something for thirty years and then, at the point where it could be enjoyed at the best quality ever, to have it drastically changed, is frustrating. But like the classic 1950s Ray Harryhausen films currently being presented on Blu-Ray, I've become more open-minded. If it works, it works. Thunderbirds has been carefully converted to work for widescreen presentation and I'm excited to watch it in this new incarnation, especially with the huge leap in picture quality.

Looking around the fan forums, Gerry Anderson's live-action UFO series has also been cropped for HDTV, but the screen grabs here make it look like the most obtrusive reformatting so far - the original compositions only seem to work in 4:3.

The same decisions will be made about many other classic TV shows, as well as vintage cinema (from the 1950s and earlier, roughly speaking). HD or otherwise, new TV sets are all widescreen. Recent movies look good on widescreen sets, but old TV can only fill the frame by being cropped. In most cases it's going to look worse, in terms of quality and composition. Thunderbirds, I think, is a rare exception.

I'll give the series itself a proper review when I've seen some more episodes, again...