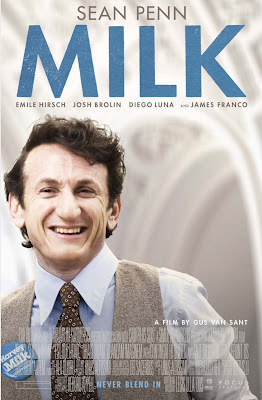 MILK
(2008, USA)
Gus Van Sant's new film opens in UK cinemas this week. I don't normally plug new releases, but this one is exciting for me personally because it's a subject close to my heart - the gay rights movement. Some people may identify their teenage years with The Breakfast Club or some other John Hughes' movie. For others it might be Napoleon Dynamite. Back in the 1970s, I wanted to be someone in Quadrophenia (an anti-establishment punk rebel) or National Lampoon's Animal House, (a drunk but popular under-achiever). But in reality, I was far closer to several characters in Milk, being a closeted teenager at the time, and an out-and-proud politically-involved idealist of a few years later. But this was all in rural England rather than San Francisco, where it was all happening.

For a new audience to the story, Milk should prove an encouraging reminder of grass roots political activism. How the energies of an abused minority can even be diverted from the destruction of rioting and channelled into a positive force. In a time of murderous queerbashing and a hostile police force, it was very easy to get angry or keep very, very closeted.

I like Van Sant as a filmmaker, and when he gets weird and experimental with stories based on real-life, it can be fascinating. His takes on the death of Kurt Cobain (Last Days) and the Columbine High School murders (Elephant) were far from straightforward docu-dramas. But a film about Harvey Milk would be wrong to take such a chance with. 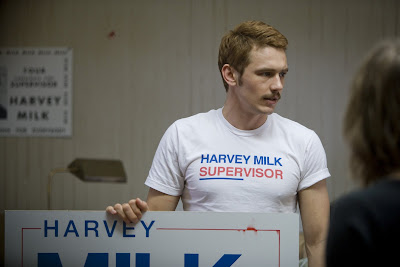 Van Sant tried for years to get this project made. The script by Dustin Lance Black (who's also worked on the Bill Paxton TV series Big Love), and the casting of Sean Penn, finally helped the film to get made. The story is of a gay-rights activist who successfully campaigned his way into San Francisco City Hall in the late 1970s against all the odds. Harvey's story was well-known in the gay press, and later in an Oscar-winning documentary (see below), but I can't imagine many people knowing about it now. So I was surprised when the film pre-empted the story's shock ending right at the start. I'd like to have seen an audience taken surprise by Milk's assassination, with the sense of foreboding building up suspense, rather than just being ironically insightful.

The recreation of the 1970s is as I remembered it, and was scrupulously reconstructed with the help of many who were around at the time. Using the actual locations of Harvey's camera shop on Castro Street, which became his campaign office, and the spectacular City Hall, where much of the story took place, make it all look totally convincing. 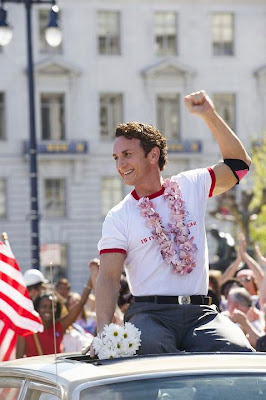 Sean Penn, as Harvey Milk, is an uncanny performance, not only reminding us totally of the person in the news footage, but also channelling his ideals and personality - a dedicated man fired up to make some positive changes - not in it for the money, and balancing the big issues with the plights of individuals. A charismatic speaker and not without a sense of humour. The sort of person who could give politicians a good name. 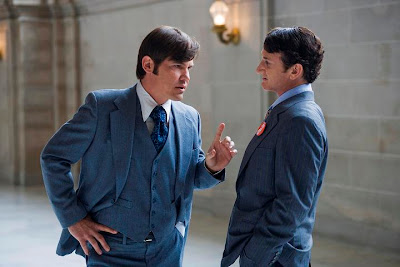 Seeing photos of Penn, Emile Hirsch and Josh Brolin in 1970s clothes and hairstyles makes each of them instantly recognisable compared to the original characters they play (whose photos are included in the end credits).

While gay rights were a hard sell in 1970s USA, things were about to get disastrously tougher. We really needed Harvey inside City Hall in California in the AIDS-blighted 1980s, making his death all the more tragic and untimely. 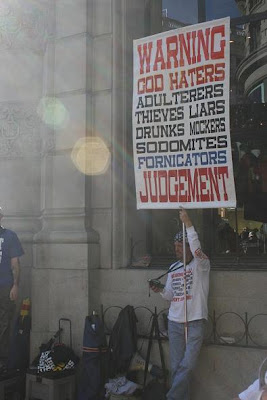 For a while, I thought he'd opened the doors to a more accepting government and society, and that things could only get better. But the long-established gay community of San Francisco still has a vocal anti-gay presence. On our last fleeting visit in 2007, we witnessed an impromptu sidewalk demonstration by vocal Christian moralists on a high-profile street corner in central San Francisco (see photo). Proof that once a battle is won, the fight is far from over. 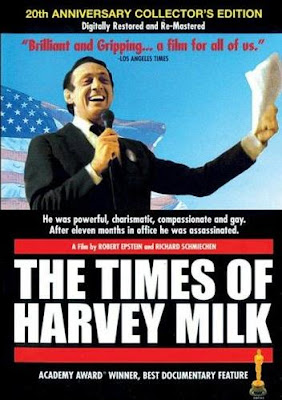 Timed to coincide with the UK cinema release is the welcome return of the documentary The Times of Harvey Milk, newly remastered for DVD on its 20th anniversary. I look forward to seeing it again, a wonderful feature-length documentary with interviews and footage of the real life Harvey Milk and his adversaries. This was the first time the story won an Academy Award but not, I suspect, the last.