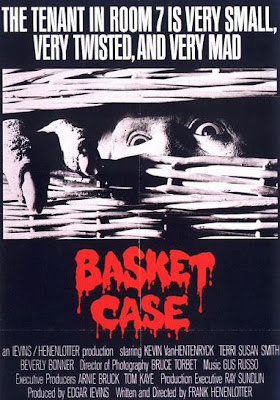 BASKET CASE
(1982, USA)
This is a film that I was told I absolutely had to see when it came out. It was right up my alley and while it's not as essential now, it's still a hamper full of gory fun.

Duane Bradley carries his hideously deformed, psychotic brother around in a wicker basket, on a mission to track down and avenge the surgical team who separated them as Siamese twins… 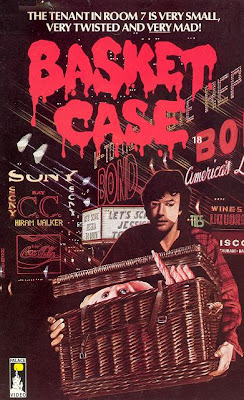 Rental VHS cover art in the UK
Set in Manhattan's Times Square when it was more red light district than tourist trap, this low budget horror looks definitively grindhouse. At the time, it became a huge success on video, even though most of the gore had been censored out. Basket Case looked as grainy and low-budget as The Evil Dead, but was more like Evil Dead II with it’s mix of blood-letting and black humour.

Basket Case continues in the vein of sexual comedy horror that peaked in the 1970s with Andy Warhol’s Blood For Dracula and Flesh For Frankenstein (1973), and predates Stuart Gordon’s slicker Re-animator (1985). The extreme blood-letting was tempered by the over-the-top tongue-in-cheek approach, yet adult enough to include sexuality and nudity, which many American horrors shied away from.

The film features a wide mixture of good and bad acting talent, though Kevin Van Hentenryck as the amiable Duane holds the whole film together. The special effects are hit and miss, but take on a surreal charm - the evil twin Belial certainly has character and, for a lump of rubber, even delivers pathos. The wealth of ideas and humour in the script make it very watchable today. As do the women's bizarrely thick hairstyles, though they're no match for the sheer size of Duane's naturally curly perm.

Basket Case aimed to out-gore anything else around at the time. The murders are sometimes cheated off camera, but are amusingly inventive and usually ludicrous. Belial's revenge involved separating his victims, when though they're not Siamese twins... 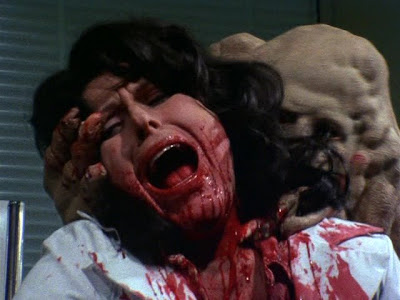 The scalpels in the face scene is my favourite for delirious horror movie acting - revelling in excess, echoing the screaming women of old movie posters, rather than anything distressingly realistic. Gore can be fun! Diana Browne, as Dr Kutter, would have got my vote for ‘best performance in a death scene’ that year, if there was such a thing.

As Belial gets jealous of his relatively normal brother having a relationship, sex rears its ugly head. But Henenlotter keeps the sexual interests of his audiences fairly well balanced, featuring male and female nudity, and even male full frontal shots, rare in any film.

For a perilously low budget, Henenlotter wrote and directed a great film, making the most of the atmosphere of the down-at-heel locations. He became an essential director for a few years, keeping fans happy with two Basket Case sequels, Frankenhooker, and the marvellous Brain Damage (a title easily confused with Peter Jackson’s Brain Dead and Bad Taste).

It’s a shame he couldn’t keep it up – there’s a huge gap in his directorial career between Basket Case 3 and the recent Bad Biology, which I’ve yet to see, but it's out on DVD in February. Welcome back, Frank! 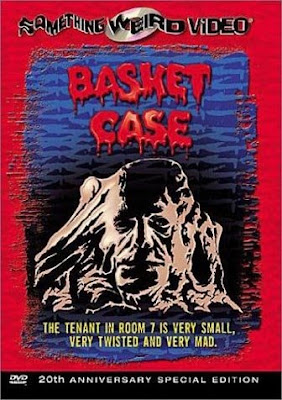 I watched this again on the Something Weird DVD which is presented 4:3 full-frame, hinting that it was framed as much for home video as cinemas. The extras include a commentary track, some great out-takes and a lively tour round the filming locations with the director. The picture looks far less grainy than I remembered it and the dialogue is clearly audible - it wasn't always easy to hear in cinemas and on VHS.