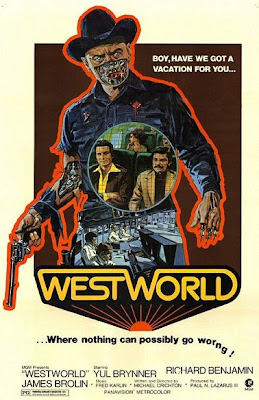 
You planning a trip to the Delos resort. Would you choose Romanworld, Westworld, Futureworld or Beyond?

Science fiction has long toyed with the concepts of sophisticated humanoid robots being able to replace humans. TV and film producers love the idea of robots that look like people because building robots is very expensive - Robby the Robot in Forbidden Planet (1956) was the most expensive prop in the film. Robots that look like humans (androids, to be exact) are a very cheap special effect.

In the 1970's, writers were still being inspired by the technology of the Disneyland theme park attractions, like the animatronic Hall of Presidents, and the Pirates of the Caribbean ride. This was specifically referenced in the 1975 thriller made of Ira Levin’s The Stepford Wives, and in Westworld - an expensive playground where adults dress up as cowboys, shoot gunslinger robots and shag-robot dancing girls. 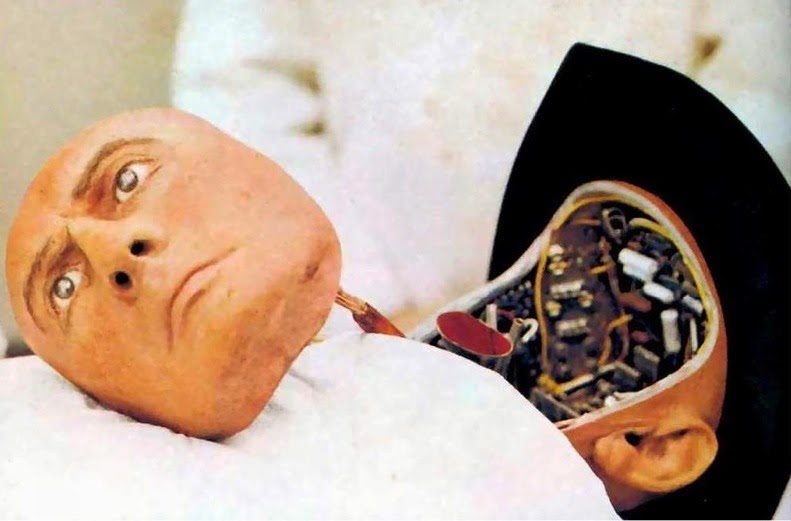 While it didn’t predict that the electronic games of Pong would evolve into virtual reality gaming, the writer envisaged a reality re-created on a Hollywood-style set with robots fulfilling sexual and violent fantasies. In retrospect, I don’t think everyone would want to live out their fantasies in public, and not many businesses could really make money out of building expensive robots but having to repair their gunshots every night. But it seemed like a good idea at the time. 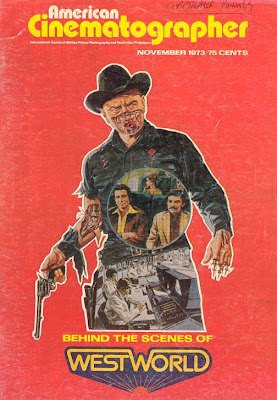 Written and directed by Michael Crichton, on a roll between medical sci-fi thrillers The Andromeda Strain (1971, based on his novel) and Coma (1978, which he directed), he injects a problem into the computerised resort. The machines start breaking down in a pattern that spreads like a disease, thus predicting the computer virus, but calling it a "central mechanism psychosis". Of course, this plot device was recycled for Jurassic Park (1993).

Westworld caught the public imagination at the time, though it was a hard project to find financial backing. Crichton describes his script getting turned down all around town – perhaps executives liked big stars and directors with good track records more than they liked original stories. As a result, the movie is low budget, but still considerably smarter looking than other pre-Star Wars sci-fi at the time. After a lengthy set-up to explain what the Delos resort is all about, and some lightweight comedy padding (like the low-rent balsawood bar-room brawl), the pace tightens considerably as things start to go wornnnng… With the robot gunslinger programmed to get into fights, but his fail safe mechanisms deactivated, a deadly chase begins. As the other guests get massacred, one survivor has to fend off the unstoppable top-of-the-range killing machine…

This was an early starring role for James Brolin, before he rounded off the decade with genre classics The Car, Capricorn One (1978) and The Amityville Horror (1979). Richard Benjamin is better known for comedy, like the Dracula spoof Love at First Bite, but this and Catch 22 proved he had more range. Of course, Yul Brynner efortlessly recreates the look of his character from The Magnificent Seven (1960). His silvered eyes and removable face giving away his robotic status. 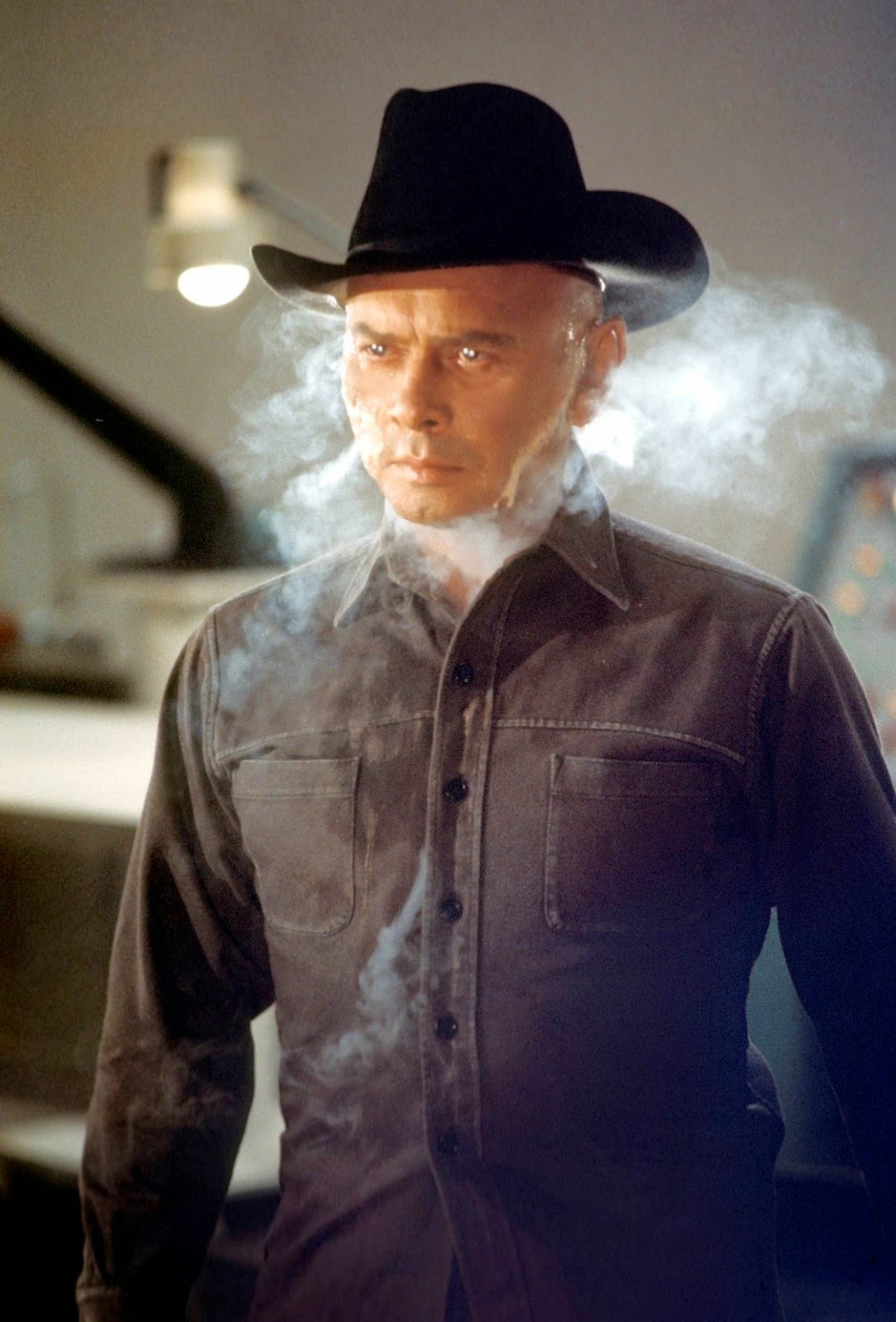 The functional sets are under-dressed and flatly lit, though the endless white corridors of the Delos resort work well as a maze. You can tell it from a TV movie by the 2.35 widescreen aspect, the bloody slow-motion squibs, and the hints of cyber-sex. In the UK, it got an AA certificate, restricting under 14’s from seeing it. I first saw it on a double-bill with Soylent Green.

The long final act with the unstoppable robot with infra-red vision anticipates elements of The Terminator, Predator (right down to a crucial plot point), even the robo-vision of Robocop. In fact, the American Cinematographer articles about Westworld (November 73 issue) point out that the gunslinger’s electronic viewpoint was the first sequence to use actual computer imaging – the footage was scanned in, digitally simplified and played out again. Westworld also features an early instance of the baddie who won't stay dead (before Jason Vorhees, Michael Myers or The Terminator). 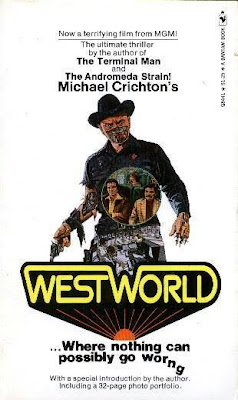 The paperback tie-in book (above) that was sold at the time was simply a draft of the script, as it stood just before filming began – with a different ending to the film. It has an interesting and thorough introduction by Crichton, talking about the making of the film. 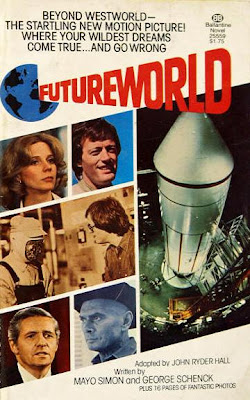 Westworld spawned a sequel in 1976, but Futureworld wasn’t written by Crichton. It picks up years after the Delos disaster, replacing the resort of Westworld with an outer space simulation. But somehow the relaunch of the resort to the public also incorporates a sinister bid at world domination (a story continued in the short-lived 1980 TV series Beyond Westworld). 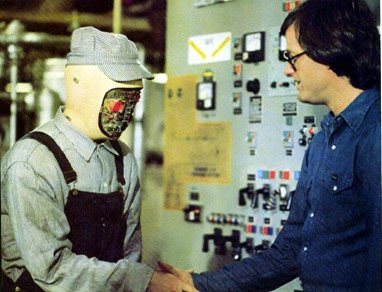 The story isn't as intersting as the actual NASA hardware used as a backdrop, all far more impressive than the many dull predictions of 'future' technology - holographic chess, dream machines, remote-controlled robot boxing… I remember it even being unexciting at the time. 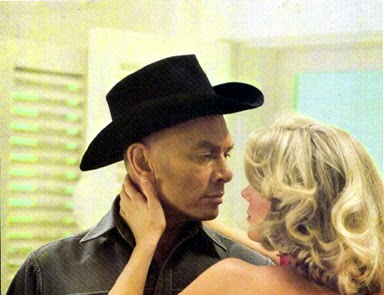 They even throw away the return of the Gunslinger character, using him for seduction rather than gunplay. But it’s not every day you can say that you’ve seen Gwyneth Paltrow’s mum (Blythe Danner) making love to a robot (Yul Brynner). Peter Fonda and Arthur Hill starred, though Danner's character makes more of an impression, playing a fiesty journalist. 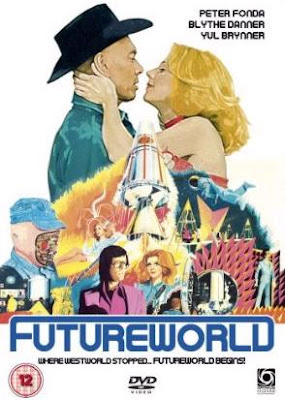 Futureworld has had a PAL region 2 DVD release in the UK.