Another example of preserving a movie… from its director…

In the mid-seventies, by the time I was old enough to see A Clockwork Orange in the cinema, director Stanley Kubrick had withdrawn the film from circulation. My first experience of the story was therefore from Anthony Burgess’ novel, and then the illustrated screenplay from the local library. It wasn’t until 1989 that I finally saw the film on a bootleg VHS. (It then officially re-emerged in Britain in cinemas, DVD and TV, after Kubrick’s death in 1999).

So back in 1979, I was expecting The Warriors to be the next best thing. A near-future metropolitan tale of gang warfare. Once again, the film was preceded in the UK by newspaper stories about gang violence in cinemas. But unlike A Clockwork Orange, the gang members aren't amoral, and the establishment is always one step behind. As for the ultra-violence that I was expecting, the gang fights were edited and staged Peckinpah-style as entertainment. Rather than the realistically shocking scenes also depicted that year, in Scum. In any case, I was still impressed, and looked forward to future projects by Walter Hill. But for years afterwards, The Warriors was misrepresented on home video. The VHS releases had a re-edited music score, changing some of the songs used on the mysterious radio station. Then the DVD release only had a mono soundtrack, despite the importance of music to the film. The early DVD release was presented in widescreen, but non-anamorphic.

In 2005, when we finally get it in stereo, 5.1 even, it’s a version of the film called the ‘Ultimate Director’s Cut’, without the option of seeing it in the original form. This remastered version is substantially the same as the original. There’s now a tacked-on introduction, that looks like video rather than film, but all of the original scenes are still present in the new cut. There are also no new ones (despite a sticker on the DVD packaging promising seven new scenes!), making it unremarkable as Director's Cuts go, ultimate or otherwise. There’s still a glimpse of the originally-filmed prologue in the accompanying documentary, but this scene was removed before the film was exhibited. It showed the Warriors’ leader Cleon talking to his girlfriend (who never appears again) in the Coney Island fairground in the daytime before it all kicks off. This was never officially part of the film, even though it appeared in a British 'Moviedrome' TV showing, presented as ‘the original version’. The producers correctly removed this scene so that the film started at night-time, and not showing daylight until the end of the story.

To replace the exposition from this removed opening scene, the director shot extra scenes and intercut them into the title sequence. These flashbacks, the subway train at night, the graffiti-like opening titles, all mesh to become the exciting, hit-the-ground running start to the story. The Director's Cut adds a narrated prologue about a Greek warrior who also fought all odds to get back to the sea. Where are the producers to lop off slow-moving introductions when you need them?

The Greek influence is there in the story anyway, and didn’t need highlighting again. Some of the characters’ names (taken from Sol Yurick’s novel) also hint at the Greek legend. This new prologue does nothing but derail the start with an unenlightening subtext. My other gripe about this Director's Cut is the only other change that’s been made. From out of nowhere, the director now presents the film as if it was a comic strip. With newly-created comic book frame transitions between scenes. Hill now admits he’s embarrassed by the simplistic premise of the film, and compares the characters to those from kids' comics. He points out the lack of damage that the heroes suffer in a fight with baseball bats as evidence. But unrealistic violence happens in most adult action thrillers and this realisation isn't where his intentions were when he made the film - it's a retrospective fix. A redux. Not his original cut.

If he wanted to be more accurate, retrospectively, I would have thought that the scenario more closely resembles a video game – with the low numbers of New Yorkers on the streets, a dot-to-dot story, and easily recognisable goodies and baddies.

These changes are annoying but not too damaging. The qualities of the film are still on show. Particularly the impressive opening scene, as every gang in New York meets to plot a lucrative team-up, united by the charismatic leader, Cyrus. 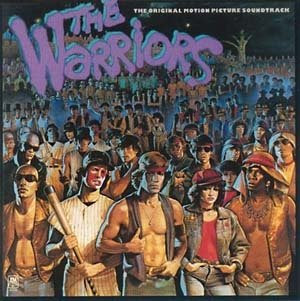 Planning a movie shoot where hundreds of gang members begin organising a Manhattan crimewave, at the same time as asking the Mayor of New York for dozens of location permits, seems ridiculous. But they were allowed to shoot almost all of the film on location all over New York, and extensively on the subway.

The episodic action set pieces, iconic characters, wry dialogue, terrifying gangs... all make for a unique experience. Especially the Baseball Furies with their bats, 'Kiss' make-up, and nightmarish, tireless running. But real-life fighting in cinemas damaged the success of the film and turned it from hit to cult. Inner sleeve of the vinyl soundtrack


For a while, the only legacy of the film was the snips of dialogue, used in the soundtrack album, making them instantly accessible for sampling. Specifically, Cyrus’ inspirational speech (“Can you dig it?”), the Riffs leader (“Who are The Warriors?”), and Luther’s wavery psycho taunts (“Warriors, come out to plaaay-ee-aaay!”). The songs on the soundtrack are actually soft rock (including a memorable closing song from Joe Walsh) and only Barry De Vorzon’s driving electro score totally fits the atmosphere. His music opens the film and plays behind the pivotal fight scenes.

Although Walter Hill originally wanted a primarily black and latino cast, the movie sidesteps a racially-divided gang culture, by mixing up the members in each, right down to the skinhead gang.

Also to avoid controversy, the Warriors are very moral. Despite having the opportunity, these guys don’t harrass helpless women, they fight only in self-defence, and as a last resort. The violence isn't realistic either - the only blood that’s drawn is when a policeman hits someone who’s already in handcuffs. Sneaky.

The best thing about the Ultimate Director's Cut DVD, is the documentary with it. Like watching The Monster Squad special edition on the same weekend, it was sometimes painful to 'catch up' with people after several decades. The Warriors' leader Michael Beck is barely recognisable. One suspects that starring in Xanadu was not a good way to build on his success, and this is the first time I’ve seen him in anything in 25 years.

For fans of the film, there’s some great behind-the-scenes stories, and it’s good to see Deborah Van Valkenburgh (also in Walter Hill’s Streets of Fire), David Patrick Kelly (Commando, Twin Peaks) and other gang members again. Though only James Remar (as Ajax) seems to have worked solidly since. The Warriors is still highly recommended, but once again, the Director's Cut isn’t the version that was originally shown in cinemas. For the moment, it’s another instance of a new release unable to replace the old. I'm hanging onto this one (above) thank you very much. The new cut is available on DVD as well as HD-DVD and Blu-Ray, dammit.