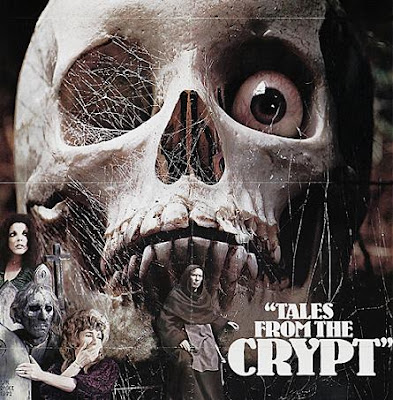 Updated November 2007
One of the best Amicus films and certainly the most consistent 'portmanteau' horror from that period. Thankfully, there are no 'comedy relief' segments included here - just solid non-stop scares.

The film's five tales are all based on stories from the original EC horror comics Tales from the Crypt and Vault of Horror. Linking the tales is Sir Ralph Richardson as the first screen incarnation of the Crypt-keeper. His piercing and accusatory questioning suitably transfixes the five tourists lost in his catacombs. As the Crypt-keeper asks each lost soul why they have come here, they tell their stories in turn - tales of deception, murder and life beyond death... 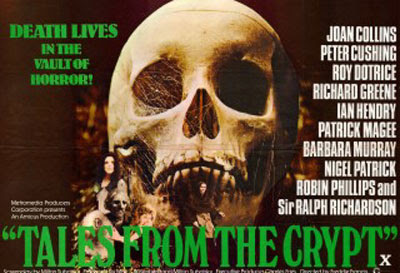 Among the cult British cast are Patrick Magee, (shortly after his appearance in Kubrick's A Clockwork Orange), Roy Dotrice, Ian Hendry and Joan Collins. The film's standout performance is from Peter Cushing, playing a victimised widower - it's very sad to watch him here, as he had recently lost his own wife. He won one of his few awards for this role and, without spoiling it too much, this is also a rare occasion when Cushing appears in 'monster' make-up, sparingly but brilliantly applied by Roy Ashton. The brief scenes of his 'little walk' provided some of the best publicity stills. 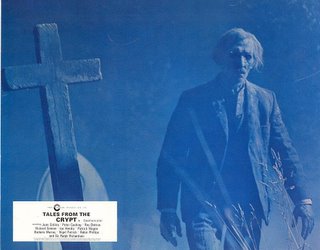 Cushing's role typifies the film's approach - to turn characters that were originally comic strip stereotypes into real people. In addition, the pervading grim atmosphere makes this 'compendium' horror far more successful than Vault of Horror or The House That Dripped Blood, both of which have comedic episodes.

The poster for the film also included my favourite scary movie skull - it was also on the cover of the paperback novelisation - the only merchandise from the film. The skull warns potential viewers of the pervasive atmosphere of premature death and is a visual link with the deathmask motorbike rider in 'The Monkey's Paw' segment.


It's been released on a double-bill with another short-story structured Amicus film, Vault of Horror, which is also widescreen, but unfortunately censored. Tales of the Crypt on the other hand, is not only the first time on DVD, but also the first time uncensored on home video.

An original trailer for Tales from the Crypt... 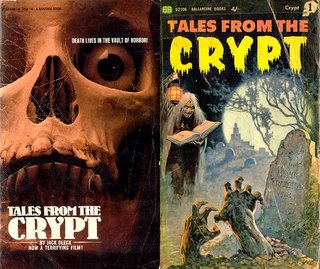 Here's the cover of the novelisation, and the 1964 paperback of EC Comic reprints which luckily includes four of the five stories adapted for this film!

The movie's opening theme is Bach's 'Toccata and Fugue in D minor' - this was a much overused tune in the horror genre - the most likely music to be played by any villain who owns a church organ - but this is my favourite rendition. 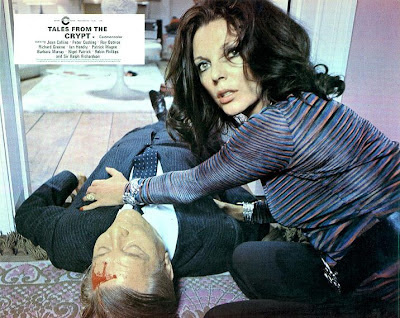 Presumably the delay getting Tales From The Crypt onto DVD was because of conflicting rights issues? Surely there was enough leeway not to confuse it with the nineties movies and the TV series? 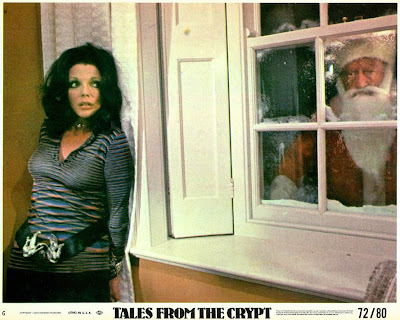 Coincidentally, both the 1972 and 1989 films start off with an adaption of the same 'psycho-Santa' story ('And All Through The House'). You are therefore invited to make a side-by-side comparison and choose whether you like your EC horror played straight, or for laughs... 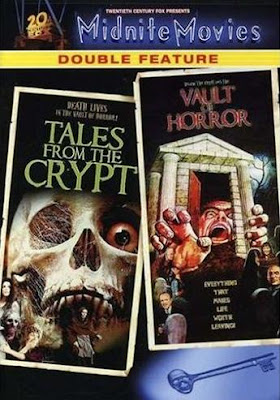