GHOST IN THE SHELL - A phenomenal overview GHOST IN THE SHELL:
STAND ALONE COMPLEX
(2003, Japan, anime TV series)
If you feel deprived of intelligent sci-fi, or are a big fan of Blade Runner, or want to try out an anime series that's not about children with magical pets, this could be the one for you. Until Akira was released in the UK, I'd not seen any adult anime. Then there was a gap of a few years while I struggled to find anything nearly as good. Ghost in the Shell: Stand Alone Complex boasts spectacular action, a peek into a likely future, must-have robots and major babe Motoko Kusanagi - she's all android...


THE STORY SO FAR
First, I'll attempt to summarise the various incarnations on DVD, because there's an awful lot of Ghost in the Shell out there...

Ghost in the Shell: Solid State Society (2006) - the third story for TV, is a single feature-length episode


GHOST IN THE SHELL - the beginning
Masamune Shirow (also the author of Appleseed) first wrote and drew the obsessively detailed manga in 1991. It described the adventures of Section 9, a heavily armed secret police force in a near-future Tokyo.

The squad is headed by a brilliant political strategist - 'old man' Aramaki. He's supported by Major Motoko Kusanagi, a completely synthetic super-soldier, disarmingly disguised as a sex-bomb. She is the poster girl for the entire franchise, and the most obvious requirement of an anime nominally aimed at teenagers. Her closest ally is the mostly-human Batou, his steely eyes betraying that he has been partly cyberized (a process equivalent to bionics).

There's also a brainy bearded super-hacker and a token all-human policeman. They're all connected by internally-installed audio-visual communications, that looks like telepathy to outsiders.

The manga inspired the influential film, directed by Mamoru Oshii, which in turn eventually lead to the TV series, which explores an alternate timeline to the film. STAND ALONE COMPLEX - first gig
I’ve just finished rewatching the first TV series (a term that doesn't do it justice). It's an epic achievement from the Japanese animation house Production I.G. It looks like a big-budget showreel and was created entirely on computer, when most anime was either still painted on cels, or too electronically 'video' a look (like Ghost Stories). It was recorded on High Definition masters, following the one-off experiment Blood - the Last Vampire. Again, the animation is state of the art for TV, 2D characters successfully mixing with 3D vehicles and robots.

Besides the cutting-edge production techniques, the story-telling is just as intricate and pitched at adults, without surrendering to excessive gore or nudity. There are pure sci-fi concepts, intricate plots, predictive designwork, and hard-hitting action.

Watching the series is like looking into the future, seeing technology that will exist one day, and the programme creators are already wrestling with the sociological problems that will arrive with it, as well as making it all look good!

Anyone who gets cybernetic brains or eyes could be also be online... and therefore hackable. Other individuals won’t trust these artificial body-parts, however advantageous. And how will people cope when they become emotionally attached to completely lifelike androids…

The feelings of artificial humans have been a prime concern to Japanese storytellers for decades, particularly in the Astro Boy series. In the Ghost in the Shell stories, the Major (and the tachikoma) are constantly aware of the differences between them and humans. The crux of the matter is if they can have a spirit, or 'ghost'.

The non-humanoid A.I. devices are more expendable than soldiers, but how sophisticated can the A.I. be allowed to get? The totally robotic tachikoma droids for instance, that assist Section 9, are slightly too intelligent and prone to individuality. They are impressively designed and are the most likeable characters, possessing mischievous child-like innocence.

Besides an almost unfathomable series-length story arc, about a kidnap plot involving a faceless hacker, there are many single episode stories that are easier to grasp, each tackling a techological theme as well as telling a 'stand alone' story.

An amazing amount of research and design-work goes into the hardware on display, even if it's only seen in a couple of shots. The implications of many designs is almost mind-expanding. Though it remains a puzzle why the ghastly 1980's mullet hairstyle is back in fashion.

The series has been sold in a variety of DVD sets around the world. I opted for a region 1 set, to avoid standards conversion artefacts. There's also a special edition available with DTS audio, rather than just 5.1. Both series were produced in a 16:9 aspect ratio, like most big-budget TV anime is now. OTHER G.I.T.S.
The second TV series was just as long and complicated, Ghost In The Shell SAC 2nd Gig. I didn't enjoy this story nearly as much - the scale of the plot got way too big, the issue being a burgeoning civil war with an unhappy immigrant workforce. The focus shifted from the problems of future technology, to possible political situations, something too huge and messy to be solved by even a crack team of cyber-police. I will rewatch and reappraise it, because I love the characters, but it didn't feel as much like a 'ghost' story. After the second series was over, the first was boiled down to make a single straight-to-video feature, focussing on just the story arc. Called Ghost in the Shell - The Laughing Man, it has had additional scenes to bridge gaps in the narrative, and has had some animation reworked for continuity purposes. For instance, the Major's hairstyle 'evolved' during the lengthy 26 episodes. Her look was standardised for this cutdown version. With the spectacular second film, Ghost in the Shell 2: Innocence, not scoring a hit, even in Japan, despite being a visual masterpiece, no further G.I.T.S. feature films are currently likely, so I hope that the TV projects continue. The third TV incarnation - Solid State Society, is a straight-to-video feature-length episode, that is now available in the UK and US.

There are also rumours of a live-action American remake of the first film – this would need a lot of money, but could it succeed where Aeon Flux failed? I’d rather see new stories as anime, rather than dumbing down the original story for a mass market.

G.I.T.S. MERCHANDISE
A phenomenon like this spawns goodies. Lots. Here's a few of my faves: 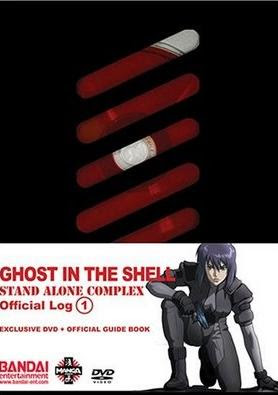 Essential was the series guidebook, Ghost in the Shell - Stand Alone Complex: Official Log (Volume 1), which helps list and explain some of the background details in each of the first 20 episodes of the first series. Unfortunately, the second volume has yet to be translated into English. A DVD is included that groups the behind-the-scenes interviews onto one disc, as well as featuring a fantastic showreel for the series, with montages on vehicles, weapons and practically all the action scenes. 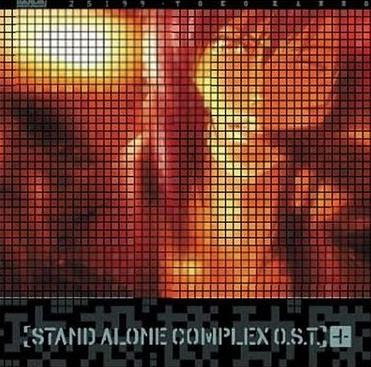 The most creative spin-offs from the series have been the many CD soundtracks. Besides writing the usual fast-paced electro background music, composer Yoko Kanno collaborated with a variety of artists to produce futuristic music and a unique theme tune. Her first, with Russian singer Origa, backs the impressive opening sequence. After years of waiting, the tachikoma robots have finally been released in the form of intricately jointed and detailed 'toys'. There are plastic and die-cast versions of these cleverly designed robots.

And of course there's the manga stories, still being translated into English, video games, novels, action figures...
Posted by Mark Hodgson at 1:59 am