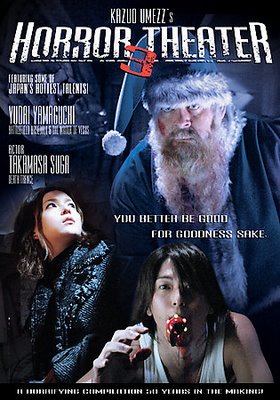 I watched the third and final volume of this series of adaptions of Kazuo Umezu manga, (see also the reviews for one and two). While Volume Two could have been aimed at children (just like Umezu's manga), Volume Three is decidedly more adult, and very different from the original stories.


THE PRESENT
is almost a Japanese version of the Silent Night Deadly Night films, with a group of young people trapped in a hotel with a killer Santa Claus, or rather, what Kazz’s idea of who Santa is. The director and writer obviously enjoy slasher movies, making this tale so gory it’s almost out of place with the rest of the series.

It’s also unpredictable, despite the premise, and would have been totally successful if the central Santa character wasn’t so wooden. Despite some slasher figures in the past being famously played by stuntmen or non-actors picked for their stature, the western actor here doesn’t bring sufficient menace, despite his extremely bloody crimes. There’s a scene when he stares at a helpless victim and moves his head inquiringly, just like Leatherface – but he looks like he’s just following directions, rather than ‘in the moment’. 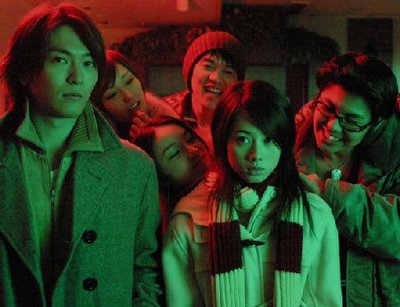 The cast of The Present regret being naughty not nice

Despite the fairly flat ‘video look’, the production team push the format to the limit with coloured lighting and dynamic angles, coming up with a memorable nightmare with some wildly gory imagery. Together with some experimental editing and black humour, this was the freshest episode in the series that actually delivered some horror.

I’m not sure that this was the wisest thing to watch on Christmas Eve, though.

DEATH MAKE
on the other hand, is a rather confusing mess. Kazz has updated an old story so much that it has transformed, not into something new, but into another old story of his - The Drifting Classroom (the movie version of which I really don’t recommend).

It starts off as a psychic ghost hunter TV show, a group of strangers locking themselves in an old warehouse at night. But so many different subplots emerge - with disappearing doors, characters manifesting their worst fears and supernatural insects appearing instead of ghosts (!), the plot of The Drifting Classroom seemed to be the only one that fit the bill, right down to giant crab monsters (which the video effects budget wasn’t quite up to).

I suppose that not knowing the original manga tale didn’t help. The subtitles were also running out of patience, there were many vague translations and even some spelling mistakes. Still, it’s better than many other Japanese shot-on-video Tales of Terror, in that at least these stories are original, and not dependent on other people’s films – their roots are in decades old stories by Kazz.

Finally, could somebody tell me what the title Death Make refers to. I have no idea. 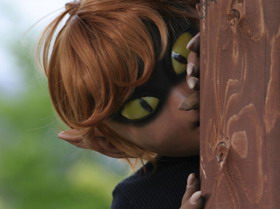 The unusual star of the Cat-Eyed Boy
I’m optimistic that we will see better Umezu adaptions soon – such as God’s Left Hand, Devil's Right Hand (the link is for a trailer on Ryuganji) and Cat-Eyed Boy (Nekome Kozo) both of which could be on subtitled DVDs soon.
- - - - - - -
Posted by Mark Hodgson at 11:33 pm