THE SUBMERSION OF JAPAN (1973) a disasters movie 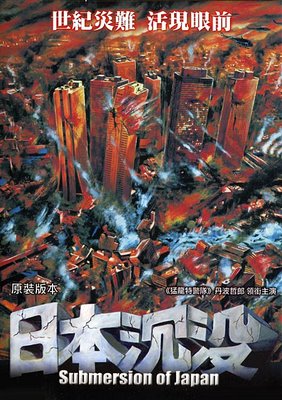 THE SUBMERSION OF JAPAN
(1973, Japan, Nippon Chinbotsu)
a.k.a. TIDAL WAVE (US version)
a.k.a. JAPAN SINKS

Tokyo is the first to go
A spectacular disaster movie that was made in Japan, before the disaster movie cycle was underway in the USA. This has several disasters in one: volcanoes, tidal waves, earthquakes, and a crack in the world that’s opening up beneath the entire country…

Based on a Japanese bestseller, this looks like a Godzilla movie, but without the giant monsters. There are many characters, many meetings, and plenty of modelwork to show the destruction of various cities around Japan.

It’s not influenced by the American disaster movies, and sets the tone for the sombre Japanese catastrophe cinema of the 1970's. The Last Days of Planet Earth (1974) envisaged the bleak, catastrophic prophecies of Nostradamus, and even a simple runaway train thriller like The Bullet Train (1975) became a long-winded and downbeat thriller.

Unlike the jaunty action-packed American disaster films Earthquake (1974) and The Towering Inferno (1974), there are too few characters 'on the receiving end' to identify with. The focus is mostly on the authorities and how they cope with the impending disaster. The Prime Minister takes centre stage as he decides the fate of the Japanese race, aided by a stressed-out scientist Tadokoro (Keiju Kobayashi) and a young, daring oceanologist, Toshio (Hiroshi Fujioka). 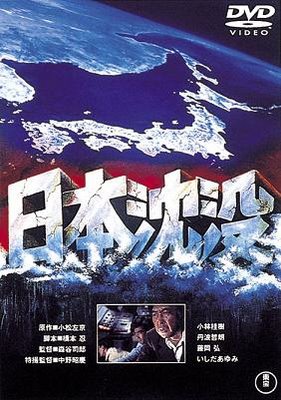 The Japanese DVD cover for the 1973 version (no English subtitles)
shows Professor Tadokoro submerged in his work
Mind you, there are a few shots that look familiar – the Tokyo earthquake shows a woman with glass sticking out of her face, in a similar shot to one in Earthquake the following year.

But the disasters in this film happen to mostly faceless crowds of people who’ve not been introduced, making the action scenes uninvolving, and more like news footage.

The scenes are a mix of large-scale model work and real-life volcano footage. Occasionally it’s hard to tell the two apart. The FX team are challenged by having to show such large scale destruction, often from very high altitudes in order to show Japan’s changing geography! There are some FX stills here, together with the US poster (as Tidal Wave). There's also marvellous Japanese poster artwork here on Toho Kingdom.

The film takes a long while to get underway, with a long first act involving a science team snooping around in a research submarine, trying to figure out why a small island sank near the coast of Japan. This is followed by some geology lessons about plate tectonics that you really should already know if you’d attended your geography lessons. The movement of the Earth’s mantle, like the plot, is very, very slow. The action kicked in just before I (continentally) drifted off.

The cast keep the film afloat, with Tetsuro Tamba as the Prime Minister you’d want in charge on such a day. The scene where he is presented with the possible outcomes facing the Japanese people is done almost in one shot, and very emotionally. The veteran actor also appeared in the 2006 remake (based on the same book) shortly before he passed away. 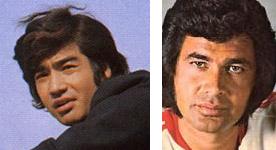 Hiroshi Fujioka and Englebert Humperdinck
Though he doesn’t really have any action scenes, Hiroshi Fujioka is a dynamic presence, no doubt adrenalised by playing the first Kamen Rider in 1971 (Toei Studios' answer to Ultraman). With his wall to wall hair and mega sideburns, he looks like Japan’s answer to pop star Englebert Humperdinck. It’s no coincidence that the actor also appears in the 2006 Japanese genre spoof Everyone But Japan Sinks, (from the makers of The Calamari Wrestler). This is also available now on region 3 DVD. 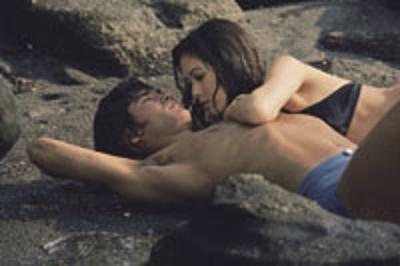 A scene that's NOT in the Hong Kong DVD version
The Submersion of Japan DVD seems to be an international version aimed at the rest of the Asian market, and is shorter than the 143 minute Japanese original. It runs close to 110 minutes, whereas the rejigged USA cut (Tidal Wave) was only 82 minutes long, which also included extra scenes with Lorne Green as the US President. The tsunami is only a short sequence in the original, but I’ve not seen the US version.

Fans of Godzilla movie music may be familiar with the music of Masaru Satô. You can almost hear strains of Ebirah - Horror of the Deep (1966) and Godzilla vs. Mechagodzilla (1974) in the soundtrack.

The region 3 DVD of this 1973 film (cover art at top) is 2.35 anamorphic widescreen, but the visual detail is quite soft. But the audio is the main drawback - the 5.1 and stereo Japanese audio tracks are prone to loud background hiss, which gets louder whenever there’s not much level. It sounds like an automatic gain keeps pushing up the sound of silence. This is annoying during the quieter early scenes. The English subtitles are well-translated and well-timed. The DVD has no extras on it. 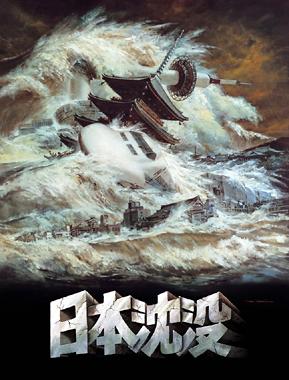