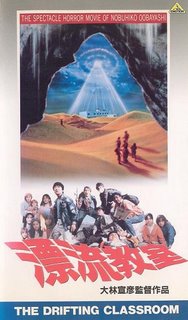 As for you Troy Donahue...

I was looking forward to this too. As Kazuo Umezu's original manga epic from 1972 is finally being published in an English translation, I wondered why this 1987 film adaption wasn’t on DVD, even in Japan. But having seen it on a Japanese VHS (pictured above), now I know why.

I can’t begin to tell you how awful this film is. It makes Jaws III look good.

If Ed Wood had directed Stargate as a horror film, with a child cast, the result would be something like The Drifting Classroom...

THE PLOT
The film begins with a scene full of what must be the most disrespectful behaviour by a teenager shown to his mother. Young Sho's bizarre misbehaviour warrants a spectacular clout from Mum, and he slouches off to school, not realising he's about to be separated from her for a very long time.

His High School is 'Kobe International', which means that the cast is full of English-speaking students and teachers. (This isn’t from the manga, it’sjust an ordinary Japanese High School).

Then (possibly) a tornado approaches the school and whisks the whole school building away. But unlike Dorothy, we don't arrive in Oz but in a strange and hostile place far away, in the middle of a sandstorm.

All that’s left is a crater in the ground (reminiscent of The Outer Limits classic episode 'A Feasibility Study'). Sho's mother is distraught, but in the weeks that follow she find clues that their children may still be OK.

Meanwhile the school seems to be in a different dimension, possibly in another timeframe. At first they assume that a quake or a nuke has hit them. Besides food and water shortages, the children have to face both madness and monsters if they are to survive…

THE FILM:
There are more than a couple of problems with the film - the story, the dialogue, most of the cast and the special effects…

The film is Japanese but half of the dialogue is in English. The cast are mostly bilingual children who are certainly not actors - they say the lines, sometimes inaudibly, but don’t act them. The few Japanese actors in the cast are very good, but have to say half their lines in cracked english.

The many secondary characters are given one trait each (one is always hungry, one has a moneybox, one missed a football match etc) and these motivations are their only motivation throughout the next two hours of screen time.

The murky print and murky transfer on the Japanese VHS that I watched rendered much of the action indecipherable. When the building ‘takes off’, the kids are screaming and trying to avoid a flood of sand pouring through the building, in a sequence that goes on for ages – the actors must have filmed in very uncomfortable conditions. But with the camera shaking, and optical flashing effects blinding me, I’d no clue what the hell was going on.

The special effects are mostly poor. Even basic compositing of characters against the model of the ‘time desert’ is often diabolically done - the camera zooms in on the foreground characters but the background doesn’t move! The matte paintings are very obvious throughout. Rarely do we think we’re in a desert. It’s ages before we get establishing shots to make us think we’re even in a desert.

Stranger still, for a film full of kids, there’s an awfully high ‘body-count’. The infantile schoolroom dialogue is completely at odds with the horrific death scenes – there’s a dead teacher with sand pouring out of her mouth, a maniac with a knife, kids on fire… But the survivors always seem to shrug it off and not mention it again.

This bizarre schizophrenic approach is at its most obviously awful near the end of the film, when the kids sing a truly horrendous musical medley of ‘The Camptown Ladies’, ‘Swanee River’ and ‘When the Saints Come Marching In’… with a trombone accompaniment.

The closing line of the film defies taste - one of the young kids says to the other, "I want to have your babies". I wonder if it was translated properly for the Japanese audience? 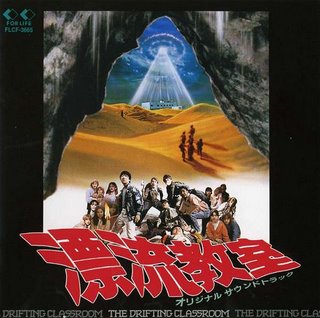 The only saving grace is the grand, memorable score from Joe Hisaishi (CD cover pictured above), who'd already started composing classic scores for the animated films of Hiyao Miyazaki.

The VHS was presented 1.85 widescreen (presumably to show the Japanese subtitles for the many English language scenes).

SUMMARY
Kazuo Umezu’s classic plot provided plenty of potential - but condensing his story into two (long) hours has disjointed the narrative. This film adaption failed to gauge the tone of the manga, where juvenile characters face up to the horror of a primitive alien existence.

Umezu's epic series is betrayed here, so please do the right thing, read the newly translated manga (Volume 1 pictured below) and don't let your curiosity encourage the exhumation of this schizoid movie oddity. 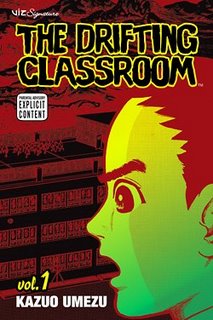 Volume 1 of the manga is out now, published by VIZ Media. In the back (er, front) there’s an excellent illustrated overview of his most famous stories. An excellent guide to the best of Kazz to come.