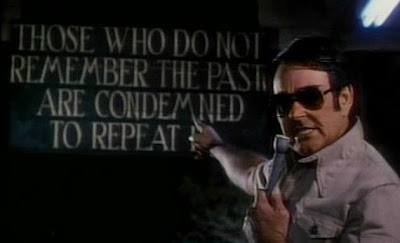 You want horror? Maybe this is too much...

Real horror, actual horror, is deeply upsetting. It would be wrong if it wasn't. But it's misleading that we describe ourselves as 'horror fans'. Perhaps this is why strangers treat us more cautiously. Perhaps they are worried that we might enjoy the horror of actual tragedies. Of course, what we mean is supernatural horror, fictional slashers, impossible monsters... rather than the extremes of actual suffering. I just want to warn you that this story shouldn't be treated lightly.

I've seen many documentaries and recreations of tragic events, but this one proved to be powerfully depressing. It wasn't simply that hundreds of people died, it was that they'd taken their own lives, all at the same time, because they were told to. One Sunday morning, late in 1978, I saw photographs of dead bodies, possibly for the first time. In a news magazine there were pages of colour photographs of the aftermath of Jonestown. If I'd seen photos like that before, they hadn't been in colour. Hundreds of people face down in mud. I still remember the brightly coloured t-shirts, the fact that there were children as well as adults, and I mistakenly assumed that the victims were South American.

I recently decided to learn more about the Jonestown 'massacre', prompted by the showing of a recent documentary on TV. I'd not considered the movie versions, assuming they were exploitation flicks. Curiosity now compelled me to see how the events were depicted and exploited. This is the type of incident that gets described as 'something out of a horror movie' and inevitably leads to one being made. But these dramatisations beg the question - is this really the way it happened? Were they actually made into horror films?

The first to be released was Guyana: Crime of the Century (also called Cult of the Damned) and was sold as horror. The events then appeared as a TV mini-series in 1980, Guyana Tragedy. From the cover art, I thought this was also exploitation, but the cast and the writing credentials are quite impressive. More recently in 2006, was a new documentary titled Jonestown. Interviews with survivors, relatives and eye-witnesses to the life and works of Jim Jones. I've watched all three. 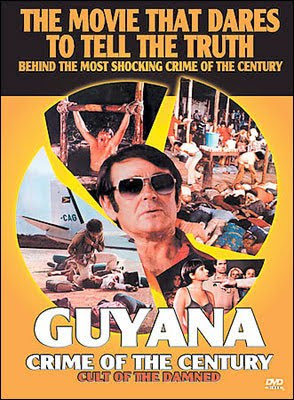 GUYANA: CRIME OF THE CENTURY
a.k.a. Cult of the Damned
(1979, Spain/Panama/Mexico)

There's a fine line between exploitation, and drama based on real events. The timing of this film and the TV movie both seemed far too soon to be at all respectful. In terms of accuracy they both appear realistic, but the exaggerated accent on torture and gunplay places Cult of the Damned firmly in the category of exploitation.

The fateful events at Jonestown climaxed in November 1978. As the news reports began, the scriptwriters must have started taking notes. The first finished version of this film, 110 minutes long, premiered only 10 months after the event! Their knowledge of the facts would have been limited, while investigations was still in progress. To cover themselves, they resorted to fictitious character names, even calling the Guyana encampment 'Johnsontown'!

This was directed by Rene Cardona Jr. Unsurprisingly, he was the scriptwriter on another true-life dramatisation - based on the story of the Andes air crash that resulted in cannibalism, Survive was also sold as horror. The result here is mostly lacking in drama or tension, even when you know what's going to happen. The first 90 minutes are very dull - the director only seems to take an interest whenever there's violence, like the opening scene with the splashiest onscreen pistol suicide I've seen.

It follows the events from Jones' church in San Francisco onwards. Stuart Whitman plays Jim Jones as an unconvincing bible-basher, no more enthusiastic than the average TV evangelist. Given such a meaty role, Whitman does very little with it. Yvonne De Carlo (The Munsters) and Bradford Dillman (Bug!) take their roles more seriously as Jones' colleagues. Gene Barry (The War of the Worlds) plays the congressman who visits 'Johnsontown', unwittingly triggering the fateful final events. Not a bad supporting cast, considering.

I can't say what's inaccurate about this version, but it's very noticeably a community of white people who travel down to Guyana, when in reality there was a majority of African-Americans. The jungle scenes are convincing to look at, right down to the look of the buildings and the chilling sign set up behind Jones' throne. It read 'Those who do not remember the past are condemned to repeat it' (see the screengrab at top). The film relishes in showing a few torture scenes and makes the most of any shootings, filmed with a handheld camera, as if the victims were being chased at close quarters.

The climax is simply staged but horrific, the most extended depiction of the events in the three versions I watched. But it succeeded at being the most powerful, possibly because I watched this first. It ends leaving many loose ends, with even the demise of many central characters not mentioned at all. Cult of the Damned also describes incidents not mentioned in the TV movie or the documentary. Is this because they never happened? One scene has the congressman's delegation demanding entry into a large warehouse, only to discover it's an overcrowded, under-equipped hospital. A turning point as they realise that 'Johnsontown' has serious problems...

VCI have released the film on DVD from a soft-looking transfer, letterboxed widescreen, with a muffled English-language audio track. This is the longest version of the film that was made. I think it's the original length cut that was released in Mexico. It was then re-edited and shortened for a US release. 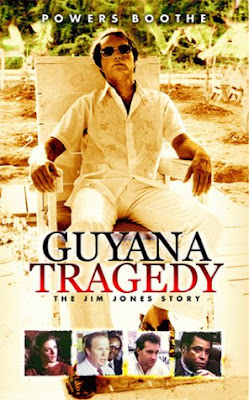 An impressive and accurate dramatisation

Three months after the US release of Cult of the Damned, came an impressive mini-series (shown as two back-to-back TV movies, I believe). The script was by Ernest Tidyman (The French Connection, Shaft), using the real names of characters and locations.

The research was partly based on a book and the news reports from The Washington Post. Many of the dramatised incidents are also described in the 2006 documentary, Jonestown - a testament to the accuracy of the research. Unlike the linear narrative of Cult of the Damned, Guyana Tragedy starts with Jim Jones in Jonestown, on his throne, haunted by memories of his lifetime.

With a three hour total running time, this story goes all the way back to his childhood. As Jones successfully built up a congregation in a rundown Indianapolis neighbourhood, he faced open and violent racial prejudice when he refused to restrict who was welcome in his church. His enormous success lead to a string of grateful property donations which built up his funds for a series of idealistic projects, centred around and communal living. He first set up an alternate society in the redwood forests of California, before moving to San Francisco.

Jones starts off as an inspirational figure, an outspoken socialist, and a challenger of racism. But ends up as a paranoid, power-mad dictator, over-reliant on drugs, punishing and sexually abusing members of his congregation. Whenever a scandal breaks publicly, he runs away, ending up in the South American jungle in a specially built community. When Jones believes the authorities are closing in, he simply talks his followers into the abyss. His ranting is based on an actual recording made at the time.

The climax is more dramatically staged than Cult of the Damned, with an impassioned eleventh hour challenge to Jones' decision. Powers Boothe (Southern Comfort, Frailty, Sin City, 24) rightfully won an Emmy for his performance as Jim Jones, though at the time he wondered if he'd ever work again.

I was glad to see Rosalind Cash - she was one of the highlights in The Omega Man, who I'd always hoped would get far more work after playing such a strong and impressive role. It's good to see her in another high-profile role.

The quality of the cast demonstrates what a major TV event this was, but the DVD makes it look like grindhouse that's not worth restoring. Hopefully such a major drama as this exists in better shape than this DVD from VCI. The soft image is the least of its problems. There are constant jumps and film faults. Missing frames, film damage, video faults and poor audio. This would look bad on VHS. 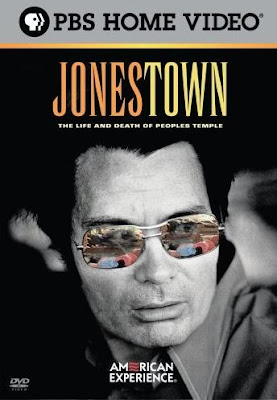 JONESTOWN: THE LIFE AND DEATH OF PEOPLES TEMPLE
(2006, USA)

I thought this documentary would contradict the old dramatisations, but it told many of the same stories as the TV movie. At least here there are interviews with many of the people who knew Jones at every stage of his life, even when he was a child. I was surprised that there were survivors of Jonestown.

There are still insights and surprises about Jones' life, not least his abuses of both his power and his parishioners. It details each of his projects, all of which he ends up running away from until there was nowhere else to run. The final mass suicide being described by eyewitnesses losing their entire families is of course both shocking and moving.

With a tragedy of this scale, I'm still struggling to understand how it could happen. The documentary gives valuable clues. For instance, Jones kept his followers sleep-deprived, and successfully isolated them from each other, even their own family. This infers he'd discovered (or, I'm guessing, borrowed) some efficient methods for keeping his followers faithful. Failing that, there were armed guards who patrolled the compound, supposedly to keep danger out...

The documentary is of course the most reliable and accessible way into the story, but I felt that both the dramatisations made more of an impact in the final scenes. I had to see it all to believe it could happen. However he convinced them, the fact remains that the majority of victims willingly drank poison, which was mixed in with a fruit drink. Today, the reference to "taking the Kool-Aid" are Jim Jones' only legacy. A rather flippant catchphrase derived from a truly horrendous event. 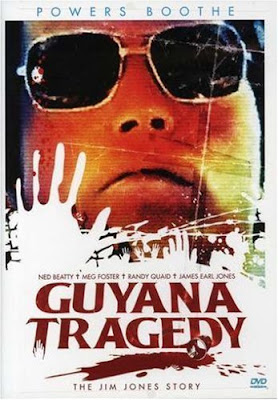 Jonestown the documentary is widely available (there's a trailer here on the UK site for Artefact Films) but I was surprised at how poorly treated the Emmy award-winning TV series looked on DVD. It's a powerful film with an excellent cast that still deserves an audience. There are several different DVDs out there. I hope that they are all better than the one (from VCI) that I saw (pictured above).

I previously compared documentaries to dramatisations of the Charles Manson murders and the 1972 Andes plane crash that inspired Survive! and Alive.

(Update April 2012: while the "taking the Kool-Aid" phrase was still being used on TV and in the political arena at the time of writing this, I've only just learned that the victims were actually drinking Flavor-Aid on that fateful day, a product similar to Kool-Aid.)